Finally The Taper Tantrum, Or What’s Wrong With August?

Finally The Taper Tantrum, Or What’s Wrong With August?

If you’re fortunate to be able to do this long enough, you’re absolutely assured to get caught with your pants down and almost certainly more than once. In the short run, it’s all a crapshoot anyway. Markets fluctuate and never, ever go in a straight line. And just when you claim to be right on top, they yank the rug right out from under your conceit(s).

I’ve spent the past few weeks, really months pointing out how Federal Reserve policymakers via their compliant media hasn’t been able to provoke anything out of bonds. Not for lack of trying. Zilch. Nada. Forget tantrum, a whole lot of nothing even though taper – we’re always told – would spell the death of the bond “bull.” I’ve been almost gleefully highlighting how this policy farce has been greeted as a complete non-issue across all of those markets.

Finally, yields backed up both then and today in a notable selloff. Is this the long-awaited tantrum? Could it be something else?

For the former, start with Fed Governor Christopher Waller. Recall on August 2nd how Mr. Waller had appeared on CNBC and became the first voting FOMC member to encourage not just taper but a very quick one so as to clear enough calendar for a hard 2022 liftoff in rates.

Just two days later, it might appear his “go early, go fast” mantra caught on with at least some parts of the yield curve. From August 5 forward, the long end of the Treasury curve has been backing up from that recent mid-year low. August 4 was the last time before what is now a multi-week somewhat modest possibly reflationary action.

Before crowning Waller’s confidence, that particular date – August 4 – should ring a bell. Wasn’t it just last year, 2020, that longer-term bond yields had likewise bottomed out on this same day? 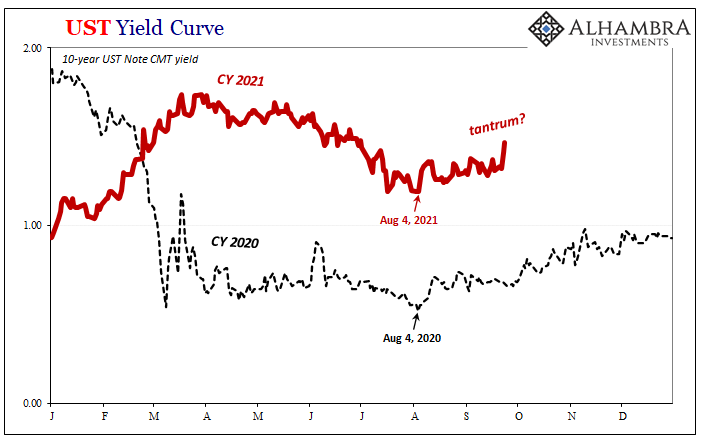 Obviously, the past two years began under very different circumstances; 2020 taking over from 2019 already close if not in recession (especially outside the US) and then the COVID errors. This year, 2021, opened in nearly opposite fashion with allegedly the whole world picking itself back up from all that damage and doing so boosted by every “stimulus” means known to man. Not just rebound, a fiery inflation-filled recovery.

Yet, in the middle of both there’s more the same than different – questions about the initial “V” shaped recovery (which did not pan out) last year and then a pretty conspicuous “growth scare” this year many are plain hoping they can blame on delta COVID for the “unexpected” soft patch.

You probably also remember how that same label “growth scare” was also thrown around quite liberally in 2019, too. Back then, the only part of the yield curve anyone is told to pay attention to had inverted, not just provoking rate cuts out of a befuddled Jay Powell but raising mainstream alarms as to impending recession (which may actually have happened, but we’ll never know for sure given the timing of the coronavirus pandemic). 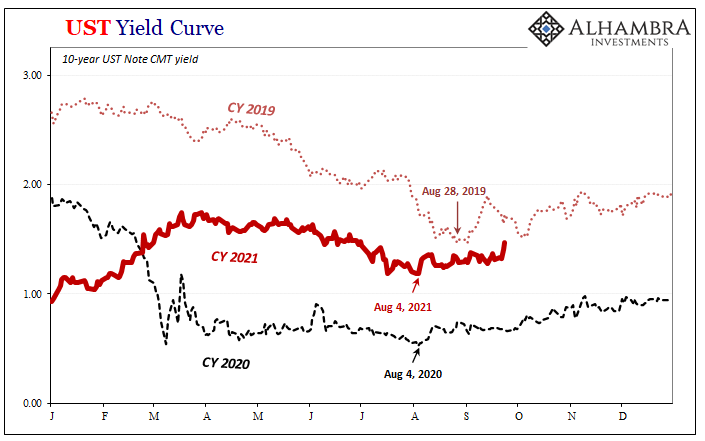 If twice could be random coincidence, yet three times is a pattern, what is four or five? Believe it or not, this same calendar shape can be found inside every one of the last five years – even 2018 when yields were more distorted as they neared their Reflation #3 peak. That year, the same sort of mid-year downward drift reaching its floor by August 20, 2018.

And the year before, during globally synchronized growth’s reported arrival, UST rates were, for the most part, moving lower (curve flattening) as the market kept rejecting the idea that there was some legitimately inflationary recovery taking shape. The low in yields for 2017? September 5 (OK, so not August but more than close enough). 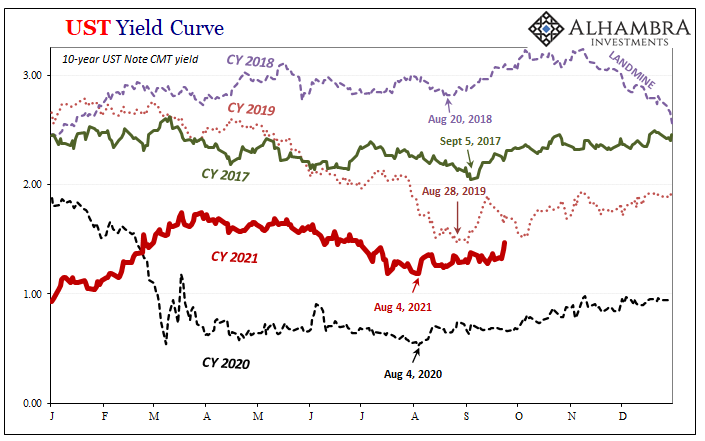 Even 2015 and 2016 were pretty close in matching this seasonality; during the latter, yields bottomed out early July and then went up (a lot) later in the Autumn. The year before, 2015, as Euro$ #3 “matured”, again a mid-year low on August 24 (following CNY’s big theatrics) which had been the same day as the eurodollar shortage striking Wall Street equities (flash crash).

While there were a couple days later on in 2015 when the 10-year yield dropped a few bps lower than August 24, still the same general trend overall.

And that trend seems to have become intriguingly normal, manifested as a regular uptick in yields especially during September and October and then lasting through the end of each year (2018 the obvious exception given the eruption of Euro$ #4’s landmine). Quite simple enough, LT yields go up after August.

Given this clear regularity, could any of these annual BOND ROUTs!!!! be considered reflationary?

Getting back to the original question, there’s quite a lot of evidence for something(s) other than Governor Waller’s melodramatic CNBC interview – or even the taper announcement and dots this week – which seems more likely to account for the bond market’s longer end behavior over the past five weeks. And this would also encompass the “big” selloff yesterday and today.

These last two days, then, have not been some unusual, tantrum-y eruption (look above at how far yields jumped in early September 2019 even as recession moved into the global forefront). Quite to the contrary, what’s happened so far over the past two months is entirely consistent with what seems to happen every year. Taper doesn’t.

This could even mean I’m actually off-the-hook, my britches still fashioned tightly right where they need to be. The Fed’s people will continue trying to provoke a bond tantrum because of their need for the public to believe taper is in charge of interest rates, yet right at this moment there’s only evidence that bonds are just doing what they normally do without regard for dots and QE’s.

This only raises the question, of course, what the hell must be going on during the month of August? Sorry for the cliffhanger, but that I’ll save for another day. Feel free, however, to tweet or comment your theories and hopefully during next week’s podcast Emil Kalinowski and I will be able to discuss them. 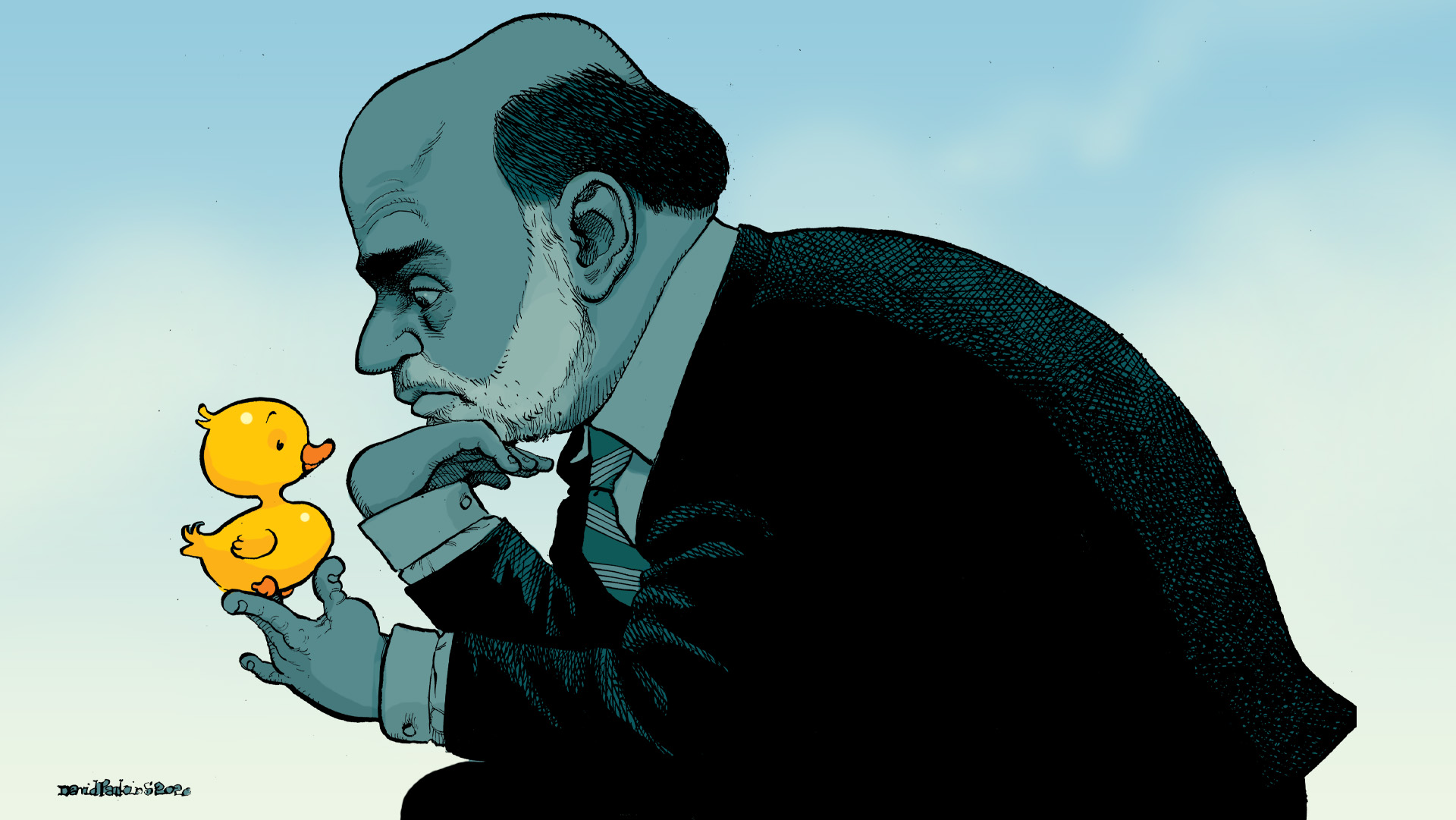