Someone once said that the stock market is always climbing a wall of worry. Maybe that had been true in some long-ago day, but whether or not it might nowadays is beside the point. The nugget of truth which makes the prosaism memorable is the wall rather than the climber.

There’s always something going on somewhere to get worked up over. And it matters to far more than financial actors, the entire global economy must surmount what can seem like an unending series of events each one at certain times described as the most wicked and befouling disaster humanity has ever confronted.

Such hyperbole, however, is applied only selectively to those times when the economy can’t seem to overcome these things. When the system is humming along, or even just barely reflating, the regular interjection of geopolitics is left in the background as nothing more than interesting noise.

Once downturn-ed, suddenly then every small event is the biggest thing ever.

How else are we supposed to explain “unexpected” economic weakness that the mainstream constantly assures us isn’t legit weakness?

Right now, for instance, Jay Powell says the US economy is in terrific shape, therefore it has to be Russia/Ukraine. After all, for being in an inarguably strong position, the biggest, most sophisticated markets in human history (with an actually enviable track record of making predictions and factoring reality) are quite vocal with the arguing.

Before Russia, it was omicron. Remember omicron? The reason it barely recalls now is it wasn’t the disaster many said it would be. And yet, here we are further along that same path toward inversion, downturn, possibly worse.

These “somethings” aren’t ever really the issue merely the latest stab at an excuse. 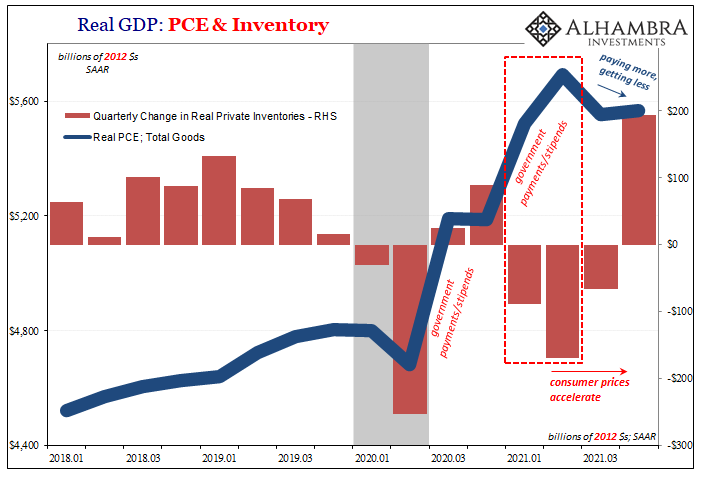 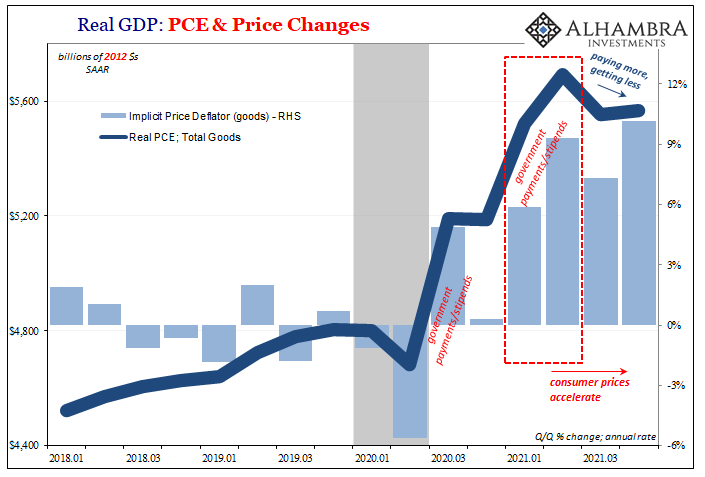 Last week, the ISM reported more sobering numbers for the manufacturing sector. The real issue over here is inventory, a historical flood of which risks taking down the lone outlier for the entire global system. Early last year, Uncle Sam juiced up demand for online shopping, then, bam, the entire supply chain was overburdened.

This was mistaken for a real, robust recovery particularly how it, like a classic supply shock case, showed up in the CPI.

We’re only since last October really starting to see by how much, and by how insane wholesalers and retailers had gone crazed with government mania. According to the ISM’s estimates for March 2022, the headline index on manufacturing fell to 57.1 from 58.6 in February.

Even if you don’t fall for the Russia blame, these numbers just don’t sound bad whatsoever. Near 60? That’s pretty good, seems like the US is weathering whatever alarm-of-the-day rather well. 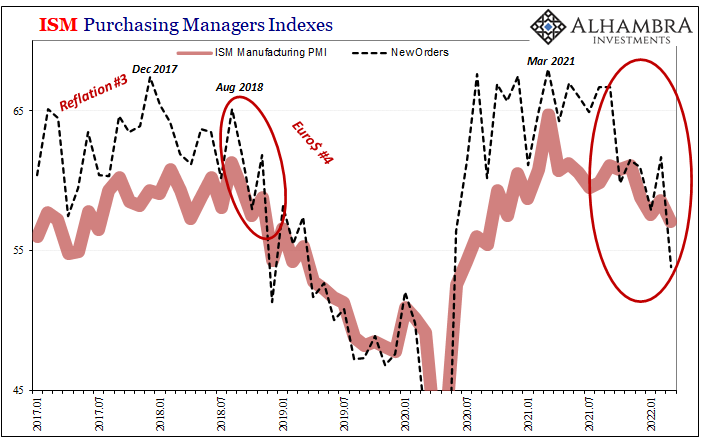 You take the ISM Manufacturing headline at 57.1 and then realize not only is it the lowest since September 2020, this continues a trend which month after month more and more resembles the wrong kind. The kind since October which falls into the same category as late 2018/early 2019. As if needs to be pointed out, that’s already not good and we’re only getting started.

While there had been any number of geopolitical apologies offered back then, too (ah 2018, when it was only Korean missiles about to ignite WWIII instead of actual war; when always-chaotic Italian politics could allegedly be the cause of major global market upset), none of them were ever able to adequately account for what became a globally synchronized downturn.

Here we are again in that same boat if with different geopolitics along for the ride.

Where it begins to look more 2019 than 2018 is, for ISM’s Manufacturing, the all-important New Orders category (above). Lost in the shuffle of last Friday’s March payroll report was a rather sharp drop in this component, falling to 53.8 from 61.7.

Again, 53.8, OK, big decline but still comfortably above 50. Yet, that’s the worst since May 2020, looking more like what was going on at that woeful time rather than inflationary hot with each noisy monthly release. 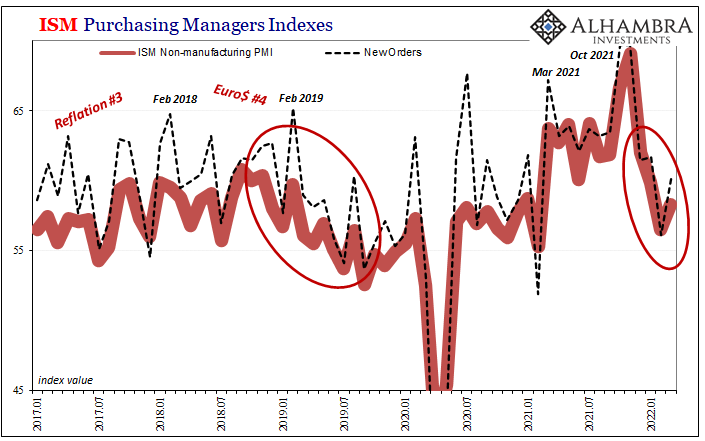 Should anyone then flip over to services, the ISM today gives no comfort there, either. Typically, post-2008 world, the services sector had held up several times better in the face of what repeatedly became sharp “manufacturing recessions” one after another. In the post-2020 environment, as I stated above, manufacturing has been far and away the star with services left almost all the way out of it.

Could the latter restore its own then the whole economy’s glory? That’s been offered by many as the next attempted explanation for what’s shaping up over in manufacturing (of course goods production is slowing, people are just normalizing, buying a few fewer goods after getting back out of the house again!) If this was the case, the ISM certainly doesn’t show it.

On the contrary, while the numbers all rebounded in March from February lows, that they were so low in February to begin with and didn’t come back much in March hints at other problems beside omicron, Russia, or the lack of lockdowns.

Once more, these sound pretty good if not borderline terrific. Yet, they are verging in on Summer 2019 comparisons. When the services sector is supposedly coming back up to save us from manufacturing slowdowns, these estimates are just around the same range as when, August 2019, yes, the 2s10s yield curve last inverted. 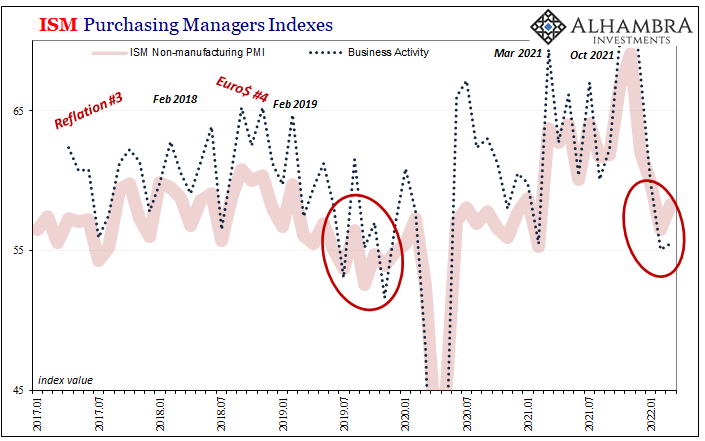 That’s not all. Much of the seeming “terrificness” of the headline (either one) is due to factors and components beyond output and ordering. Prices have skewed the numbers as have dispersion surveys for things like backlogs.

Judging by activity alone, in the ISM’s Non-manufacturing survey (above), services, sentiment surrounding output slightly worse than Summer 2019, edging now into the territory of later 2019 when much of the rest of the world economy had already begun to regularly (pre-COVID) feature negative GDP numbers.

Setting aside recession or any worries over severity, 55.5 for Business Activity (following a 55.1) is just no good at all regardless of how it may at first sound.

Is it the wall of worry? No. The same wall was in place last year just like it had been around in 2017 or 2014. The specific geopolitics change all the time because they happen all the time, ultimately what’s really left is the inevitable downside slide.

How far or fast it goes, well, that’s a matter for curve. 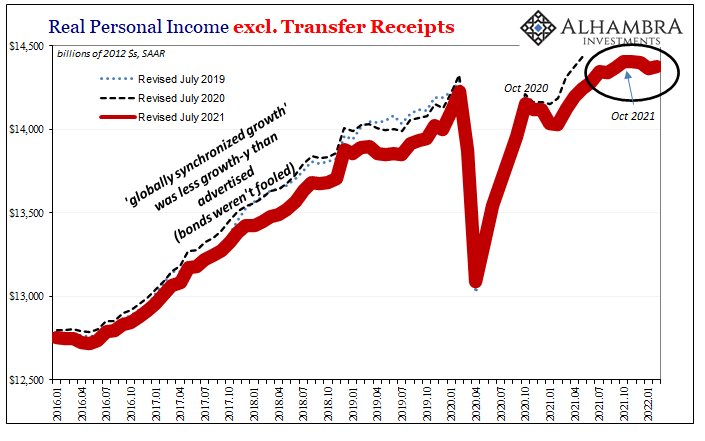 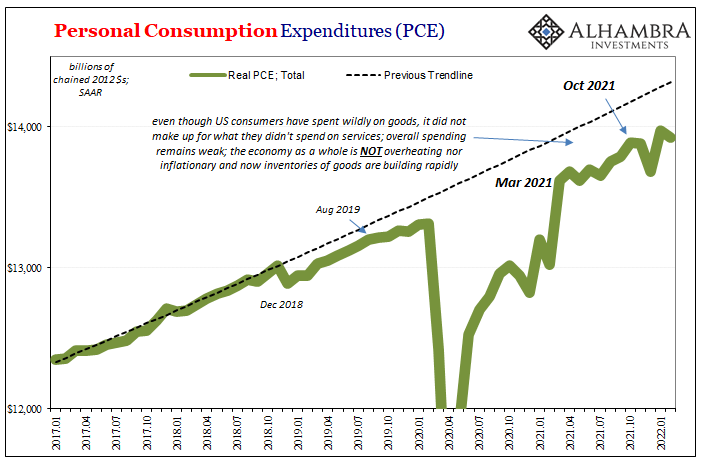 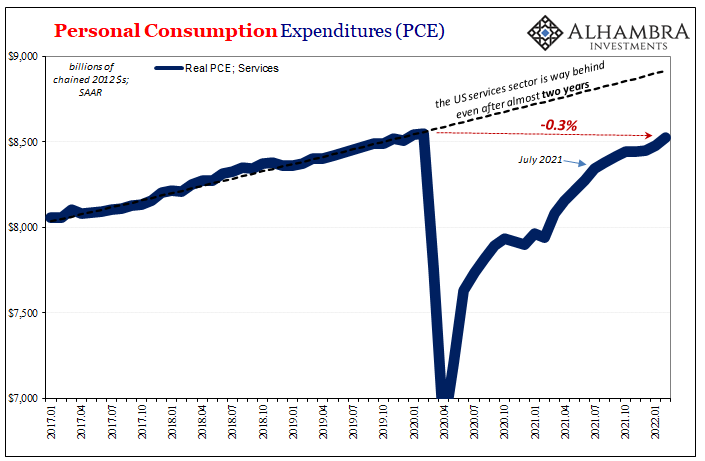