For one thing, that whole Bretton Woods 3 thing is really off to an interesting start. And by interesting, I mean predictably backward. According to its loud and leading proponent, China’s yuan was supposed to be ascending while the dollar sank, its first step toward what many still claim will end up in some biblical-like abyss. Instead, CNY is doing the plummeting and at a speed reminiscent of August 2015.

That month did not, obviously, lead to a vast rearrangement of the global reserve currency system. On the contrary, what happened then (and after) was yet another reminder – the third devastating one since August 2007 – of the eurodollar’s unfortunate supremacy (the same reason why there is no such thing as a petrodollar). 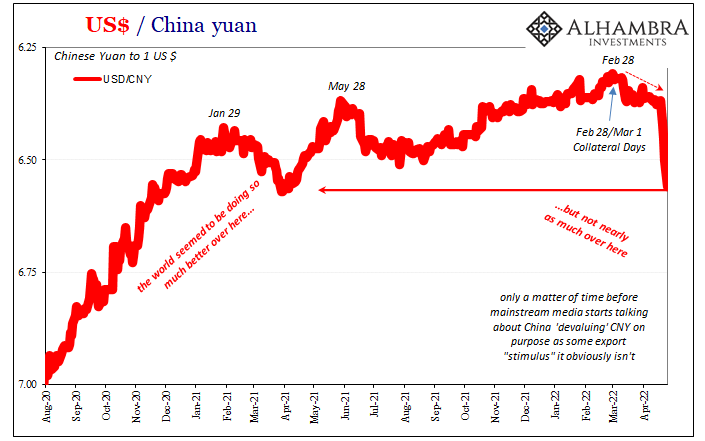 A commodity based Bretton Woods 3. We're supposed to believe this is serious.

To see why, @EmilKalinowski and I start w/a story from Aug '37 when bankers told Fed-sters to shove their "liquidity" since the system, the world wanted Treasuries.https://t.co/TC0zwLQWUm

Understandable why people think the gold-based Bretton Woods was almost immediately replaced by oil-based "petrodollar" if only because hardly anyone, then or now, knew it was all Euro$ the whole time.

Put another way, the eurodollar system was demanding a higher premium (paid largely to Tokyo) to roll over China’s massive dollar short. The Communists, however, often stand in the way of these things, either through clandestine interventions (off-balance sheet “contingent liabilities” in addition to “selling USTs” therefore more directly supplying funding the market will not) or via the exchange system itself.

The Chinese PBOC sets a daily trading band for CNY against the dollar, fooling everyone including its own policies along with the whole uncritical Western media which continues to report the central bank’s unchallenged omniscience as if a fact.

Untrue. What went on in August 2015 was merely the latest and most serious development from a string of escalating warnings that began more than a year and a half prior – back to the beginnings of 2014.

By March of that year, “out of nowhere”, according to the same Western media, the PBOC had suddenly widened the daily yuan trading band. No one could make sense of this otherwise.

As I wrote in March 2014, it was already a serious dollar problem forcing a policy response.


What all this data shows, as opposed to conjecture about the supernatural powers of central banks, is that yuan’s devaluation may be directly tied to dollar shortages. In fact, as I argue here, it is far more plausible that a dollar shortage (showing up as a rising dollar, or depreciating yuan) is forcing the PBOC to allow a wider band in order that Chinese banks can more “aggressively” obtain dollars they desperately need. Worse than that, the PBOC itself cannot meet that need with its own “reserve” actions without further upsetting the entire fragile system. 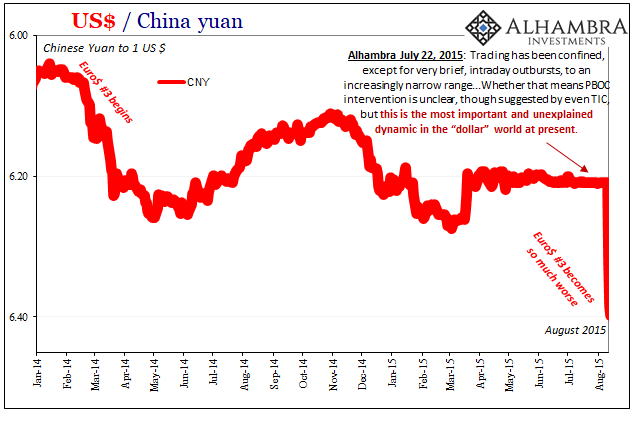 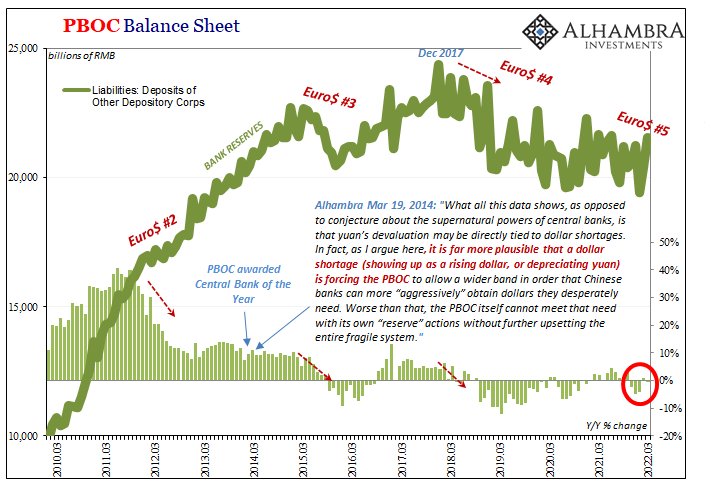 This is the part left out of incomplete mainstream reviews of those particular outcomes. What everyone today still believes is that China was deliberately attempting to “devalue” its currency in order to stimulate its faltering economy. Mainstream Economics, that deviously corrupt enterprise of pure monetary and economic illiteracy, couldn’t otherwise attempt an explanation for the manner of these events.

You would already have known this was untrue by so much effort being exerted from China trying hard to do the opposite – from mid-March until August 10, 2015, desperately by hook and by crook throwing everything at the problem so as to keep CNY from falling.

Devaluation it wasn’t. Quite the opposite, actually.

The “dollar” shortage only got worse. In that respect, these actions probably, likely contributed to the deterioration. I wrote on August 20: “…like a coiled spring, it could only remain in that state [pegged] so long as either the internal strain was manageable or the external pull of the “dollar” did not extend too far in time or depth.” By early August, the spring had been compressed too long and too much.

So, what was “it?” Here’s how I described it just three days after CNY’s “unexpected” and stunning collapse:

So if the PBOC was no longer able to supply sufficiently as pressure exceeded some grand threshold, assuming that is what kept the yuan suppressed those five months, they had only two choices at that point – let the fix drop significantly so that China’s banks could find their “dollars” at whatever price or face illiquidity to the point of default, “dollar” insolvency and all the rest of the nastiest consequences.

As eurodollars became harder and harder to rollover from 2014 into 2015, and not just for Chinese banks urgently seeking rollovers, everyone synthetically short them around the world, that had meant eurodollar suppliers (collateral or cash) demanded a higher premium to do so. In the simplest terms, China would have to pay more yuan to keep up access to the necessary supply of the world’s actual reserve currency.

It all reached a critical state and then blew up. As I wrote back then, the PBOC quite understandably “let the fix drop significantly so that China’s banks could find their ‘dollars’ at whatever price” because the backlash, the eurodollar tightening had become too fierce and deliberate to keep the peg any longer.

“Whatever price” rather than some intentional beggar-thy-neighbor stimulus ended up being China’s 2015 “devaluation.” One that didn’t stop there, either, the entire global economy soon engulfed in recession and worse (the US barely made it by just avoiding a technical contraction, serious enough that even Janet Yellen’s FOMC immediately stopped hiking rates). 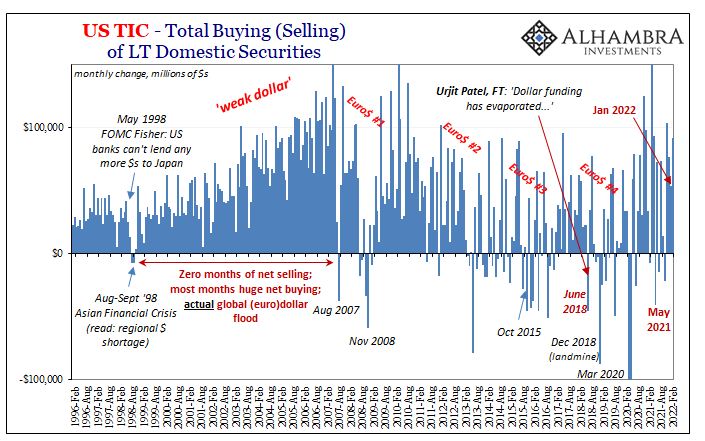 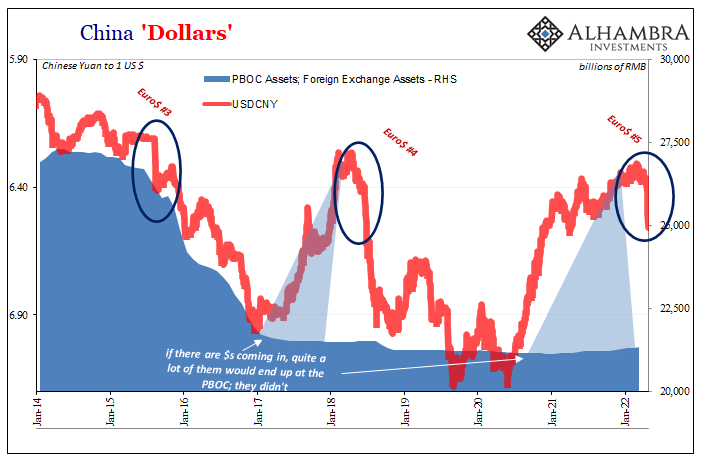 What's going on in Shanghai has nothing to do w/the coronavirus. Pure demonstration of political authoritiy. https://t.co/cwDaJUNR3k

Xi's goal isn't COVID-zero, it is quite clearly DISSENT-zero. https://t.co/Tw3CMCrcSz

With China’s currency in another “unexpected” freefall – also like April/May 2018, too; remember Urjit Patel’s description of those particular months – you should expect the mainstream to fill back up with all-is-well articles vaguely yet confidently attributing CNY’s fate to sagacious Communist technocrats who are smartly “devaluing” their currency to offset some potentially negative effects of Xi Jinping’s wise COVID-zero policies.

This ain’t about the coronavirus nor is the yuan being devalued. At least not on purpose or on its own.

In fact, it just won’t quite feel like a full Euro$ #5 until the “devaluation” stories start to trickle out, which we all know they will. That was the case in 2014-16, again in 2018-19, and it will undoubtedly happen once more now that the latest global dollar shortage has progressed to this unwelcome threshold. Since Economics is so utterly awful at economics, the public is left in the dark about what really happens each and every time.

Thus, something like Bretton Woods 3 will be taken seriously when it isn’t serious. The eurodollar, however, already is. Again.