The Everything Data’s (Z1) Verdict: Not Inflation, Only More Of The Same

The Everything Data’s (Z1) Verdict: Not Inflation, Only More Of The Same

The only thing that changed was the CPI. What distinguishes 2021-22 from the prior post-crisis period 2007-20 is merely the performance of whatever consumer price index. This latter has been called inflation, yet the data conclusively support the market verdict pricing how it never was.

What data? The “everything” data, the most comprehensive financial and monetary compendium yet available: The Financial Accounts of the United States, or Z1. While this doesn’t quite cover the entirety of shadow money out there, it’s as close as we might currently hope to get.

Some will say that QE6 represented a change, or that government interference particularly Uncle Sam’s “helicopters” were absolutely unprecedented. Whereas maybe QEs 1 through 5 hadn’t been enough “money printing”, along with a massive fed injection, the Fed’s number six was finally the charm hitting the unlucky magic number to unlock inflation.

People forget that George W. Bush’s administration was first into the helicopter business because the results were just that forgettable. Didn’t work. No inflation. Massive deflationary money, in fact, followed by that walloping deflationary economy (to this day).

Same with QE’s. As the numbering scheme already displays, the difference between numbers one and six being solely each’s size. Doing the same thing at different amounts doesn’t amount to a categorical change (so says the Japanese who know a thing or two about Einsteinian insanity).

The government at all levels has been intervening near constantly (all over the world) because of the one other regular feature of the post-crisis era: Euro$ Famine. 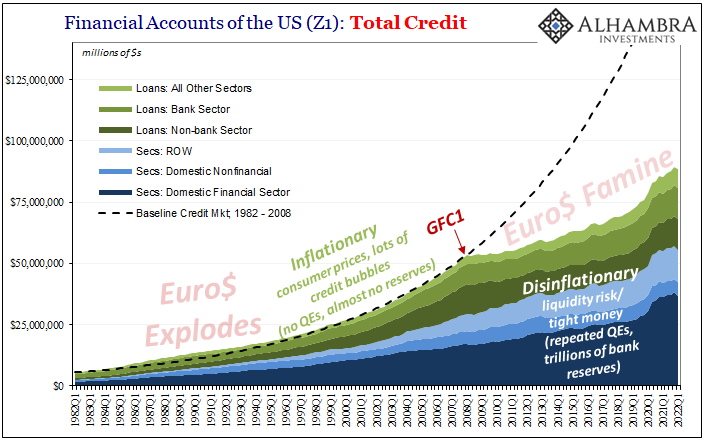 Not a single one of the Fed’s QEs nor any which way for Uncle Sam to have let loose, the results that matter first in banking before the economy have not budged or changed at any point over the almost decade and a half since August 9, 2007. All the post-crisis trends have remained, sadly, just as they were before COVID.

Even the federal government’s fast-tracked 2020 expansion was but a drop in the bucket (see: above).

The Federal Reserve’s comprehensive Z1 statistics were released a few weeks ago, and what they show is the same thing they always show. QE, “helicopters”, whatever, none of it makes a dent. There are only ever the insignificant and temporary deviations, the monetary background (high degree of liquidity risk) therefore background credit function unconditionally unaffected. 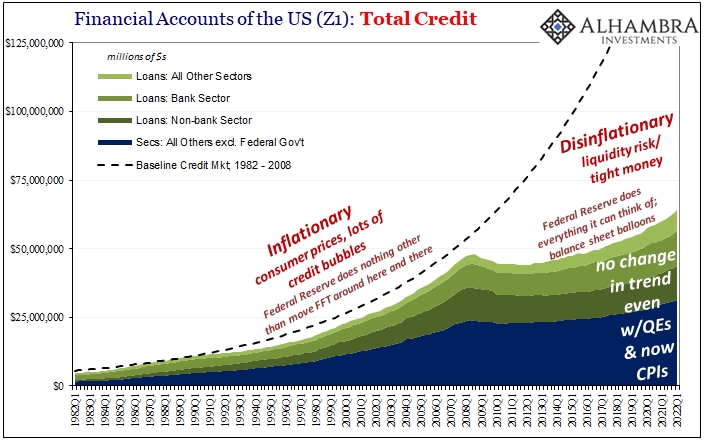 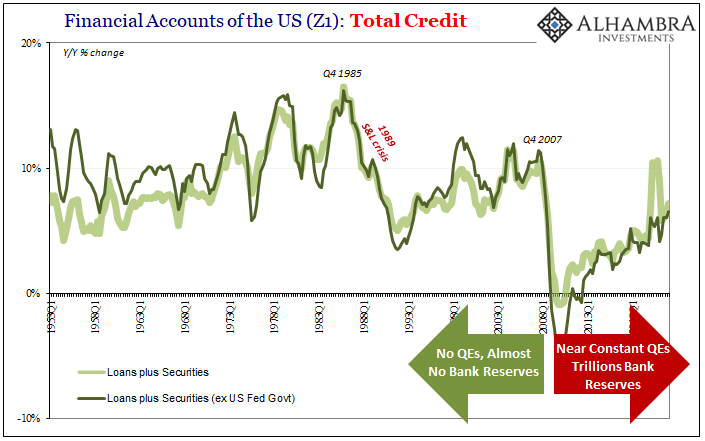 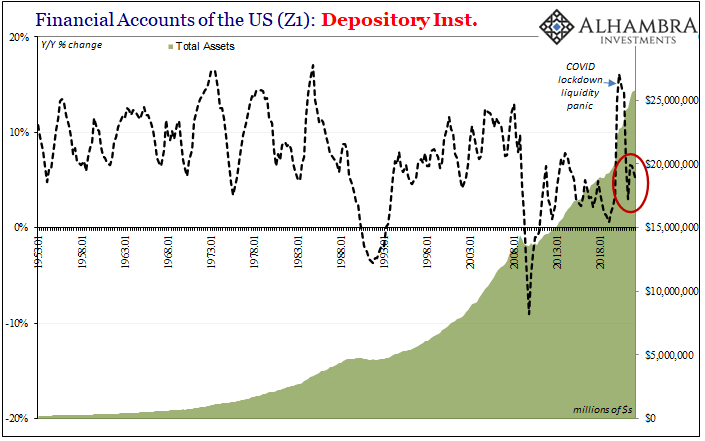 QEs were supposed to break the feedback loop, in theory.

In practice, anywhere and everywhere it has been tried, central banks ultimately fail to leave any distinct impression in any of the proposed channels (sentiment, portfolio effects, interest rates).

Bank reserves are not money, and the market prefers only safe and liquid, so that only leaves sentiment which, as you can plainly see, fairy tales about money printing don’t help, either. They are, in the end, actually harmful (see: Crytpo Winter). 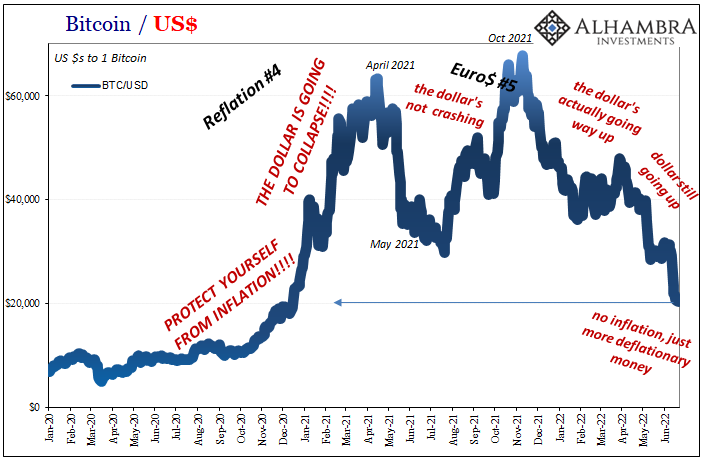 The distinct lack of positive effect is even more dramatic and widespread than it may already appear. Since the eurodollar system is the real global reserve money, its breakdown affects more than available US credit. In other words, as offshore banks fail to create money and credit for use inside the US, they also fail to do the same on the outside for the rest of the world (which isn’t measured).

This deflationary drag is even more pronounced outside than inside (we can see this in a number of ways that I won’t get into here). What the Z1 data shows is just how impaired credit creation has been in this Rest of World (ROW) segment. Banks, institutions, whatever from outside the country have been lending at a much-reduced pace consistently ever since 2007.

Since the US economy had become utterly dependent on this outside dollar credit/money, trouble offshore is trouble only beginning onshore. 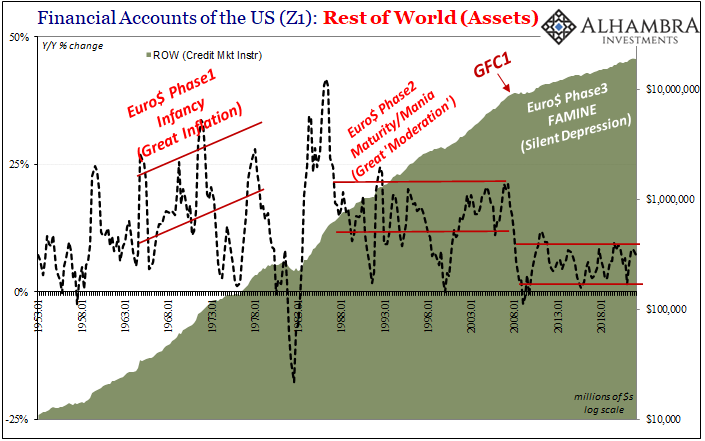 As we do when examining TIC, we reasonably infer how when there is so much less outside-to-inside activity (shown here by Z1) there is almost certainly even less than that outside-to-outside.

If ROW won’t lend into the US (shown in Z1), you can bet ROW is lending even less to other ROW (not shown anywhere).

This fact didn’t change with QE6, Uncle Sam nor any of the additional “tools” the Fed claims it thought up in the wake of March 2020 (FIMA, improved overseas dollar swaps, etc). Not even a single positive blip on the chart above, totally consistent from 2007 to today and that’s the whole problem.

Like all the QEs and government spending, the offshore-focused Euro$ Famine was equally consistent offshore, too.

This leaves only the one truly different result during that period: CPIs. Since this constant Euro$ Famine means lack of any actual monetary growth, consumer prices could only have been pushed higher for reasons that weren’t monetary, meaning it wasn’t inflation.

Had accelerating CPIs represented genuine inflation, we’d have seen it as clearly (somewhere, anywhere) in this global eurodollar credit/money data. 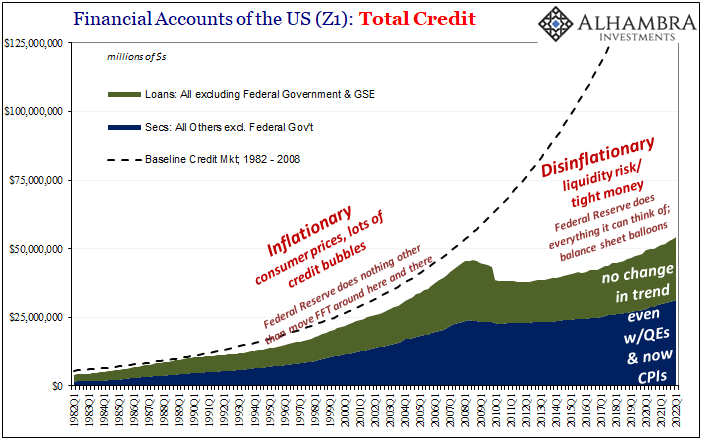 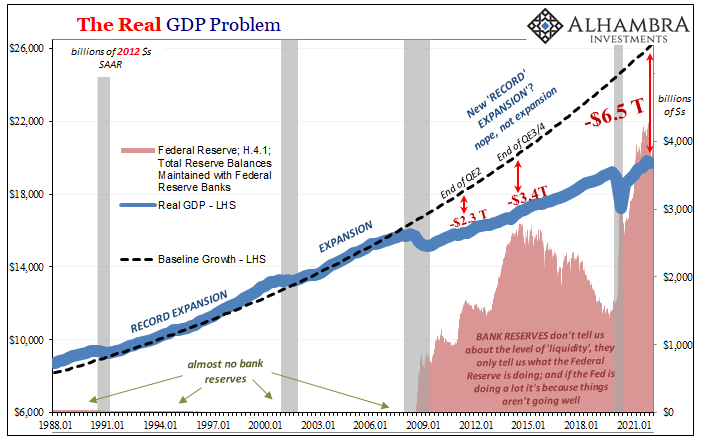 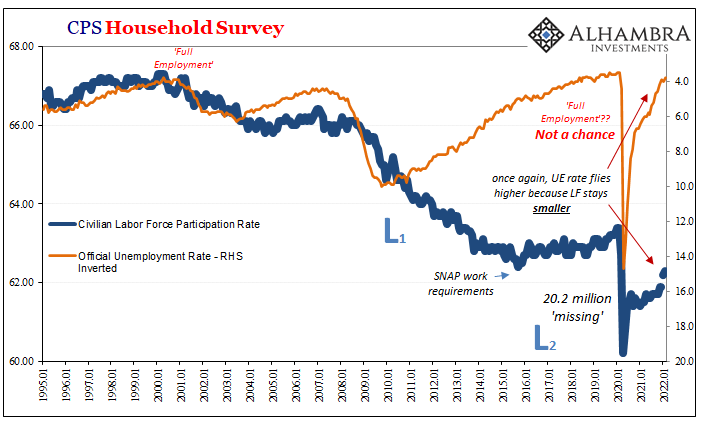 We’re left unsurprisingly with only a supply shock. The Z1 figures conclusively eliminate “too much money” that so many people claimed and came to believe, including all those poor souls who poured their savings into “stores of value” digitals which weren’t needed to be stores since the system was never in danger of dollar crashing.

It all ties together, from market prices and what we’ve known and suspected all along in real-time, corroborated decisively by the most comprehensive (therefore useful) data source available to anyone.

What this ultimately means is, of course, Euro$ #5 because that’s not any different, either. This Euro$ Famine world is a global economy susceptible to these kinds of repeated setbacks, the unbroken vicious cycle lack of liquidity which keeps a lid on more than just money and credit, restrained growth and potential therefore no chance at real recovery.

All of it ensures any non-money, non-economic supply shock effects will be, dare I write, transitory.

NOTE BELOW: THE SAME EURODOLLAR AS SEEN FROM DIFFERENT ANGLES, INCLUDING 1997-98 ASIAN FINANCIAL CRISIS AND AFTERMATH 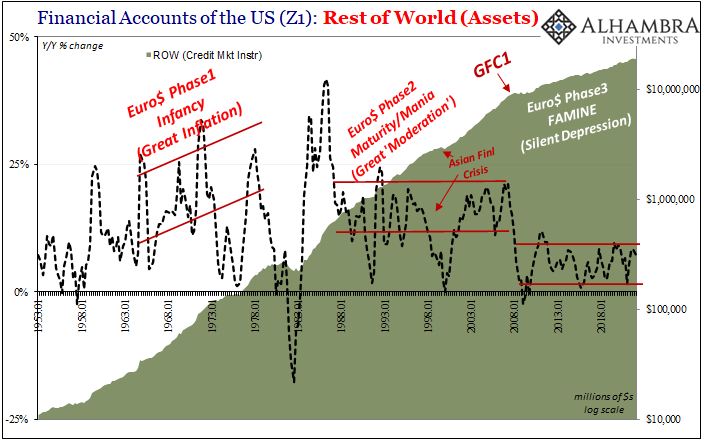 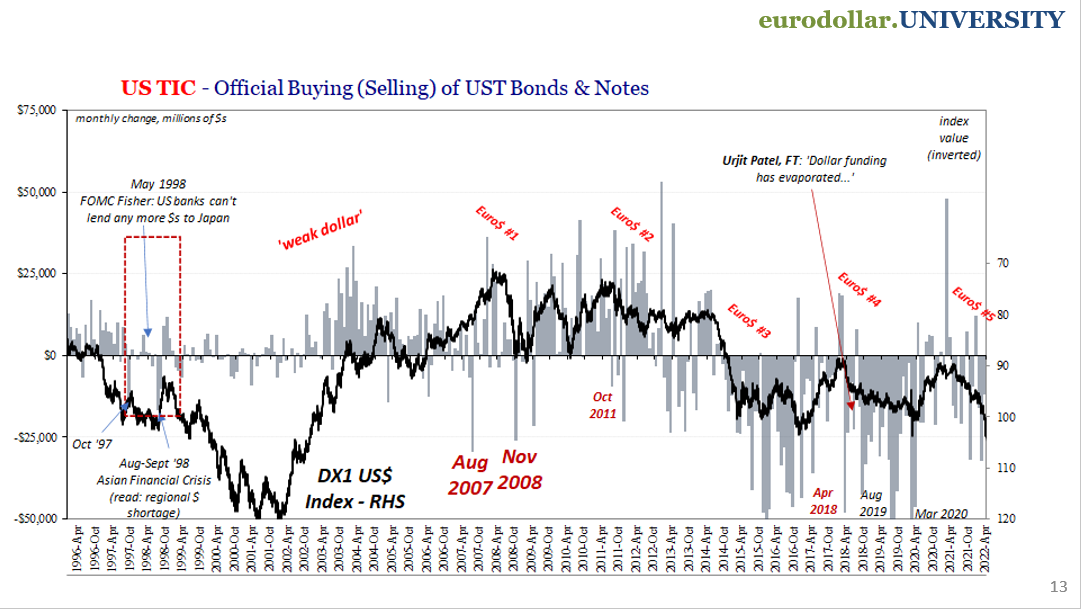