As early as September 11, the changing trend had already been spotted. In Indian finance, the epicenter of taper turmoil since May, the inflows of “money” were distinctly different than the combat for funding experienced over the previous months.

“Forex dealers said the turnaround in the rupee was mostly led by dollar inflows from foreign institutional investors (FIIs) in the local stock market. After selling $946.53 million in the equity market in August, FIIs have invested $765.29 million in the first 10 days of September, according to figures released by the Securities and Exchange Board of India.”

I previously circled September 4 (or 5, depending on the particular market) as a potential inflection in funding markets, led by eurdollar futures. I cannot yet discern why that date stood out as the day to change market perceptions that were so certain of upcoming taper. The August jobs report was not released until September 6, but it is possible that markets were reacting to anecdotal expectations for weakening economic data points.

On the other hand, it was on September 4 that Mohamed El-Erian, bond king PIMCO’s chief, told a TV audience that he fully expected taper to begin at the September FOMC meeting.

“The longer you stay unconventional, the greater the risk of policy ineffectiveness.”

There is little doubt, now, that the second part of his statement rings true in light of actual economic conditions that aren’t quite living up to earlier expectations. Yet, the Fed chose to taper and the global funding markets “knew” two weeks before. 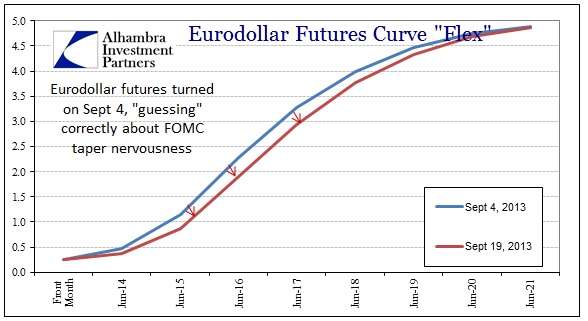 Perhaps the FOMC began to really listen to their primary dealers, calling off the academic exercise in talking markets up and down. There are all sorts of private conversations going on between policymakers and banks all the time, particularly since the Federal Reserve System was designed 100 years ago to be responsive to banking needs first and foremost.

Whatever it was, the dollar markets were anticipating credit market carnage all throughout August, but then abruptly reversed. I don’t think it all coincidental that the Fed referenced “tightening” in its statement yesterday as a “new” concern. I also believe that more than a few members of the FOMC are extremely concerned about the direction of inflation, but not in the manner the media portrays.

In textbook economics, tightening plus declining inflation momentum (official measures) is the worst case. Nothing else comes close, not even asset bubbles and repo dysfunction. Whatever it was, it started September 4 and will last until the next round of taper chatter is introduced into this ebb and flow.