In 1964, Milton Friedman suggested the economy behaved like a string set along a piece of wood on an upward slope. The string, hugging the underside of the wood, represented the economy moving along the track of potential (the piece of wood), rising with productivity (the upward slope, or trend). Occasionally, an external shock would “pluck” the string downward, representing recession. Much like a string plucked, the economy in this model would snap back to potential in a symmetrical move. Thus, the shape of any recovery is more or less determined by the intensity of that downward pluck. 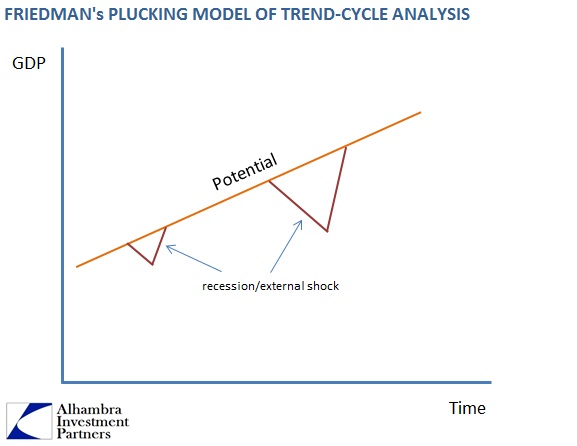 Again, the basic assumption was symmetry, that infamous “V-shaped” pattern. By 1993, Friedman had amassed enough data to that point to “confirm” this model of economic behavior. 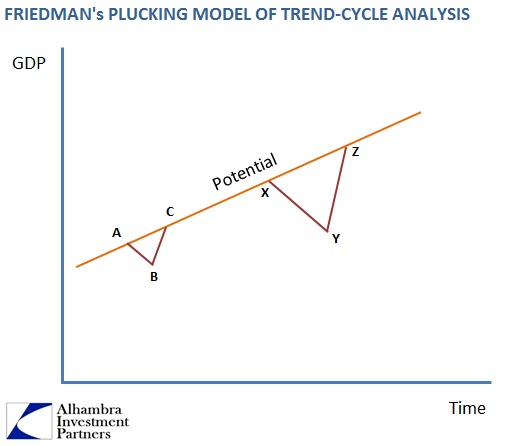 For instance, once we measure the variability created from the external shock of recession from Point A to Point B in the illustration above, we can, with a good estimate of the overall trend in potential growth, predict the movement from Point B to Point C. That increases the overall predictive capacity of economic statistics, and thus makes them, in theory, more accurate. If a recession is much larger, as in from Point X to Point Y, then we would expect after a trough a similar or symmetrical move like that from Point Y to Point Z.

So modern economic accounts measure expected variance arising from both the trend in potential and the cyclical changes, anticipating them in accordance with Friedman’s plucking model.

The BLS, for example, incorporates this process into its adjustments, establishing expectations for the behavior of data, or “signal”, variability.

These statistical models are supposed to be benchmark and validity tested in an attempt to identify any changes in variance far outside modeled predictions. However, nothing I have seen in the literature suggests a comfort level with experiences that do not follow historical expectations (as you would expect, these kinds of statistics are totally dependent on the past data series). 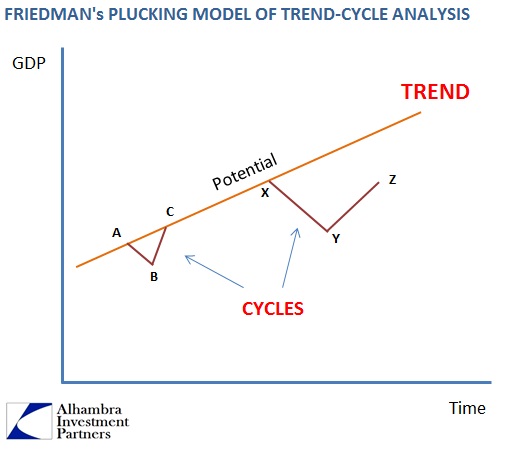 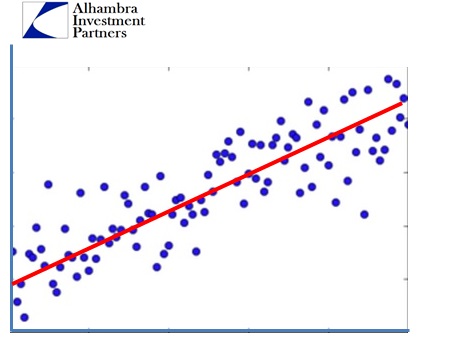 These estimates of variation in the data adjustments are all regression models in one fomr or another. So the regressive model might look something like what’s illustrated above (this is just a hypothetical, generic scatterplot and not something actually used by the BLS). The historical context of the trend cycle data tells the regression models to expect certain outcomes, largely conforming to the plucking model.

If, however, the actual data deviates from historical norms, it might look something like this (again, just a generic illustration): 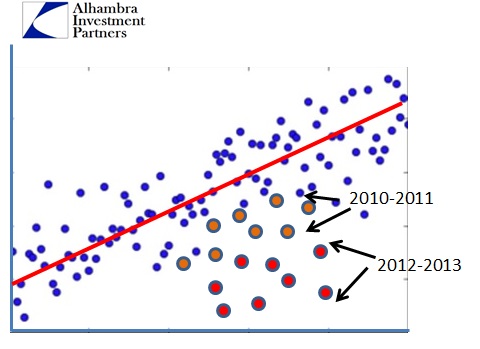 If there were no changes in the regression model’s basic conceptions, the regressed adjustments would be skewing upward. Even if the models incorporated new incoming data, which an ARIMA model should given that it integrates a moving average (the MA), it still would skew upward given that the data would remain highly biased by previous history (the new incoming data would only be a small part of the data set). The BLS is not going to simply throw out all its regression models, based on the entirety of the post-WWII era, because the period from 2010-today is “off.”

I have little doubt that was what Keith Hall, former head of the BLS, was talking about in July. That may or may not be what Ben Bernanke was alluding to when he indicated that he too saw an upward skew in the employment data.

With the recovery action in 2010-11 undershooting all expectations (never a V-shape), then an unmistakable slowdown beginning in 2012, that would lead regression models further and further away from “reality.” 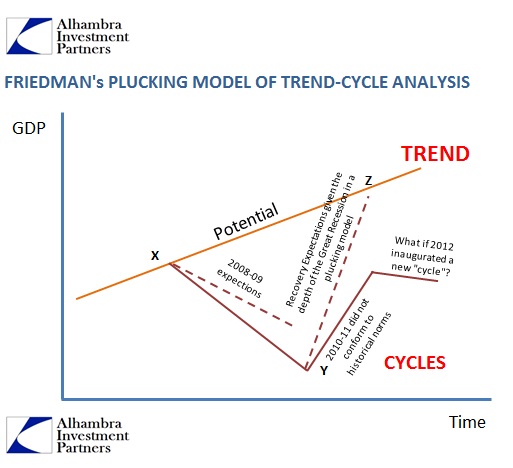 In fact, I think that is what you see in the comparisons between various labor market surveys. 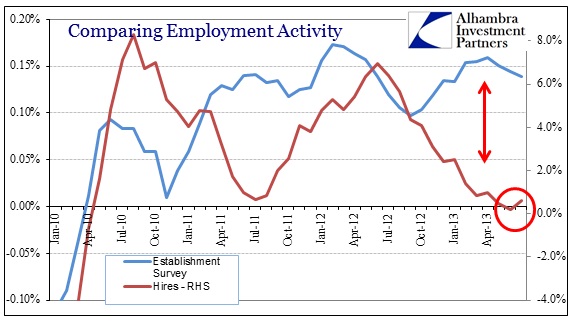 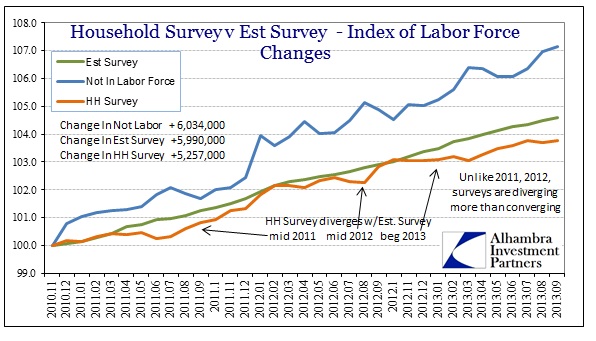 The trajectory of the Establishment Survey, the one most “smoothed” and adjusted, has been almost entirely uniform since 2010 despite all evidence that there was at least a slowdown in 2012.

Therefore, as disappointing as the September payroll report was, it may have been, in actuality, much worse. By applying techniques gleaned from the recent historical past (post WWII), the BLS and every other statistical agency is using expectations of historical patterning to frame its representation of current conditions. The “seasonal” adjustments are far more than seasonality.

It is somewhat ironic, then, that Friedman used 1993 as his confirmation for this view of the economy. It was the recovery after the 1990-91 recession that introduced the “jobless” feature, in contrast to all previous post-war cycles. That continued to grow after the 2001 recession, and again after the Great Recession. The economy does not appear to perform, in the age of activist central banking, according to the plucking model, at least on the recovery side. However, nobody has clued the BLS, BEA and Census Bureau in on that possibility, since they still expect the 2009-13 “recovery” to look like 1983-85 or 1961-65.

It is entirely possible that such economic symmetry may have “died” with debt saturation in the interest rate targeting age. I would argue that the data, such as below, shows conclusively as such. 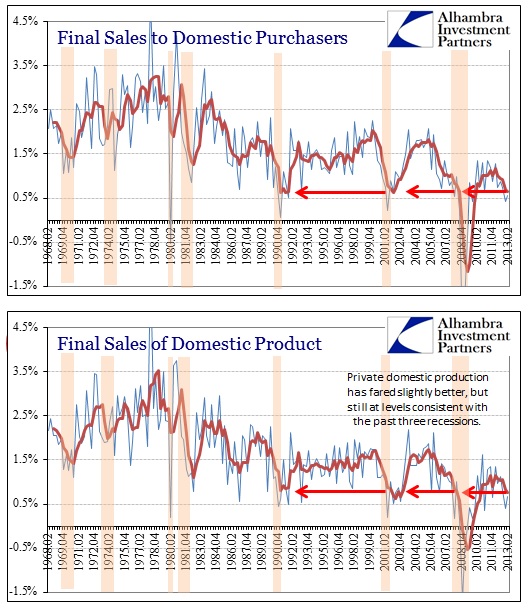