Establishment Survey Totally Off The Rails

Establishment Survey Totally Off The Rails

The only strength in that survey is the straight line with which it follows, and that tells us nothing about the state of employment in the United States. 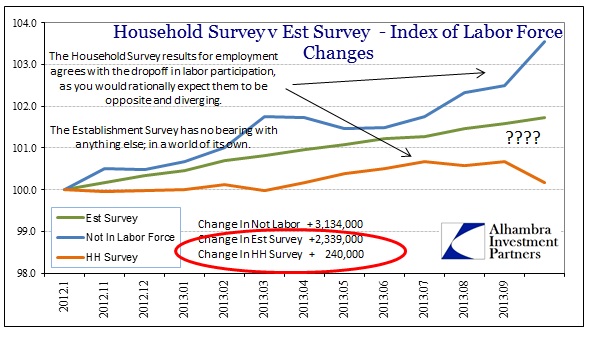 The knock on the Household Survey is that it is volatile, and thus economists are wary of its precision. And that surely was the case with October – the Establishment Survey showed +212k private payroll growth; the Household Survey -735k. To go along with those job losses, 932k people were left out of the official labor force.

But we are not talking about just one month’s worth of “volatility” clouding interpretations from the alternative measurement. Since October 2012, when labor market weakness began to creep in after the inventory-driven mini-resurgence in Q3 ’12, the difference between the two labor surveys is a mind-boggling 2.1 million jobs. That’s not volatility; that is an entirely different labor market.

And it’s not like this divergence has been constant and universal throughout the past five years. Up until last October, the two surveys showed more or less the same results – including a bit more volatility in the Household Survey to get there. 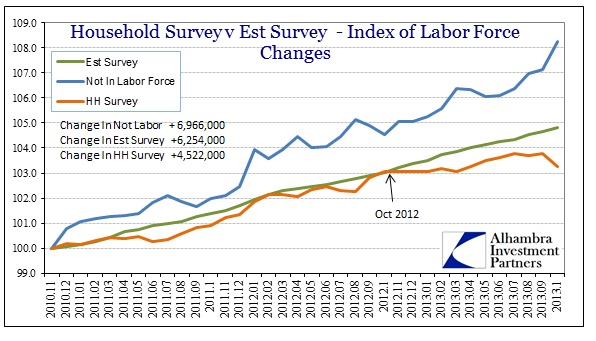 The divergence now, spanning more than a full year, is too great to simply ignore as random noise. It is significant in both the statistical meaning and for truly objective analysis. What the Household Survey shows is that there has been no job growth since last October, while the Establishment Survey demonstrates relatively weak job growth. The labor participation numbers echo the former far more than the latter, as does so many other economic accounts. The economy is not moving in 2013, which is the same as not growing (shrinking comes after revisions).

There is always the possibility that we are seeing something perfectly new in economic history. Typically when you see the labor force shrink by 815,000 in only 9 months, while at the same time the number outside the labor force swells (spikes, jumps) by an astounding 2.53 million, you don’t think recovery or even sluggish growth. No, those numbers are reserved for something else, a part of the economic “cycle” that usually shows little or negative job growth. 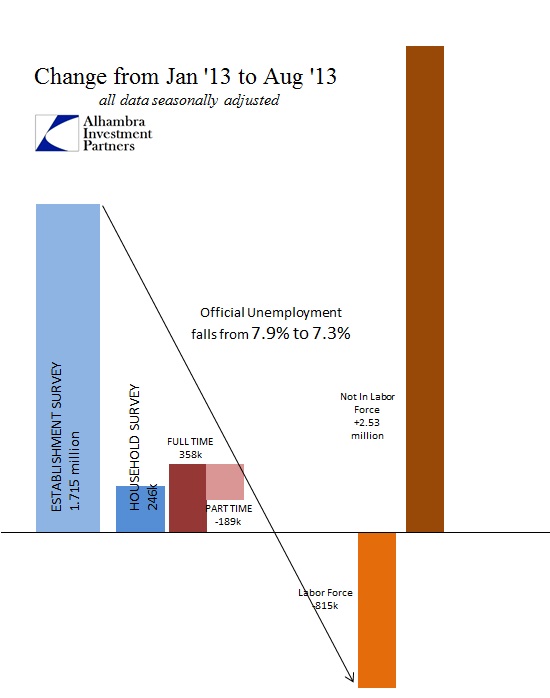