With the Federal Reserve’s taper summer having created “dollar” troubles throughout the known credit world, there is renewed interest in eurodollars and wholesale money. When the world previously took note in August 2007 (at least those that were paying attention) it was an introduction into modern banking. Gone are the days when banks took in currency (in the form of Federal Reserve Notes – really gone are the days when “reserves” consisted of actual money) and multiplied. Traditional banking was already being replaced in the 1980’s when the Basel rules essentially ended it as a marginal force for finance.

Even in 2007 in that rude awakening there has been confusion about what a eurodollar actually is. That was understandable since there has been much the same confusion since that market’s earliest days. Originally published in October 1969, Milton Friedman attempted an answer after noting the difficulty to which even sophisticated bankers were often confused, coming to the conclusion that eurodollars are figments of bank accounting. It was true then and it is true now – and the implications are not trivial.

There were two major evolutions in money and banking that seem to fall outside the orthodox narrative. The first was a shift of reserves and bank limitations from the liability side to the asset side. The second was the rise of interbank markets, ledger money, as a source of funding rather than required reserve balancing; replacing the old deposit/loan multiplier model.

The growth in the eurodollar market in the 1960’s was made possible by these evolutions. However, the full extent of that growth was tied to the fact that eurodollars rarely involve actual “dollars.” In other words, there are no reserves or stocks of currency, only changes in balance sheets. That made the wholesale market far more efficient, and, coupled with regulatory arbitrage, much more enticing for banks that will always seek to expand as fast as possible.

In Friedman’s 1969 essay, he illustrated the accounting convention that “created” eurodollars through a series of examples. 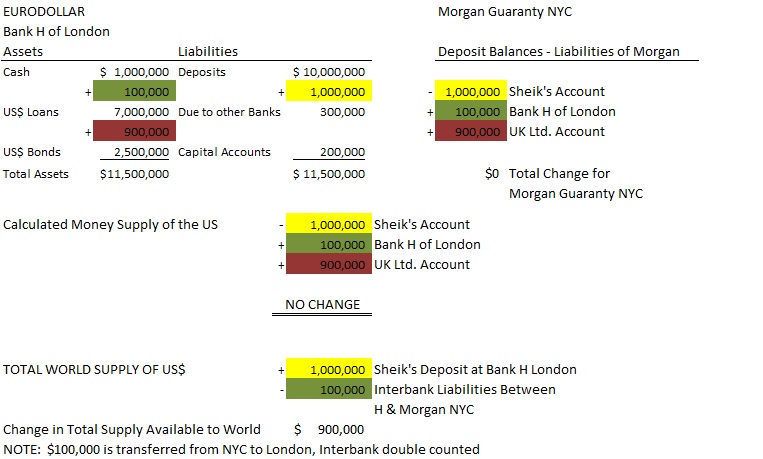 Friedman imagined a Sheik from an oil exporting nation wishing to gain a better interest rate on $1 million currently sitting in a New York bank (Friedman used Morgan Guaranty). Since Regulation Q (until 1980) limited the NYC bank’s ability to be competitive, there arose a need to establish subsidiaries in London or lose business. Instead of turning the Sheik away to some foreign bank, the NYC bank instead transferred the $1 million to their London subsidiary.

Since the transfer occurred via ledger changes in accounting systems, there was no actual change to the money supply in the United States – and certainly no transfer of actual FRN’s or currency stocks. However, total “dollars” supplied to the rest of the world, upon usage of those dollars in additional lending into eurodollar markets, grew by the old money multiplier. 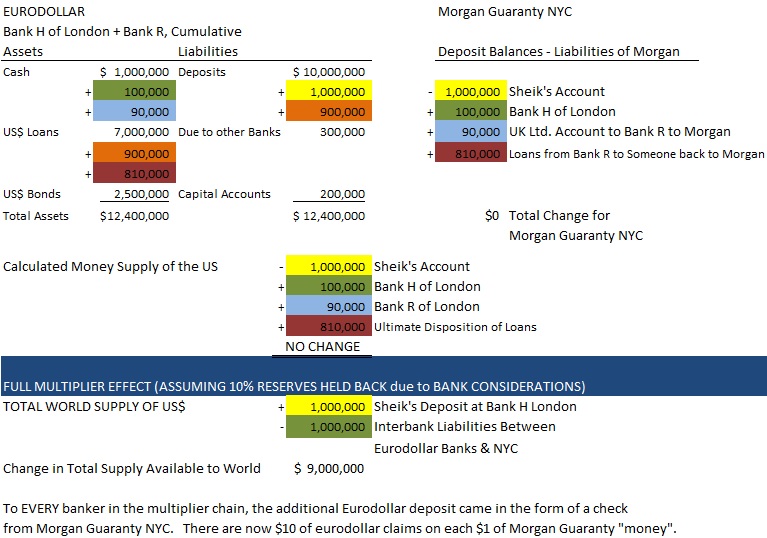 As long as eurodollars remain inside the eurodollar system, being used to fund loans and eurodollar deposit ledgers, the available supply of dollars to the world grows by some multiple without changing (directly) the supply of dollars inside the United States. But, more importantly, that means eurodollars are themselves derivative claims not on stocks of currency, but on accounting lines of American bank balance sheets. They are, to be cute, fractions of fractions.

As Friedman noted of the example above,

“This example perhaps makes it clear why bankers in the Euro-dollar market keep insisting that they do not ‘create’ dollars but only transfer them, and why they sincerely believe that all Euro-dollars come from the U.S. To each banker separately in the chain described, his additional Euro-dollar deposit came in the form of a check on Morgan Guaranty Trust Company of New York! How are the bankers to know that the $10,000,000 of checks on Morgan Guaranty all constitute repeated claims on the same initial $l,OOO,OOO of deposits? Appearances are deceiving. [emphasis in original]

That’s not to say there is no currency in eurodollar banks at all, but it is by and large a ledger system of bank balance sheet expansion. That is why the Fed needed dollar swaps beginning in December 2007. Foreign banks were using eurodollars without direct access to “dollars” in NYC. There had never been any difficulty in that arrangement prior, so it was never believed to be a weakness. 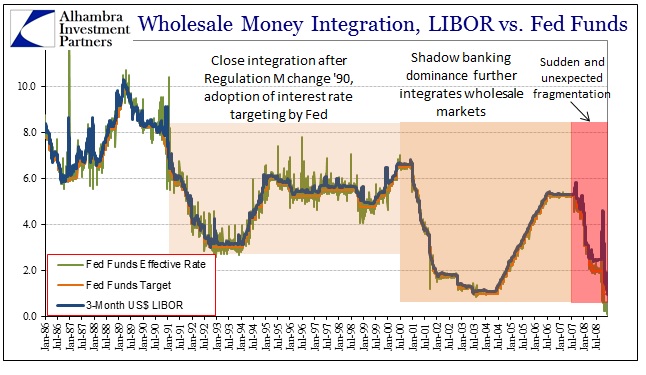 Starting August 2007, suddenly NYC dollar-lenders grew wary of counterparties in London, and thus removed the original fraction from access. Without any direct recourse to the Fed, the fragmentation of dollar markets grew until it became a panic. Despite conventional wisdom that still says otherwise, the Panic of 2008 was centered in London. But it was still a “dollar” problem. 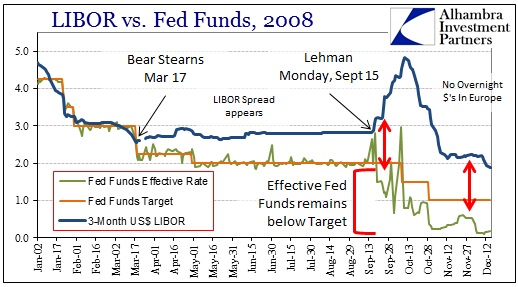 Fractions of fractions work somewhat well when their ultimate disposition is to grease the wheels of global trade. In fact, that was the original intent of the eurodollar market just past its infancy – not necessarily a playground for megabank speculation, but as a replacement for the Bretton Woods gold exchange standard. Some refer to it as the petrodollar standard, as Friedman’s example not coincidentally utilizes, but the idea of “petrodollars” leaves off this extremely vital nuance of eurodollars themselves.

I’ll go further into this and the evolution of eurodollars in another post. For now, funding markets for global dollars are set up by the accounting conventions of ledger money. No currency, no cash, just the bookkeeper’s pen. From there, possibilities, good and bad, are much greater and momentous than the simple (and wrong) notion of oil exporters receiving Federal Reserve Notes in trade exchange.