It is only one word, but it has been repeated so many times by FOMC members in the past year or so it has taken on the imprimatur of officialdom vernacular. Whenever speaking of bubbles, these policymakers inevitably include the word, “obvious.”

Long is the list of internal literature that purports to place bubbles in the same category with the Supreme Court’s definition of pornography – we know it only when we see it. In that respect, “obvious” is the perfect qualifier that situates even the brightest of the PhD’s in the same herd as the little guy investor. It would be hard to blame them in disaster if that were actually the case since “everyone” else missed it too.

According to St Louis Fed President James Bullard’s “obvious” bubble definition, there have been two “gigantic” bubbles in recent history. In his analysis, the first, dot-coms, ended “relatively benignly” while the second did not (I think that too is obvious). There is such a huge flaw in that perception because it childishly permits the bury-your-head-under-the-blanket strain of examination. If you don’t see the monster maybe it won’t see you.

There is no useful means by which you can plausibly separate the two bubbles, as one not only followed from another (intentionally, pace Krugman) they were in so many ways concurrent. You cannot assume otherwise because it is now “obvious.” That sets up a curious contradiction since they are obvious apparently only in hindsight. Janet Yellen certainly was not concurrently aware of their existence, holding no special favor or petition toward a solution at the time. Maybe obviousness needs to be itself obvious. 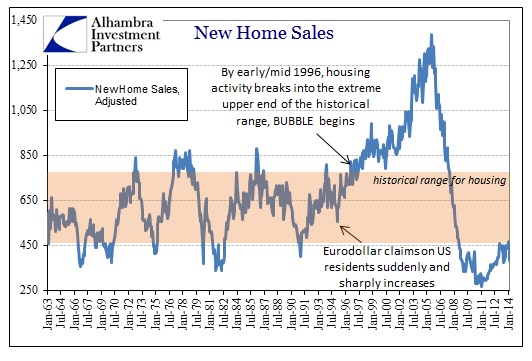 Tortured logic is all you end up with here. And it was apparent once more today in Yellen’s morning remarks.

For the equity market as a whole, the answer is valuations are at historically normal ranges. Long-term interest rates are low and that is one of the factors that feeds into equity market valuation. There are pockets where we could potentially see misvaluations, but overall those broad metrics don’t suggest that we are in obviously bubble territory. [emphasis added]

The first sentence in the quote above is intimately related to the last, though it is not obvious at first glance. Historical range now includes that obvious dot-com bubble which stretched valuations to extreme proportions. That means that anything even just short of the height of ridiculousness of 1999-2000 gains inclusion into the “historical range.” We can compare valuations, for example, between now and the late-1990’s and still maintain the vapid validity of that statement. In fact and increasingly that is the only time period that matches current conditions.

Taken a step further, the only way to become an obvious bubble is apparently to exceed the dot-coms by an obvious degree or order of magnitude. In 1999 and 2000, Greenspan was still a genius who crafted a “new normal” without a business cycle out of nothing but his charming briefcase. It can only be defined, Bullard admits, in hindsight, which is realistically the only place obvious can attain obviousness.

Bubbles are not just the perfect analogy to runaway asset inflation because of the similarity of inflating behavior on surface tension and the inevitability of the burst, but also because bubbles encapsulate. An asset bubble is one in which the greater proportion sees nothing but what they want to see.

To accept his [Bullard’s] premise is to discount mania. If bubbles were so obvious, then they would never occur except in the risk of not being the Greater Fool. But while some acknowledge that risk, most charge headlong into the craze with little or no reservation. Or, more precisely, it is the rationalizing of why risk is overstated, over-emphasized or just plain non-existent. It is the rationalizations that create and sustain bubbles, and their primary effect is to render the bubble un-obvious.

What we are about to discover is whether segmentation and containment applies. Small caps are the closest class to “obvious” that may exist among equities today (credit is another story, but about which nobody in the authoritative class wishes to speak; at all). It is certainly true that pieces of “markets” can be overvalued and leave undisturbed the wider market, but there should also be caution about whether factors leading to narrow overvaluation do not also apply more broadly. In today’s world where the price of risk is highly controlled, it would be obvious folly to discount such associations and interactions among all classes.

The “good” news is that we will know for sure, including Yellen and her FOMC conspirators, at some point once it all becomes perfectly clear in hindsight. What a way to craft scarily intrusive policy! 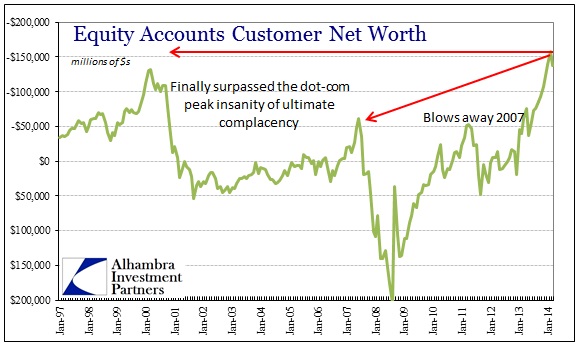 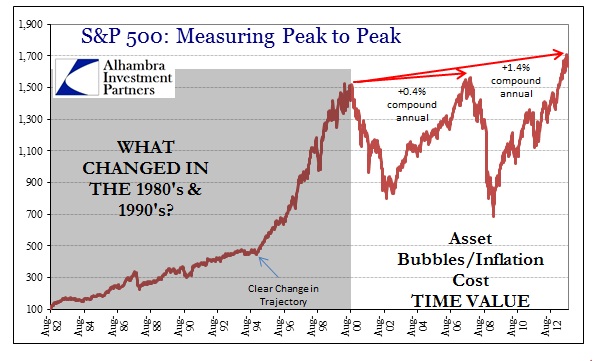 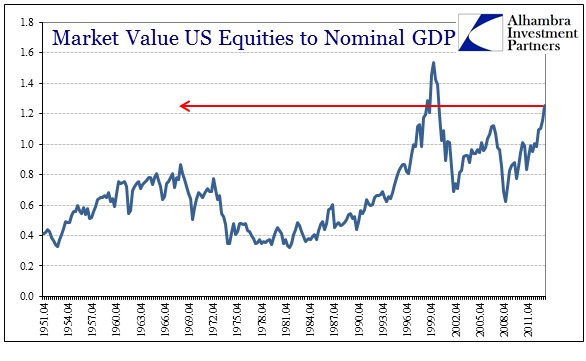