I normally do everything I can to avoid sentiment surveys, like the Chicago PMI (the Chicago Business Barometer to be specific), because they really are misleading without exact context. However, any large move like the one in July should bring at least some interest since outlier events are often the most informative. What may be important is not necessarily the huge collapse but the implications of that in how closely it resembles a chart I showed yesterday: 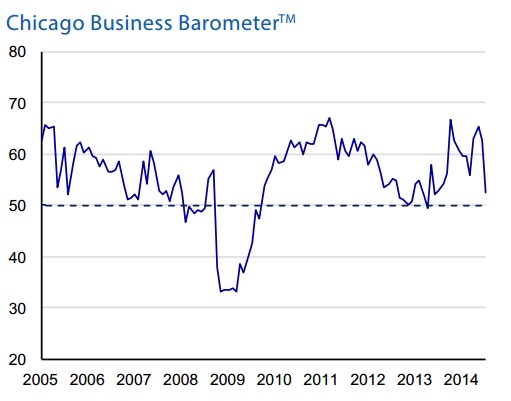 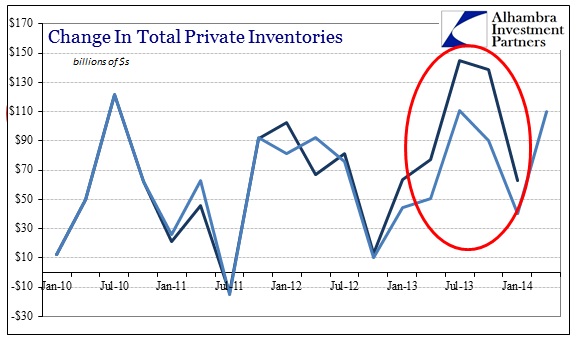 It’s not clear if the Chicago index is tracking inventories before or after the massive and unsettling revisions, but it doesn’t really matter since trends are what we are after. If there was an actual inventory buildup in 2014 (revised estimates), rather than the massive wave of 2013 (prior estimates), then such a steep decline might (and I stress might) indicate ultimate saturation. That would be all the more plausible if consumption and end demand of goods were less than desirable, and thus less than indicated by GDP (but not actual retail sales and other private figures of retailing), which weren’t exactly robust in historical context.

In other words, the possibility is raised that another inventory cycle, led by persistent optimism of end demand that never actually arrives, is closing in on its actual end. Given that the current mini-cycle dates back to the middle of 2013 (shown in both the GDP-inventory data and the Chicago PMI) that is nothing good for an economy, at least as pictured by GDP, that has been marginally attracted to inventory above all else.

To reiterate, this is a sentiment survey so I don’t place much emphasis on it. But it is intriguing to say the least. It certainly matches up with the growing deficiency in capital goods, so we will have to see if this is replicated broadly elsewhere.