‘American Customers Continue to be Cautious’; First Quarter No Longer Looking Like An Aberration

‘American Customers Continue to be Cautious’; First Quarter No Longer Looking Like An Aberration

With retail sales this week bringing an “unexpected” shock to those forecasting a robust economic rebound (outside of inventory, anyway) in the US, further confirmation has been offered pretty much everywhere else. WalMart’s quarterly report was as it has been since the end of 2012 with continuing slow erosion. US same store comparables were flat, which is something of an achievement considering that overall environment. Despite yearly proclamations of recovery, hard dollar figures continue to demonstrate otherwise.

In other words, the actual results of the companies that are closest to American consumers confirm the bleak picture provided by the government estimates of retail sales. Beyond WalMart, Macy’s reported a “shocking” miss on both Q2 results and further guidance.

The earnings miss Wednesday by highly regarded Macy’s raised a red flag about what’s to come from the slew of retailers set to report profits.

“As one of the top-performing and best-executing retailers in the industry, Macy’s second-quarter earnings miss is an ominous early marker for retail that could portend further disappointing results over the coming weeks,” said Ken Perkins, president of Retail Metrics.

Macy’s earlier cut its full-year same-store sales forecast, saying a 3.3 percent rise in second-quarter sales would not make up for weakness in the first quarter, when harsh winter weather kept shoppers away.

That seems to be the theme developing everywhere outside of heavily revised headline GDP (but not the prior estimates of that measure nor its internals). The “bounce” in the second quarter was more of simply “less bad” than anything remotely resembling the narrative provided by most commentary derived from “economists.” It has been a universal theme in the retail industry that “second-quarter sales would not make up for weakness in the first quarter”, which all sounds suspiciously like something far worse than just an aberration of snow or GDP figuring.

It is very striking as to how much this sentiment has shifted just in the past few weeks. After the GDP revisions and second quarter preliminary release, most commentary focused on the “surge” in activity and how that completely erased the lingering doubts after the shocking and unexpectedly wintry winter quarter. Such optimism has been encoded by previously unshakable beliefs in monetary command, to the point of oftentimes incongruent and incoherent analysis.

Included in this disappointment over the second quarter’s results is an almost earnest bitterness about the failure of promises to become realized. I can’t tell yet if it is a reawakening of some overdue skepticism and actual doubts about the efficacy of everything that has been guaranteed and offered by central planning intrusion, but reactions are far more subdued, the tone clearly shifted.

While retailers still bank on back-to-school sales for a bit of a bounce, many had also hoped the spring and early summer would bring positive news after an extremely difficult winter.

But so far, retail results for the quarter have generally been muted. Walmart executives said Thursday that American customers continued to be cautious, concerned about the cost of living and the country’s employment landscape.

For the New York Times to write about WalMart executives blaming the “cost of living and the country’s employment landscape” is a highly visible and almost direct rebuke aimed at the practitioners of monetarism. Inflation is “noisy” and we are purportedly enjoying the best employment gains since the middle of the last decade, yet here is the largest retailer in the world quoted in an outlet more often than not cheering the economy whether deserved or not directly contradicting the well-established story that QE has no direct costs and the economy is well on its way. The surreal nature of it all can only lead into a wider realization that something is really amiss, that the economy is far worse off than has been told.

If the second quarter is not much improvement over the first, then that means unambiguously that the first was not the aberration so assuredly peddled by the “accelerationists” and their QE-sourced regressions. According to Thomson Reuters SSSI, sales this year continue to track below the despondency of even 2013 (though they cling to the rebound idea, just pared significantly in its springiness) regardless of the quantity of sunshine.

Given that these figures are unadjusted for price increases, they represent absolutely atrocious results as a matter of course. The SSSI “should” be something above 3% as it was before the 2012 slowdown broadly changed the actual trajectory of the economy. Again, the fact that the erosion is far slower than most can appreciate or incorporate into their attention span does not change that it is still erosion (though we saw a very similar trend, including the ever-present optimism that it wasn’t there, after the housing-led slowdown from 2006 into the Great Recession).

There is, of course, a vision of a rescue for at least those like Thomson Reuters still clutching the favored story of recovery, as it appears the evolution of excuses has released another from its deep queue:

Like all good ones, it sounds plausible enough in isolation. 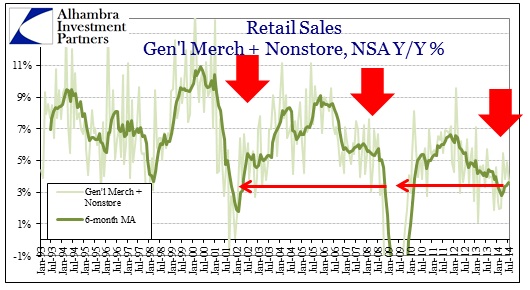