In Congressional testimony in late February 2013, then-Fed Chairman Ben Bernanke pronounced cautious optimism. It was his contention that the unemployment rate would improve in direct relation to the relatively new bursts of QE3 and QE4, but not so quick as to warrant a “premature” extinguishment. Undoubtedly, this was a full piece of his version of “forward guidance” which sought to assure markets that QE would be around for a good long while, but that the very fact that it would be needed for so long was not in any way indicative of any lackluster performance.

The entire point of QE is odd to begin with, as it seeks to perform an inflation miracle at the same time it seeks to assure that there is no danger from that very same miracle. The unemployment rate at that moment (which has been revised repeatedly since) was nearly 8% and growth had been highly uninspiring to that point. When asked directly for a prediction about when unemployment might get back to the 6% soft target that is close enough to suggest proximity to “full employment”, Bernanke stated that, “a reasonable guess for 6% would be around 2016, about three more years.”

The BLS’ current guess at unemployment is just 5.4%, or what everyone thought was full employment for the longest time. The economy crossed the 6% threshold last September, almost a year and a half “early.” That fact was all that Bernanke could bolster in his own defense after being roundly (and rightly) criticized recently by the Wall Street Journal, without ever acknowledging the complications that were abounding even back in 2013.

At issue was what was really driving the unemployment rate. Contrary to Bernanke of 2015, Bernanke in his “forward guidance” project was much less certain. In the press conference attached to the September 2013 FOMC meeting, the one where “everyone” was shocked that taper did not occur, the Chairman was asked again about labor improvement directly.

Later on he was asked about more context for that statement:

PEDRO DA COSTA. Thanks, Mr. Chairman. Pedro da Costa from Reuters. You cite meaningful progress on the labor market both on the unemployment front and in terms of payroll growth. But much of the decline in the unemployment rate has been due, as you know, to the decline in participation. So my question to you is—and also on the payroll front, some people would argue that, while there has been growth, it hasn’t been strong enough to keep up with population growth and make up the gap that we have from the recession. So, how high do you think the jobless rate would be if it were not for the decline in participation? I’ve heard estimates as high as 10 to 11 percent. And could you put the labor market in that context?

CHAIRMAN BERNANKE. Certainly. So, I think there is a cyclical component to participation, and, in that respect, the unemployment rate understates the amount of sort of true unemployment, if you will, in the economy. But on the other hand, there is also a downward trend in participation in our economy, which is arising from factors that have been going on for some time, including an aging population, lower participation by prime-age males, fewer women in the labor force—other factors which aren’t really related to this recession.

That was an interesting answer as it sets up what is driving some of the forces that are being called “secular stagnation.” There is nothing monetary policy can do about the Baby Boomers, except to destroy their retirement savings for a third time this century. Like Japan’s “lost decade(s)”, there is this curious dichotomy whereby policymakers take on the absolutely necessary role to encourage the economy but then walk that back unremittingly expounding on the limitations for them doing so.

To many not predisposed to the orthodox ideology, it sounds like a cop out. And we know that it is because Ben Bernanke himself was speaking quite differently about demographics as late as 2005. In being questioned about the mania taking place in housing, Bernanke was only too eager to ascribe a more helpful demographic tale:

Well, unquestionably, housing prices are up quite a bit; I think it’s important to note that fundamentals are also very strong. We’ve got a growing economy, jobs, incomes. We’ve got very low mortgage rates. We’ve got demographics supporting housing growth. We’ve got restricted supply in some places. So it’s certainly understandable that prices would go up some. I don’t know whether prices are exactly where they should be, but I think it’s fair to say that much of what’s happened is supported by the strength of the economy. [emphasis added]

There are numerous problems, of course, with this take on the 2005 economy – the very template that QE and ZIRP wished to recreate when they were delivered in 2008. Other than the fact that his entire prediction turned out about as wrong as possible in every facet, he is essentially saying that the housing market is strong because the economy is strong, and the economy is strong because the housing market is strong. Clearly, there exist such economic factors that are self-reinforcing but he was on a more basic level than that, as is this apparent turn in demographics from supporting the housing market in the middle of the last decade to now being a structural deficiency in the middle of the current one.

Unfortunately for his inconsistent case, the only event of major note in between those assessments is “cyclical.” If demographics went from highly favorable in 2005 to not so much by 2013, with the Great Recession stuck in between, causality is not so easily established as benign Baby Boomer trends. That unravels his entire point about judging QE through some structural unemployment standard, and thus even the entire recover itself.

And where that leads is to the end of monetary neutrality, the most insidious, mathematical convention that orthodox policy has unleashed into the world. If the Great Recession was responsible for the rift in labor participation, and the Great Recession itself is traced to these very financial elements like the housing bubble (a quite easy case to make and one that is universally accepted by anyone outside of mainstream economics) then monetary policy is indeed responsible which removes its troublesome absolution over experimenting at will. 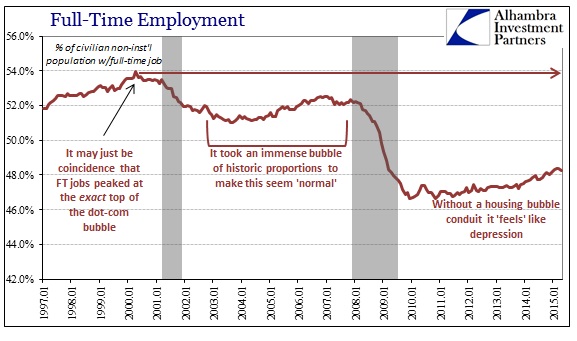 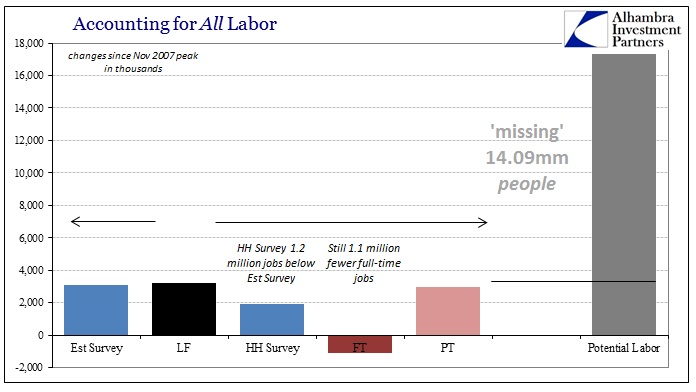 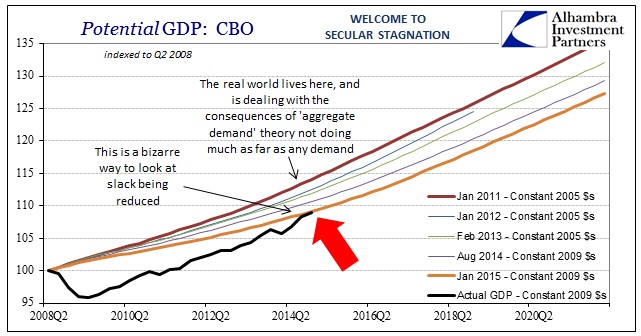 There is, of course, the very real possibility that Ben Bernanke has spoken almost completely out of expedience, and that his rationalization of the housing bubble in 2005 was actually disingenuous (likewise his later demographic doubts as, again, related to “forward guidance”). In that case, monetary policy would be also rendered useless because it is entirely devoid of any reference point. It cannot be that monetary policy is itself whatever it wants to be whenever it wants it; though such childishness is tragically consistent with the results. Detailed in such succession, along with the absolutely astounding misconceptions delivered during the 2008 crisis itself, it becomes clearer that its practitioners simply believe monetary policy works because they think it works regardless of the situation. That is the only constant in these monetary circles as everything else around shifts and moves, requiring that its explanations and standards do as well.

This problem is especially relevant at this very moment in time, as I think we are caught in a sort of policy limbo where “markets” are not entirely sure about what to believe and how that might affect the future trajectory. As I said yesterday, I am mostly convinced that credit markets in particular, along with pieces of the funding markets, are starting to hedge in favor of another maybe even impending QE. If that is the case, even just a possibility, it makes sense to at least review what market agents might be getting into.

On the surface it may seem like, in favor of market priorities, that monetary policy is at least consistent with the elimination of “tail risks” but such a belief does not withstand rational scrutiny. There is circular reasoning at the heart of it that does not end with Bernanke’s highly pliable views – in other words, the lack of “tail risk” these past six years (with a noted exception in 2011 which was dangerously close, though still unappreciated, to rerunning a Lehman scenario) may be more a matter of markets believing in QE than QE actually doing anything in that regard. It is the very extreme example of the placebo effect, especially when its proponents cannot much reconcile any real effect outside of that without resorting to self-serving inconsistency and outright contradiction.

If markets are so uncertain as to be almost yearning for more to save us from another unknown downside, then they may actually start to examine what that actually means in something outside of modeled fantasy. It may just be that funding markets, in particular, have already done so in at least some cursory fashion.