There’s No ‘E’ So ‘Q’ Is Just Formal Imagination

There’s No ‘E’ So ‘Q’ Is Just Formal Imagination

It all started with Japan so it makes sense to start there. As anyone who wishes might know, the Bank of Japan has pioneered the QE business to the point beyond extrapolation. They were first to do it, first to “have” to expand it, and first to go back to it over and over and over. BoJ is on at least QE10 if not QE22 or even 23. When QQE was first launched in April 2013, in what seems like a distant and now dismal memory, they proclaimed righteous construction of hitting their 2% target in 2 years. Despite missing that target already and being “forced” to expand QQE once already (with whispers of still another haunting over everything), the Bank’s version of “transitory” will stretch yet another year. Their expectation for that 2% “inflation” rate has recently been pushed out to now 2017:

BOJ Governor Haruhiko Kuroda and his fellow board members said in a report detailing updated economic projections that the slide in oil prices was to blame for reduced consumer-price forecasts for the coming two years. The bank now sees the inflation target reached around the six-month period through March 2017. At the start of this year, the expectation was for the goal to be realized in the fiscal year through March 2016.

As in the US, oil prices have gained the most scorn though not all; and what remains apart from crude oil is meticulously avoided. Central banks all over the world are joined, even conjoined by the “dollar”, into pulling apart their mechanistic mysticism of inflation. The very term QE refers to exactly that connotation, as “quantitative” is meant to deliver the expectation of a scientific regimen. The central bank does X amount and produces a known Y view of inflation. Thus, the situation of doing X and X^2, as in Japan, and producing Yx0 is not just an economic setback (in orthodox views; in reality, inflation is most unwelcome even at such “low” rates) it obliterates the whole theory.

Since modern monetarism, fused and infused with Keynesian central planning elements, is entirely predicated on at least some parts of the Phillips Curve, being taken out of the QE “equation” by stubbornly ungovernable inflation is fatal to the whole damned philosophy. That observation includes a US Federal Reserve and its policymaking body, the FOMC, that had been well-versed in Japan’s prehistoric experimentation with “Q”E (not that the “E” comes closer to its billing, either). At their June 2003 policy meeting, where Greenspan’s ultra-low discussion dominated, Japan was a heavy topic for those obvious reasons.

FERGUSON All of us around the table have thought about the situation in Japan for a long period of time. As you’ve reviewed and examined it, what lessons do you think we need to learn from Japan about the mistakes that can be made in executing some of these nontraditional policies?

MS. JOHNSON. Well—. [Laughter] The staff, as you know, did a paper that received some attention in which we came to the conclusion that the Japanese started too late.

As has been noted by none other than Ben Bernanke himself, who was present and lively at that meeting, the Fed did not make that “mistake” in our current “cycle.” In other words, there was no reluctance to engage in “nontraditional” policies, including but not limited to QE, which Bernanke now claims both success and heroic courage for. The record, of course, is far different in general economic terms but of inflation there is no doubt – QE did nothing for it.

With the Phillips Curve at the econometric center, inflation is supposed to be the central economic pivot which “controls” marginal economic function. Economists view inflation “expectations” as the method by which their madness becomes real; by increasing the quantity of bank reserves that is supposed to get businesses to believe such “money printing” will be inflationary (rational expectations theory) at some related but future point. Thus, businesses will respond, in theory, by moving up production to get ahead of those expected price increases, creating additional economic transactions (economists don’t discriminate here of whatever kind) that creates economic growth. That is all the “E”, as in easing; the paired “Q” is supposed to reflect the precision by which all this easing is to be wielded.

The PCE report from last week included yet another contraction in the monthly PCE deflator. That makes six out of the past 14 for a “nice” bookend on a 41-month period of often well less than the official and stated inflation target. That space of time started in 2012 with a 12-month period of 6 monthly contractions to wedge this policy deviation at the first. Somehow, Janet Yellen still suggests this is all “transitory”, as if nearly four years might count as much. And it might, but only if we are keeping score with Japanese time. 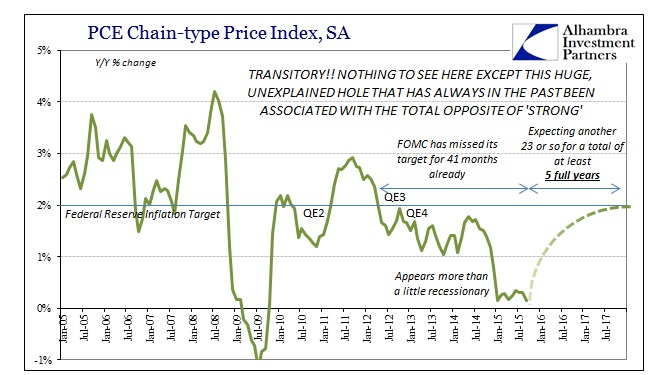 There can be no mistaking Bernanke at his word in that one regard, as the Fed did not hesitate and thus removed the “mistake” that they feel the Bank of Japan made in its first levels. And it still did not matter, at all; there is as much inflation in the US now as Japan with and without assumed policy indecision. There is no observed relationship between the “E” of QE and official inflation calculations. If there is no “E” then “Q” is but sullen and discretionary conversation. 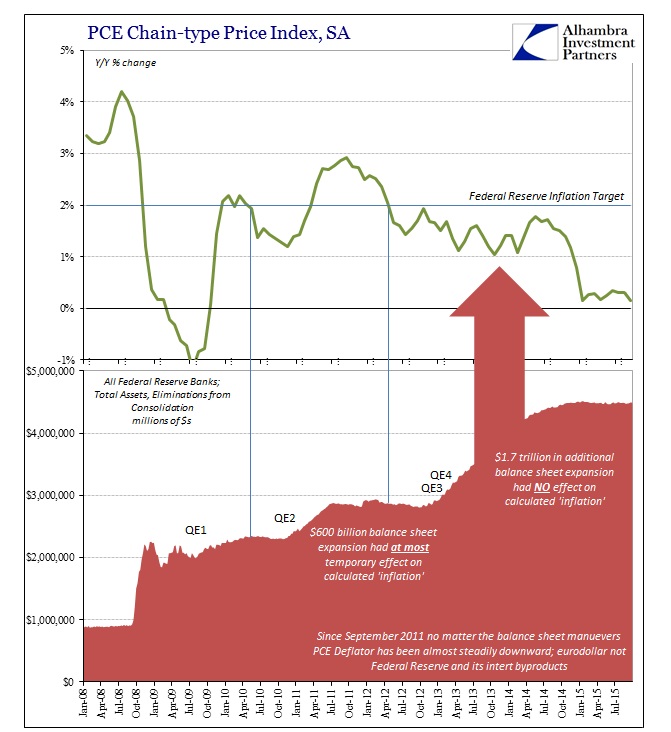 With that in mind, central bankers all over the world have been in desperation to suggest even the smallest and inane excuse. Janet Yellen in her “dramatic” speech after the September FOMC debacle kept pointing to long run inflation anchors due solely to “professional forecasters.” Everything else around the US economy with regard to inflation, including and especially market-based measures of expectations, have sunk to recessionary levels, which further undoes any suggestion of “E”, but some economists continue to expect long run 2% inflation because the Fed does.

Just today, Vice Chair Stanley Fischer pronounced that inflation was actually quite close to success already. Speaking in Washington, he was quoted:

We’re not that far from the 2% target–when the price of oil stops falling, and when the dollar stops appreciating.

Again, it has been 41 months already and counting, so “when” is a despairing qualification of the current problem. If oil and the dollar keep as they are, which, contrary to all Fed expectations and promises on the subject, has been the consistent case for seventeen months already, inflation success is left only in Fischer’s imagination. We can paraphrase Fischer as, “the Fed has been successful because the Fed has been successful; therefore don’t go looking for corroborative evidence and observation.”

That introduction to the dollar, really the “dollar”, applies the full weight of the whole fallacy. If easing isn’t really easing, then where might inflation fly? Again, the experience in Japan is applicable here and was even discussed back in June 2003 by the FOMC:

According to a very influential paper that Milton Friedman published in 1969, a low nominal interest rate imposes no costs but only benefits. In Friedman’s framework, an overnight interest rate of zero is optimal because it implies that society does not wastefully devote resources to economizing on transactions balances. While the example of Japan strongly suggests that a zero-rate environment creates other difficulties, his perspective is instructive in that what many people call costs of low short rates are actually related to the unwinding of schemes designed to make holding transactions balances less burdensome.

The entire QE, inflation and economy problem for orthodox economics boils down to this one generalization, in kind. No matter Japan’s real world experience in finding a very complex and often tortured financial pathology for concepts like “easing”, these economists continue to insist time and again on just such simplification and against all forms and kinds of texture and nuance. This extends beyond wholesale ignorance, which is a full part to be sure, but even if the global and domestic banking system were still operating in the 1950’s version the FOMC conceives it wouldn’t be “that easy.”

The immeasurable and now almost incomprehensible wholesale dynamics demand at least some attention, yet the FOMC continues as if Friedman’s abridging assumption were at all valid. They add that to many others, especially the generic concept of “money supply”, and wonder why the complex real world does not often, if ever, behave as expected by their cursory and surface depths. At every turn, philosophy and theory are held in full regard no matter how many times and in how many places completely and fully disqualified by experience. The central nexus of inflation in orthodox theory has been so everywhere QE exists at this very moment (capturing, literally, now Europe).

There is no “Q” because there was never any “E”; the lack of recovery and its latest downward slope thus sufficiently explained. 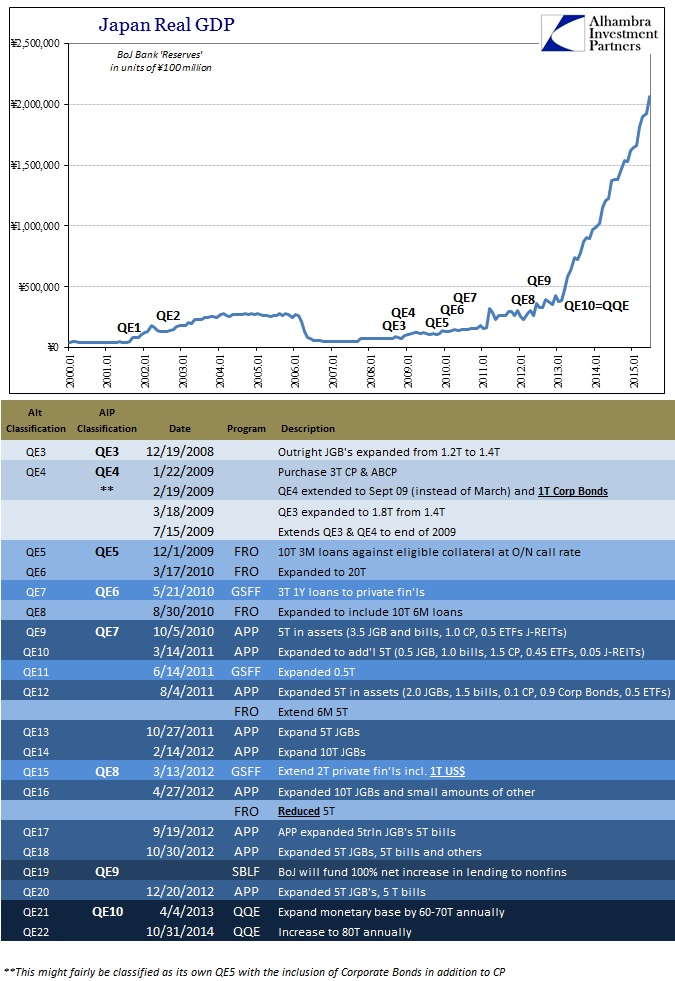