Where Is The Outlier Position Now?

Where Is The Outlier Position Now?

In its December 2015 policy statement, the one that raised the federal funds target corridor, the FOMC changed the language surrounding its inflation stance. They still projected the 2%, of course, but were now indicating that they were more certain than ever about it. In many ways they had to shift the wording because of the actions; the prior passage on inflation was far too nebulous to justify rate engagement. From the October statement:

The Committee continues to see the risks to the outlook for economic activity and the labor market as nearly balanced but is monitoring global economic and financial developments. Inflation is anticipated to remain near its recent low level in the near term but the Committee expects inflation to rise gradually toward 2 percent over the medium term as the labor market improves further and the transitory effects of declines in energy and import prices dissipate.

Overall, taking into account domestic and international developments, the Committee sees the risks to the outlook for both economic activity and the labor market as balanced. Inflation is expected to rise to 2 percent over the medium term as the transitory effects of declines in energy and import prices dissipate and the labor market strengthens further.

On inflation, the Committee pushed from “anticipated to remain near its recent low level” to just “inflation is expected to rise to 2 percent.” In both cases, the idea was energy and import prices (and other matters not disclosed) were “transitory” but the shift in language clearly meant that transitory was finally at its end in validating the policy action.

In addition, the sentence before inflation, related to inflation expectations, also implies further comfort on the part of the committee that the potential concerns from August had likewise dissipated. The FOMC shifted from “risks to the outlook for economic activity…as nearly balanced” and being monitored to in December “risks…as balanced.” Whatever it was that happened in August was still a question for them in October but no longer by December.

All of which makes the events of this week more damning in how monetary policy is determined in this kind of system. Both oil and China are back at it again, dragging so far the rest of the world toward revisiting what suspiciously looks like August. The FOMC declares that they are more certain than ever about “inflation” being transitory and oil (WTI) responds by trading into the $32 level for the first time since Christmas Eve 2008! The word “transitory” means literally temporary, yet oil has been on this course for more than a year and a half. Perhaps the Committee’s timescale has been thrown so far off because they are still talking about a recovery six and a half years after the last recession ended.

What all that suggests is, yet once again, they really don’t know what they are doing. They declare the troubles of August completely over when there was really no reason to suspect that was the case. Economists might have been fooled by the PBOC deployment of wholesale derivatives regarding what might have appeared Chinese liquidity and money, but the Federal Reserve is supposed to be up on these kinds of issues; they are supposed to be monetary experts since they claim to be able to manipulate money markets in order to dictate economic direction. As noted yesterday, the current turmoil isn’t a rerun or replay of August, it is the same trend only becoming more visible again. 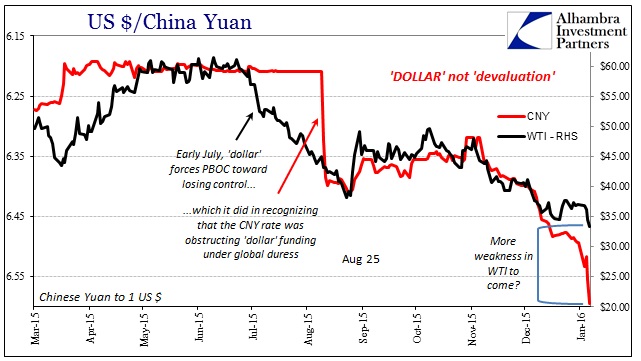 In the three weeks since the policy statement declared the economic and financial risks totally balanced they have instead become ever more so unbalanced in the most unfavorable manor possible. Renewed weakness not just in China but the US has markets here increasingly worried that the FOMC does have it all wrong; not even GDP will cooperate anymore. Instead, we are supposed to believe that the US economy is risking overheating when US factories are facing at least a $600 billion shortfall in orders.

In that respect, the further collapse in oil and other commodities actually makes sense. If the FOMC was correct about the economic direction, these kinds of market actions would seem far out of place; they don’t, they fit right in. Copper traded under $2 for the first time this morning and the eurodollar futures market continues to resist, actively, the idea the Fed will raise rates anymore at all. 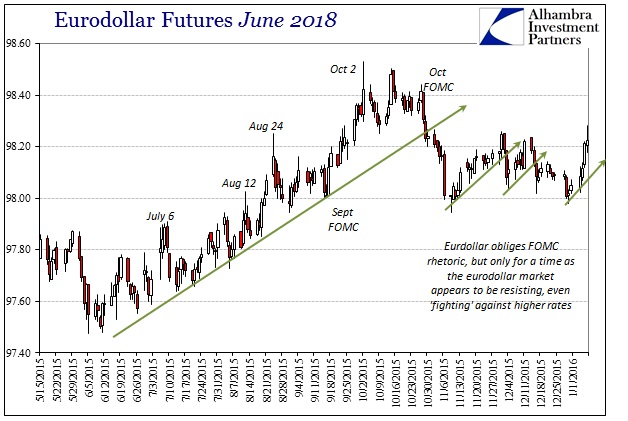 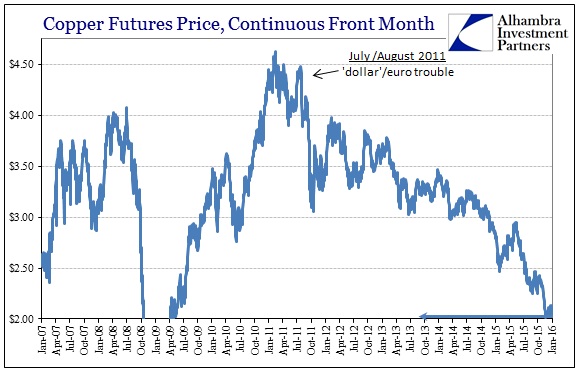 That point extends to commodities more generally and might be increasingly incorporated into stock prices. To lose both GDP and stocks would be a severe blow to FOMC credibility even among those already within the orthodox bubble. If not for stocks and GDP, what else is there to suggest “transitory” and the Committee’s policy justifications? 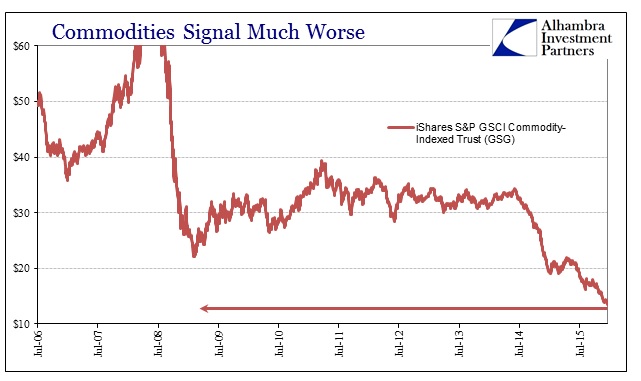 As you can see on the chart immediately above, commodities in general have been dubious about “inflation” and the Fed’s abilities through QE this entire time; including oil and copper prices. Stocks, meanwhile, held no such reservations and simply assumed QE would work as Ben Bernanke described – even though, and this is a big problem with the assumptions, neither QE1 nor QE2 delivered as such. Credit and especially money dealing factions were under no such illusions having been much more closely associated with the downside risks and potential of monetary ineffectiveness.

Where stocks took off shortly after QE3, high yield credit did so as well but only until the middle of 2013. From that point forward, like commodities, junk credit would tread sideways to lower with grave doubts about the credit cycle. That left these three classes primed along very different lines of risk expectations and perceptions; commodities (and “money”) the most pessimistic, thus skewing risk perceptions more so downward; credit in the middle about the credit cycle; stocks running ever higher in anticipation of upside risk.

Put another way, commodities (and “money”) were trading on conditions as they were at that point (still somewhat bleak); credit on conditions as they might be (better, but not great); stocks on recovery conditions as they would no doubt be (the full recovery scenario). The year 2013 was clearly the pivot, the last chance for it to all come together; and even at that point the most important factors were aligning against it. The recovery was the longshot. The economy here and across the world had slowed in 2012, close to recession itself, “forcing” central banks everywhere to essentially redeploy what clearly hadn’t work the first time. 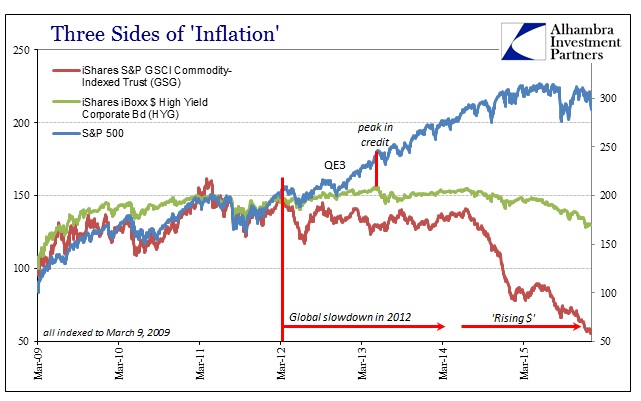 The great “dollar” break in June 2014 was entirely dispositive for money and credit, that fears about the events in 2012 were quite well founded – monetary policy not only didn’t work, it never would. Any true experience with the eurodollar system showed why. Stocks have been much slower to adjust, but increasing throughout 2015 they appear more cognizant of being the outlier. We see the same spectrum of risks only now with all three shifted downward; commodities and “money” about the worst of the worst case; credit thinking more of the worst case (with junk forcing more toward commodities); and stocks just now thinking that the recovery scenario once taken for granted might be, like high growth GDP, the only element that is, has been or will be truly transitory.

The lack of cohesion among these asset classes isn’t totally unexpected, but it stands to reason that QE has played a role in that. As I wrote Monday:

When looking back at that catalog of increasing financial and economic carnage, the pattern should be immediately recognizable to economists as “shrinking” or “tightening” money supply; all the symptoms are there and apparent. It is the classic replay of that condition, as reductions in money supply lead to monetary deflation (commodities and certain markets, including stocks that have, for almost a year and a half, gone, at best, nowhere, and for a great many places have already sunk quite significantly) and depressive economic conditions. To the orthodox economist, however, that just cannot be since ZIRP and QE are both “stimulative” while the latter is sold as “money printing.”

I think that explains, more than anything, the lack of transitory as the FOMC would have it; namely that “money” and commodities were first to realize what QE was and what it really was not. Credit came next, owing in good part to being closely related to global “dollar” liquidity. Stocks and the FOMC are vying for last because stock bubbles are all about rationalizing risks, while monetary policy has no choice but to believe its own fairy tales, even about the very money markets monetary policy is supposed to control.

With all that is going on, “unexpectedly”, in economic and financial conditions, “they” will still say that the economy is robust and somehow close to overheating. They have to; there is nothing else left but increasingly delusional rhetoric. Why else would the Federal Reserve declare recession and recovery on the same exact day?