In China, It’s All About FAI And It Is Contracting (Predictably)

In China, It’s All About FAI And It Is Contracting (Predictably)

Economists setting their expectations for China and PBOC “stimulus” should have been paying attention to retail sales; not Chinese retail sales, but American. They keep seeing a rebound that just doesn’t exist. US consumers, as the central marginal marketplace for the world economy of goods, have steadfastly refused the invitation of the unemployment rate to produce a worldwide economic resurgence. While mainstream expectations are set as if US labor market data is meaningful for that future, everything about current spending and production (globally) shows them devoid of any significance at any time.

In mid-April this year, for example, Chinese industrial production for March was figured to have accelerated to 6.8%. The level of growth wasn’t the reason for enthusiasm, as nearly 7% is itself unusually low for China. Instead, what got economists excited was how favorably it compared to the alarmingly low 5.4% despair of February. Rather than seeing the US economy for what it was and has been, and thus what the Chinese economy actually was and is, deference remained strong for orthodox policies despite what they had not achieved anywhere.

“Data from the investment-industry nexus show that the tried-and-tested stimulus measures of recent months have stirred up the physical part of the economy, especially towards the end of Q1, while consumption remained relatively robust,” Louis Kuijs, head of Asia economics at Oxford Economics, echoed in a note.

That “stimulus” euphoria proved instead fleeting and quite predictably so. Industrial production as of the latest estimates for July was just 6.0% again. Retail sales slowed back to 10.2%, below the 11.1% at the end of 2015. The IP estimates should not have been a surprise based on exports alone, which continue to contract in a reflection of the extremely weak overall global environment described by US retail sales. 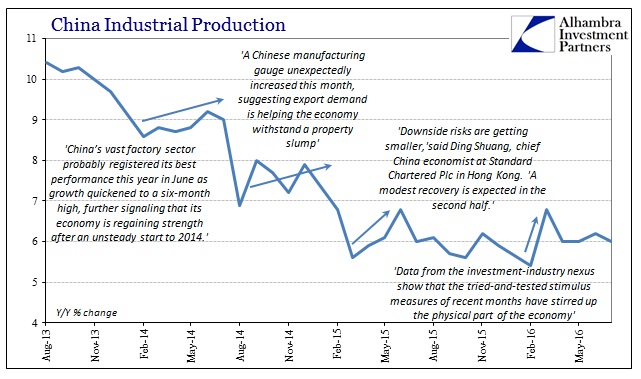 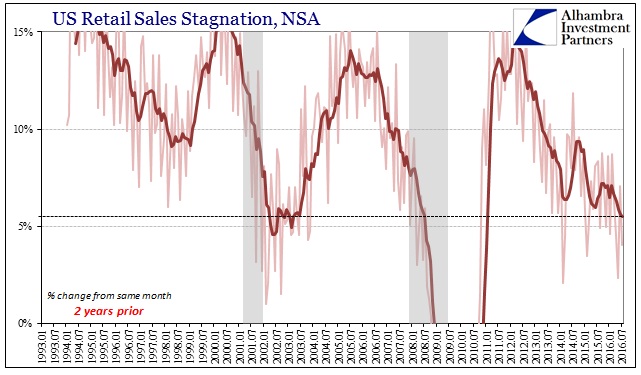 The lack of acceleration in Chinese retail sales, continuing to grow at and near decade lows, shows that overall weakness in industry remains the dominant setting for the Chinese economy. Chatter about transitioning to a consumer-led, services oriented modern economy are just that; chatter. Like “stimulus”, it is a story designed to provide some plausible-sounding basis for why the relentless decline will suddenly cease being relentless after so many years of it so far. 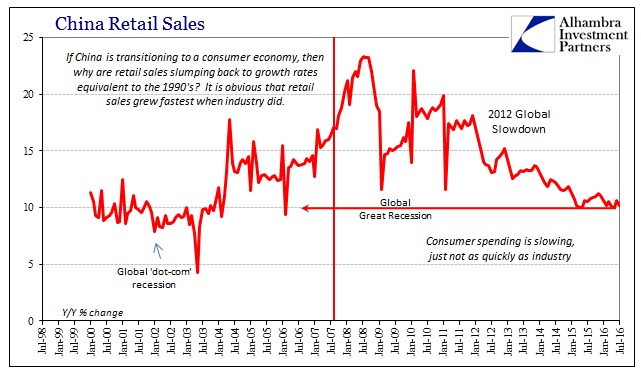 Outside of a one-month aberration (a true anomaly, appropriately using those words for once) in February 2006 where retail sales dipped to 9.4%, the data since 2015 started shows growth consistent with China’s “old” economy before industrialization truly set in.

Because this downturn/slowdown has lasted for so long and rather than seeing industry respond favorably to “stimulus” last year, fixed investment is further contracting in 2016. This is unprecedented since China’s economic miracle (really eurodollar “miracle”) period began about twenty years ago. Undoubtedly it is the very troubling combination of all of consistent economic weakness, ineffectiveness of any government policy, and financing issues particularly toward the end of last year and the start to this one. 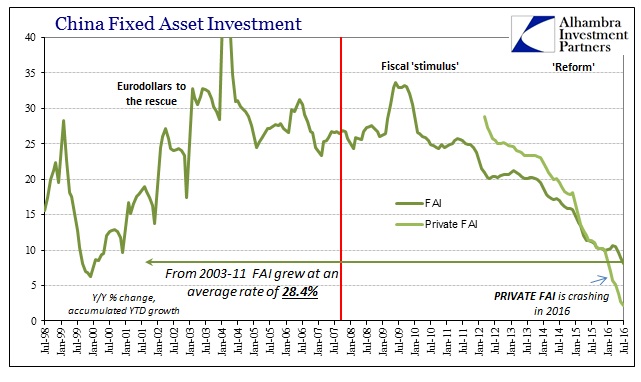 China’s National Bureau of Statistics reports FAI exclusively as accumulated YTD levels, but it only takes a little extra math to break it down into monthly figures. Private FAI, which is the engine that runs China’s economy including its vital urbanization demographics, turned slightly negative year-over-year in June. The latest estimate for July continues the same trend, predictably (not unexpectedly) indicating even more of a contraction. 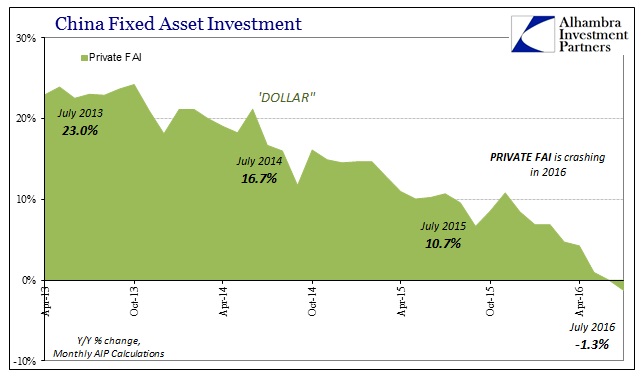 After a panicked official response to start the year, fixed asset investment via state-owned enterprises (SOE) pulled back in July. In the first half of 2016, the growth rate was above 20% each of those six months; July was just 14%. That is why overall accumulated FAI was just 8.1% in July, the lowest rate of the 21st century as government-driven activity isn’t and hasn’t been nearly enough to offset now private contraction.

It is unclear, of course, whether that is just monthly variation or whether, like bank lending estimates, it indicates “stimulus” efforts ramping back down again. Whatever the case, it is obvious that private capex isn’t responding at all to any intentional policy, reflecting instead the true picture of the Chinese economy and its relation to the global economy. Chinese business investment, once the engine of global growth, is preparing, it seems, for very hard times ahead and the government knows it. 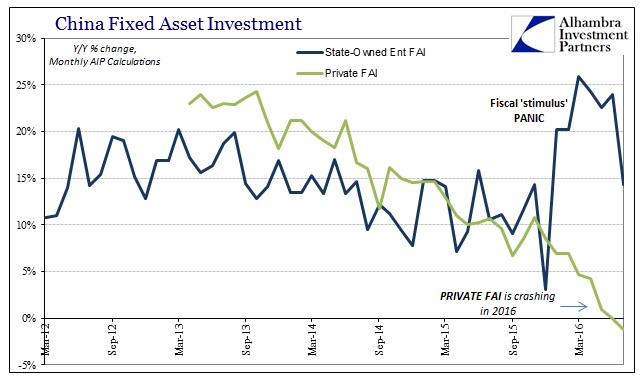 Thus, rather that expecting a sudden and sharp turnaround, it is comprehensively clear that the Chinese economy is in big trouble and not specifically of its own doing. It is only by refusing to accept the fact that “stimulus” doesn’t stimulate that one can report or write month after month “unexpected weakness.” But, as noted in my column earlier today, economists remain stuck in the world of August 7 – 2007, that is.

A recession is a temporary deviation from trend growth; a depression is a more-than-temporary reduction. Recessions are a normal course of the business cycle; depressions are monetary. No one need look any farther than US treasury yields to confirm it. The UST yield curve, as the eurodollar curve, is lower and smaller now than it was at any of the worst points in 2008 and 2009. Economists see that as a matter of “stimulus” and policy; eurodollar futures, in what has become a permanent departure, sorely disagree. The world of the last nine years and all its lost growth and opportunity was explained and even listed in those FOMC discussions that led right into it. On August 7, 2007, policymakers declared such a scenario highly unlikely, a trivial concern, but even though that confidence would last not even forty-eight hours it remains August 7 still to this day.

Moving forward into the world of August 9 easily connects and illuminates all these pieces, where continued use of the word “unexpected” as faith in “stimulus” are both matters of pure choice. 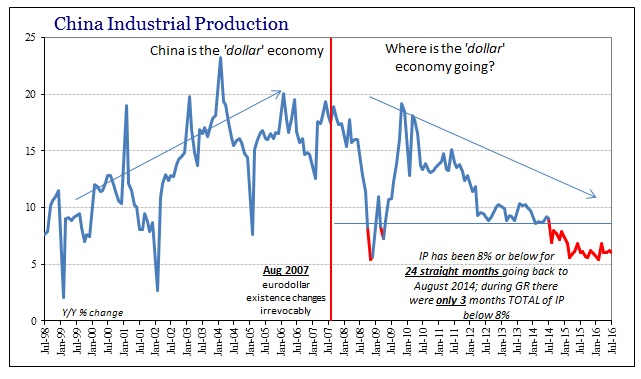