For the most part in 2016 retail sales had been better. “Better” is, of course, a relative term, and despite intentional colorization with respect to these types of economic accounts doesn’t automatically equate to “good.” Consumer spending data throughout 2015 was simply atrocious, not just on par with past recessions but among some of the worst months in the history of the data series. Therefore better than that isn’t actually impressive, particularly when it seemed more a function of season than economy.

Retail sales estimates for July 2016, as production figures already released, suggests spring is over. Overall retail sales, including autos and food, grew by just 0.71% year-over-year. The fact that it remains a positive number actually understates just how bad that level is. Retail sales in full rarely contract even during officially declared recession; in fact, retail growth rarely gets so close to zero. July’s initial estimate is worse than any of the alarmingly low rates from 2015. 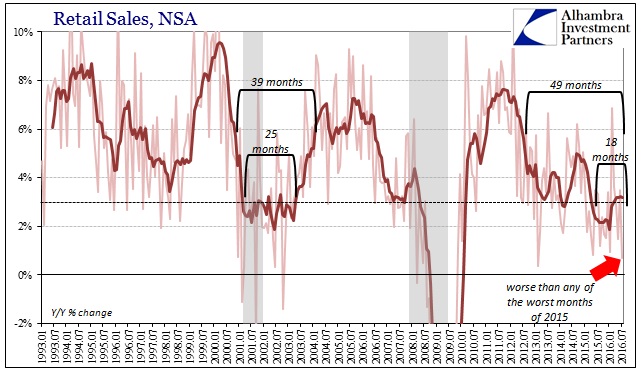 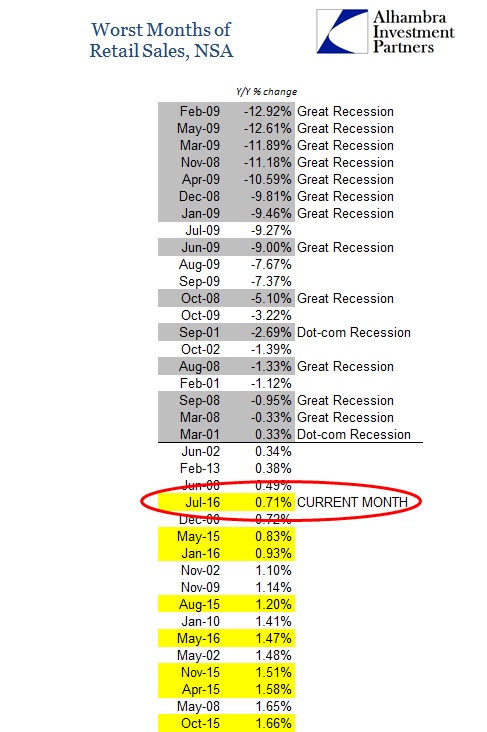 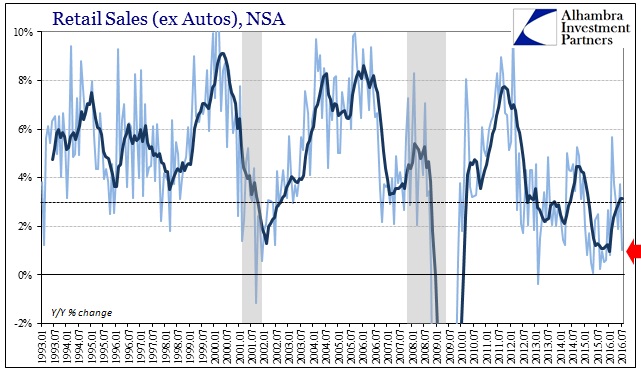 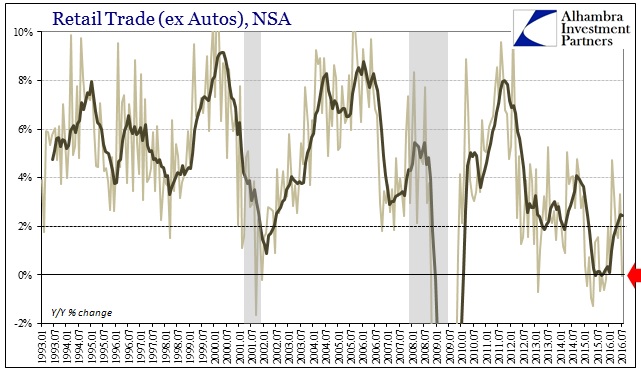 Despite all the very concerning data, or actually because of what it proposes about spending, nonstore trade continued to gain at more than double digit rates. After rising 16% in May and nearly 14% in June, nonstore retail sales, online and virtual shopping being the largest component, increased 10.1% in July. For the year so far, the average gain is 11.5%, as even in the darkness of the first three months this year nonstore retail gained more than 9% during each.

This further confirms what I had suspected earlier, that the gains in online shopping were not due to consumer expansion but rather exhaustion. The industry transformation is driven by structural forces and shifting preferences, but the pace of it seems very much related to macro concerns, in this case noticeably weak spending overall. In short, it seems the economic environment has deteriorated so much that more and more consumers have no other alternative than to seek price relief via internet outlets. Retail sales at general merchandise stores declined 0.5% in July, the second contraction of the past three months.

Retail sales of automobiles indicate very much the same about consumer exhaustion. After being robust seemingly no matter what during the past few years, auto sales have hit the wall. It remains to be seen whether that amounts to just a “plateau” as automakers have hinted, or whether it means full deceleration into contraction. Retail sales for autos in July 2016 were barely positive, just +0.2%. That is the second time in the past three months that auto sales have failed registered growth, the two worst (by far) months of the “recovery” period.

The 6-month average for sales of automobiles is just 3.5%, the lowest since 2010 and only about a third the pace of the start to last year. The rate of deceleration and the timing, coinciding with what we find in rapidly growing nonstore sales, might indicate that the “plateau” is the best case and not even the base case. 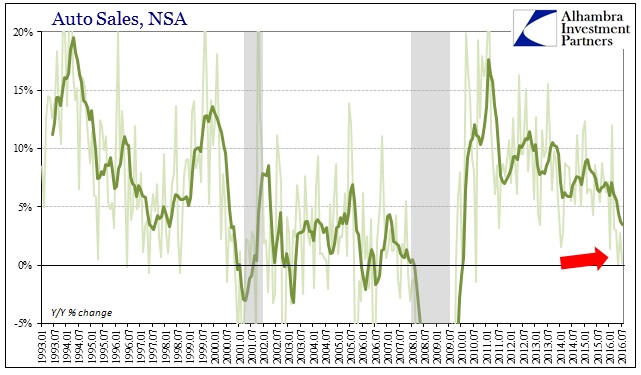 This retail sales report top to bottom would be of great concern by itself just in isolation. But this high degree of weakness has become a regular feature, suggesting recession-like conditions in the very important retail sector stretching now two years. Somehow during that time in what is very clearly an economic problem, the media as from policymakers and economists has gotten away with claiming repeatedly that consumer spending is “strong.” That is false and demonstrably so. 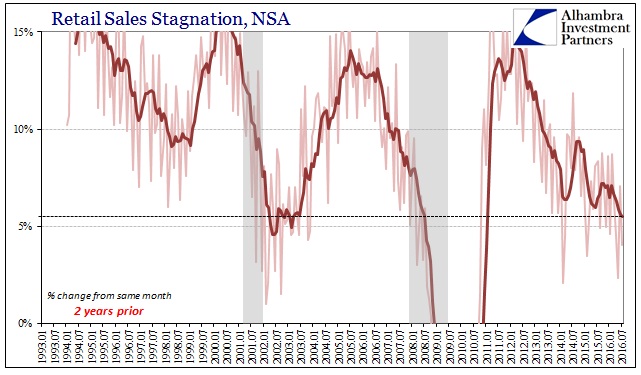 If auto sales even flatline from here, there is a very good chance that we will continue to find overall retail sales among the worst in the series for the rest of this year – not a rebound as (always) expected. Production overall is already contracting and has been itself for two years, meaning a continued downtrend for topline spending will only exacerbate what is already a big problem. At some point, the whole supply chain will move to liquidate the inventory overhang that remains dangerously high despite production cuts.

July’s retail sales report just further suggests nothing truly changed except the usual calendar narrative bloom. Consumers are showing an intensifying propensity to ignore the unemployment rate, not move toward the rhetoric of “full employment.” We know very well that there is and has been no wage growth, and these past two years of retail sales during the “best jobs market in decades” continue to indicate there might not have been so many jobs, either. Like productivity, retail sales are hinting at still worse to come. 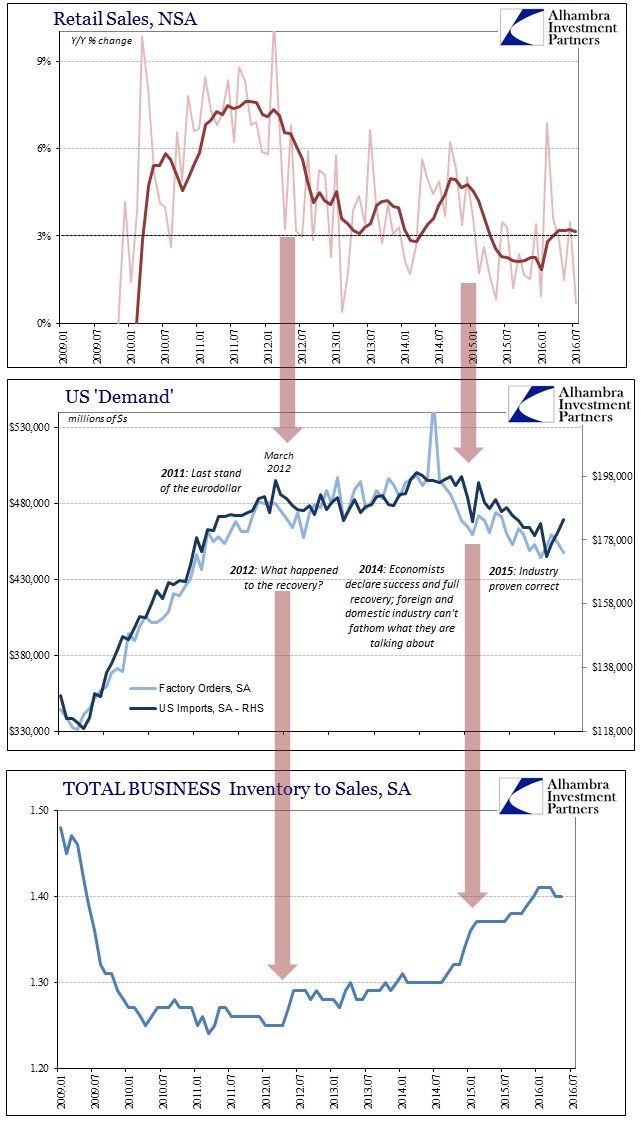