The Basis For The Changing Basis

The Basis For The Changing Basis

It is simply the nature of modern Economics to get most things backward. Positive Economics particularly in the form of econometrics has been like a declaration of ignorance, where Economists have formally decided to try and understand as little as possible. If you know anything about statistics you know why, for the one thing that bogs down statistical equations and regressions is the number of variables (a covariance matrix, for example, grows exponentially by the count of variables). For the sake of computational ability, the less complexity the better.

For something like the economy or markets, such a dedication to the mathematics first is foolhardy. It leaves Economists to try to explain things in regressive fashion, from correlation to common sense rather than the other way around. In most cases, they never get that far and are left with the absurd and the backward (“global savings glut “) particularly in the monetary realm. Money to them is just money, not worth the computational trouble to investigate.

So it is with the yen carry trade, though in this case the common interpretation contains some part fact. What is conventionally believed is that foreign firms and investors go to Japan in order to borrow yen cheaply to then convert into foreign assets yielding far more than may be obtained inside Japan. With the advent of ZIRP in the US and Europe, the carry trade gets much less publicity these days but still remains present in some forms.

It is merely structured this way philosophically because the mainstream is forbidden (by Economics) from considering all the very real reasons why yen would turn into dollars. With orthodox theory adhering to closed systems, the only answer allowed is speculation.

Yet, the carry trade is vastly more dynamic, therefore matching more closely the real world not limited to the need for simple regressions. Japanese banks have yen; all the yen they could ever need or want. Like bank reserves in the US, those created by the BoJ in its various QE’s do nothing but sit idle, as do the newest reserves now penalized by NIRP over the past year. Long before NIRP, however, Japanese banks had been, like European banks, supplying dollars only in their case via a yen rather than euro basis (what used to be called “hub and spoke”).

Structurally, then, Japanese banks are the one side of the carry trade being short “dollars.” They are so because the world needs “dollars” and they need Japanese banks to redistribute them (how they obtained is another question entirely, and one that stretches back with a rich and complex history to the very origins of the eurodollar system; in short, a digression best left for another day). At the worst points in 2008, the eurodollar panic, the Bank of Japan was second only to the ECB in the Fed’s ridiculously small dollar swap attempt at a solution.

Of late, the need for “dollars” has meant China as the Chinese need as many if not more than anyone else. China’s economic “miracle” was financed by them, and to some unknown but surely high degree via Japan. The “rising dollar”, which is euphemism for a “dollar shortage” which is itself a symptom of systemic instability, has robbed a great many places of flexible and fluid “dollar” flow. The lack of bank balance sheet capacity is everyone’s problem.

As complex as this might seem to be, it is actually the most straightforward part. What is even more mind altering is what these various agents and interested parties are doing about it; and the catalog contains all sorts of unknown measures and transactions that might appear to be one thing but are instead something entirely different. The Chinese are “selling” their “treasuries” as one means to fill the private “dollar” gap left as “dollars” have become rarer still, leaving us to (reasonably) assume Japanese banks as some major part of the monetary recession.

But what are Japanese banks doing? For the better part of 2015 and 2016 they were simply taking it on the chin, absorbing the absolute wrong end of the shortage. JPY/USD basis swaps got as low as -90 bps (according to Bloomberg, there are different quoted prices as standardization in FX isn’t yet quite so standardized) at the end of last November. From the “dollar” perspective, it was a figurative goldmine but no less important for our purposes of interpretation:

The negative yen basis swap acts like leverage where even yields on the interim “investment” are negative. Any speculator or bank with spare “dollars” could lend them in a yen basis swap meaning an exchange into yen. Because you end up with yen you are forced into some really bad investment choices such as slightly negative 5-year government bonds, but that is just part of the cost of keeping risk on your yen side low. Instead, the real money is made in the basis swap itself since it now trades so highly negative. The very fact of that basis swap spread means a huge premium on spare dollars; which is another way of saying there is a “dollar” shortage. Because of the shortage and its premium, you can swap into yen and invest in negative yielding JGB’s in size and still make out handsomely. There has been, in fact, a rush of foreign “money” into Japan to take advantage of this dollar shortage; the fact that there has been such enthusiasm and it still has not alleviated the imbalance proves scale and intractability.

If one side of the transaction is making a killing, the other side is the one getting killed. From a trading perspective, this makes no sense; from a monetary, systemic perspective, what else could Japanese banks do? The BoJ intervened, somewhat, last July, offering some limited “dollar” relief that ended up quite limited as well as temporary.

Beginning in December, however, the negative basis swap premium started to erode in nearly a straight line. There was a severe setback right at yearend (and not just yen/dollars), but all throughout January the basis became less and less negative. Throughout February, it stabilized around -45 bps, about half the rate at the low several months before. In mid-March, the basis jumped (less negative) yet again, almost to -20 bps – still a “dollar” problem but nowhere near as severe as all last year.

Not coincidentally, also starting in December, the “Japanese” have been selling their US Treasuries. It was enormously heavy in that month, so much so that it led to the even more ridiculous mainstream assertion that the Japanese (as well as other foreigners) were dumping their US government holdings as a warning to incoming President Donald Trump. That was never the case, and neither is the current convention:

How times have changed. These days, America’s biggest foreign creditor is unloading U.S. debt. And in a warning sign for the $13.9 trillion Treasuries market, Japan’s famously risk-averse money managers are giving little sense that an about-face is imminent, even as their new fiscal year is poised to bring a clean slate after a punishing stretch of losses.

This Bloomberg article correctly notes the basis swap, at least its history for once, and what seems in the mainstream to be still another transactional paradox. “The last time it was this cheap for Japanese investors to buy Treasuries and hedge away currency risk was two years ago, when they were piling in and pushing holdings to a record high.” And yet, here they are instead still selling them. Why?

(NOTE: the notes on the chart below are not mine and were included in the original article containing the chart). 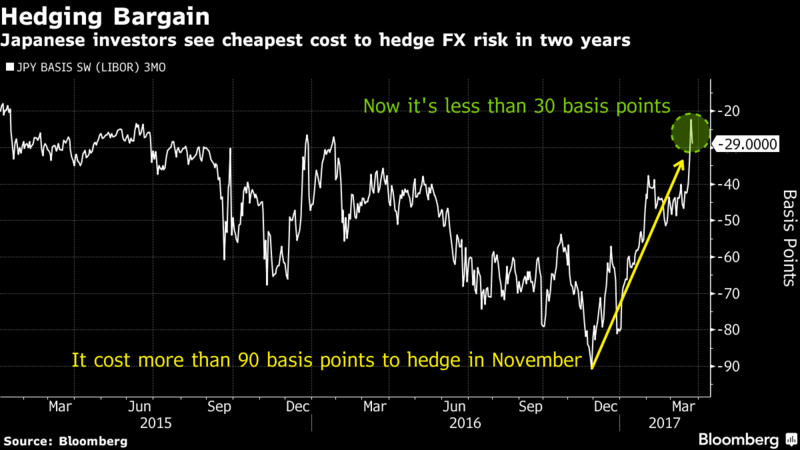 When the premium was so negative all last year, why weren’t their “dollar” holders jumping all over it (a form of covered interest parity)? Now that it has been erased, why aren’t the Japanese jumping all over UST’s again? From the backwards world of Economics, these are going to ever be mysteries. From the perspective of a global “dollar” currency, and one that is credit-based, the “why” is actually quite simple even if the “how” isn’t.

It is very likely that Japanese banks are simply getting out of the “dollar” business, lightening their “dollar” footprint as much as possible because they simply aren’t going to remain on the wrong end of it forever. Banks and financial firms will take losses in especially monetary arrangements if there is some light at the end of the tunnel – meaning that you will be rewarded for your losses by the (assumed) tremendous opportunity the loss-leading monetary intentions create for you.

If we narrow it down to just Japan “dollars” and China, this position becomes quite reasonable. The Japanese might have been willing to continue supplying “dollars” to Chinese banks at an ever greater and more painful cost if only to be best situated for when China gets to recovering again. If you start to believe, however, that China may never actually do that, a total reassessment just might be required.

There are, of course, other factors, conduits, and methods to more comprehensively consider, but it makes for a compelling window into the past few months. 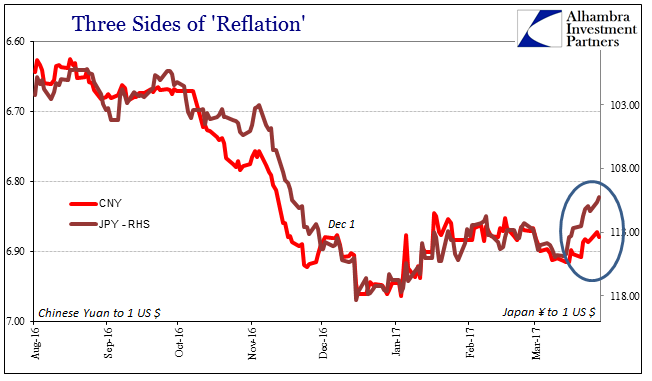 Any transactional imbalance can be rebalanced from either side, supply or demand. In most cases when it comes to money, it is so often supply that is the variable required for the restoration of mainstream sense. But every so often it might also be demand. There was every reason to suspect that there “should” have been a supply side fix, from covered interest parity (the inviting size of the negative basis) to central bank means (both Japan as well as China, where the PBOC “sells” its own “UST’s” but to achieve opposite ends) but there isn’t much indication that would ever be the case; a likelihood that surely played a role in Japan suddenly “demanding” fewer “dollars.”

If this is correct, and I believe there are enough exposed pieces to conclude in this fashion, then it leaves the world in that much more of a weakened position (especially China, might that be why CNY missed its latest scheduled reckoning?). But that is how these things go, economy as well as money. Every one of these “dollar” events leads to reduction because participants realize that is the only realistic outcome. So long as central bankers remain staffed by Economists, looking at the world almost always backward, how could it go any different?

Furthermore, over the past year central bankers who once at least tried imprudent experimentation won’t even do that anymore after finally coming to terms with this depression. At least when they were foolishly willing to attempt whatever there was an outside chance that they might even by accident get something right. The world is, in my view, despite the rhetoric about “reflation”, starting to more fully come to terms with worldwide Japanification. Even the Japanese.