What The World Needs Now

What The World Needs Now

What good would opening monetary policy do? The “audit the Fed” bill has been passed again, this time out of committee and possibly set for a floor vote in the House. Though questions remain about the Senate, with at least President Trump its prospects are better than at any time it passed before. Proponents of the idea want to make monetary policy an open matter, though it isn’t really clear why. They claim that secrecy is a hindrance or too much power, but in truth I fail to see much if any difference if the discussions were given to the public contemporarily.

After all, we have all the material necessary right now without the audit by which to burn the Fed to the ground. The transcripts from both 2008 and 2011 (as well as a good many in the years before and in between) show without any doubt or reservation that the FOMC has no idea what it is doing. That is true when comes to the economy, but more so and more importantly as it relates to the central bank’s primary task of money. Again, we can state unequivocally right at this very moment that the Fed doesn’t know from money. We can further state the consequences of that very dereliction in the same unambiguous terms, and do so, as I did earlier, using Ben Bernanke’s own words:

Countries on the gold standard were often forced to contract their money supplies because of policy developments in other countries, not because of domestic events. The fact that these contractions in money supplies were invariably followed by declines in output and prices suggests that money was more a cause than an effect of the economic collapse in those countries.

As I wrote in another context, simply swap “eurodollar” for “gold” and “offshore” for “in other countries” and the whole last decade is an open and shut matter, which is a particular problem because Economists like Bernanke were supposed to know everything about panics and depressions and we got both anyway. The transcripts already published to this point establish beyond all doubt culpability in both allowing it to happen and then doing nothing productive while it did. There is a reason we have lost and wasted a decade already, and Americans by and large know it without need of further statute.

So what good is it to make Janet Yellen’s “rate hike” discussions in 2017 available to us now? As I wrote in the aftermath of Trump’s election:

It’s not that I disagree with the audit as an idea, I just think it is the wrong direction to take. The problem with the Fed isn’t that it is a central bank that does central bank things, rather the problem is central bankers. It would probably be somewhat helpful to uncover what transactions went to whom and when, but if we are to audit the Fed the investigation should be focused on Janet Yellen and Ben Bernanke (and Alan Greenspan), not what specific orders were given by them to the Open Market Desk by CUSIP.

It is getting lost in details unnecessarily. There is no missing money smoking gun with which to prove beyond all doubt the Fed is a fraud. There isn’t any money there at all, which is precisely the problem. The money went missing in the 1970’s and it was central bankers like Alan Greenspan who claimed that it didn’t matter even though deep down he suspected all along that it did.

What is lacking today as well as the past few decades is not further transparency but the actual physical and political courage to use what we already know and what already has been corroborated. There is an enormous volume of the Members’ own words by which to do just that. We don’t need Fed discussions opened up to easily surmise that all of them over the past especially three years have centered around the words “we don’t know”, “we have no idea”, and “maybe it will be just transitory.”

The whole regime has to be purged not just from government agencies but rather from the public at large. For decades now the central bank has been given a pedestal it simply doesn’t now, nor ever did, deserve. It was a political shortcut convenient to both parties as a means to avoid answering uncomfortable economic and financial questions (particularly asset bubbles). I strongly suspect that more than anything that is why they have endured far longer than would otherwise be reasonable in a reasonable paradigm.

The media is complicit in the fraud by adhering to editorial standards which claim that only policymakers know something of value, no matter how many times they prove themselves unequal to even the smallest intellectual challenge. We see it everywhere today, how the global monetary system can remain a mystery of tangled contradictions in their assessments, but more easily untangled by stepping outside the orthodox bubble of improper foundations. For one example, as I wrote also earlier today, why might the Japanese be selling UST’s? Or China for that matter?

There would be no help to us at all with full Federal Reserve transparency in explaining either Japanese or Chinese money, and further than that why we should and do care. The mainstream, which includes monetary officials, still talk about the PBOC like they still talk about the Fed even after both have done nothing but screw up for years on end. Central banks are considered the apex of bureaucratic ideals even though, again, in the Fed’s case we have all the internal discussions to show the exact opposite. Auditing the Fed would not change, for example, how China repo is framed for public consumption:

The PBOC’s move is “surprising and the tightening message is strong,” said Frances Cheung, Hong Kong-based head of rates strategy for Asia ex-Japan at Societe Generale SA. The fact that the whole yield curve rose shows the market is concerned about further deleveraging, she said.

This is demonstrably false with but a little work. The “tightening” is not an intended policy but a reactionary one to conditions that have been in force for several years already, which remain obscure because convention assumes all the wrong monetary factors. Where is “tight” repo coming from? 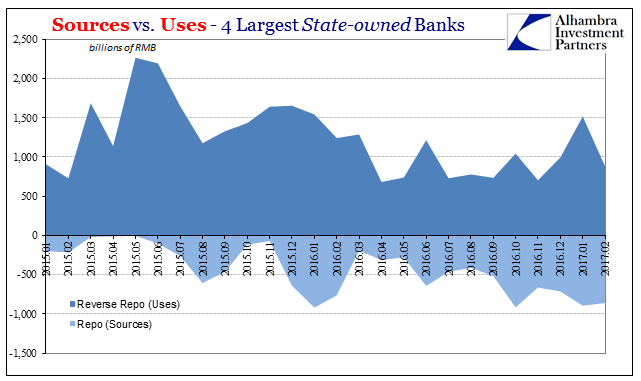 China’s largest banks, those that actually matter most, for not just repo, have been sucking up more and more repo resources over the past year, no longer supplying, on net, sufficient RMB by which to keep that market stable. Their net supply fell nearly to zero around September, which not coincidentally is when repo rates started going haywire, having nothing at all to do with February 2017’s so-called tightening. I wrote last week (subscription required):

That means these banks which are funding themselves increasingly via the PBOC and its RMB liquidity efforts are leaving the repo market more and more dry despite that (as well as other more ad hoc liquidity measures that are done week to week). The less supplied to repo, on net, the less there is to spillover in other markets (like unsecured SHIBOR). It doesn’t (can’t) add up to intentional PBOC policy, particularly when considering bank reserves. 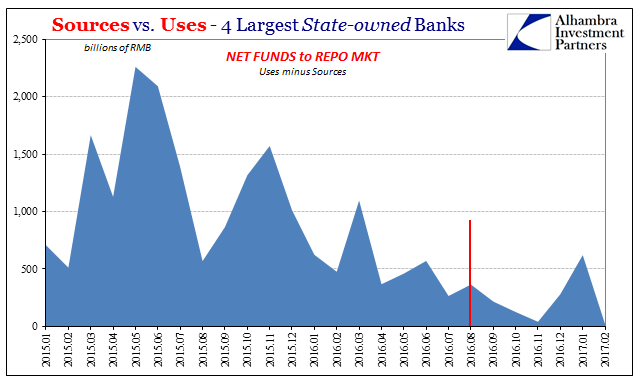 The reverse repo policy rate on the 7-day tenders was raised by 10 bps in early February to 2.35%, yet the overnight (1-day) fixing repo rate has been at that level more on than off going back to October – and the PBOC is given credit for this as if this is what they wanted all along? You can see the problem, I hope, with how auditing the Fed is not just immaterial but in many ways an unhelpful distraction. The entire global monetary system needs to be relearned from practically the ground up. It is a monumental task that isn’t served by giving the current regime any little deference at all.

As I stated above, what is needed now is not more volume for the mountains of evidence we already have that all uniformly describes central banks as bastions of incompetence, secret deliberations or not. What is required is someone, somewhere with the standing and more importantly the fortitude to start using it.