Since we’ve already cracked open the accounting, it makes some sense to take our example into an important corollary examination (if you haven’t yet, you’ll need to read through Part 1). In our prior examples, we’ve assumed that the swap of risk-free assets on Bank A’s asset side is a neutral trade. That is, there aren’t any costs or downside associated with FRBNY’s purchase. This may not necessarily be true.

In our previous example, I assumed Bank A was a traditional depository institution funded by deposits alone (with a small amount of owner’s capital). Those kinds of firms don’t much exist anymore at least in these places we are examining. A more realistic version is as presented in Figure 2-1 (though, again, using a stylized example of it).

Things get a little more complicated if you are swapping MBS assets for bank reserves in this situation. After all, if Bank A is funded on the liability side by wholesale techniques including repo (or even FX), that requires utilizing securities in inventory on the asset side for collateral. If they’ve disappeared into FRBNY’s SOMA holdings, then your ability to mobilize collateral in repo is diminished and that necessity isn’t in any way offset by the increase in bank reserves. Your job in funding is that much harder (made even more difficult by the near total collapse of unsecured interbank funding as an alternative).

In all likelihood, now you will have to borrow securities from someone else (or, in more extreme but common cases, engage in collateral transformation). That someone else could include FRBNY itself, who through the RRP has made some of its SOMA holdings available for rent.

And if one or several of the various QE’s takes your UST holdings, too, then repo becomes really challenging. In that way, QE could have been effective QT. In other words, what was supposed to have been “easing” might have been instead “tightening” at least in the repo market. Bank reserve assets are not perfect substitutes for other forms of risk-free securities. They are far less dynamic, which is why I characterize them as comparatively inert (and ultimately useless).

There is some evidence that did occur (going back to early 2013 in the immediate aftermath of QE4’s beginning, FRBNY had been buying UST securities that were OTR and then they abruptly stopped, suggesting that they had been made aware of at least part of the potential error). Repo fails, for instance, have been rising systemically for much of QE’s history. 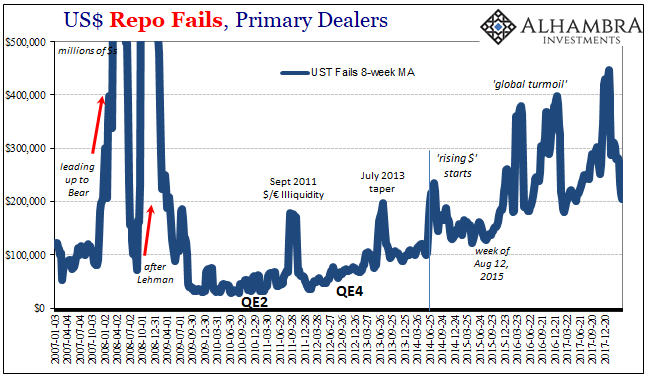 But if QE was really QT, then why hasn’t QT been QE?

The Fed stopped buying additional UST’s in October 2014, limiting its operations to rolling over maturities and maintaining a consistent balance sheet max. Last year it began to roll back those holdings slightly, with the future intent of doing more until reaching some unknown level of a new normal (as noted yesterday, that level could be zero for all anyone knows, which would be consistent with the actual mechanics of global banking as it is outside conventional theory).

As you can see above, however, this QT in theory hasn’t led to QE in practice. Removing less usable collateral hasn’t alleviated the tightness that may have arisen from collateral strain owing to misguided policy.

I do believe QT was the real effect of QE in repo, but the reason it hasn’t worked out in reverse is because the far bigger problem remains. In other words, the repo issue arising from collateral stripping was a relatively minor one that was in the same direction as the big one. It was consistent with systemic tightening in and out of repo.

Now, with QE in reverse, the systemic tightness and tightening remains even though there is materially less strain via FRBNY.

The clue as to the real problem is shown on the chart above. Repo fails really started to rise not exactly on QE2 and well before QE4. The demarcation was the 2011 crisis which was decisive in killing off even partial recovery in banking and global money dealing. Risk is the leading element, suggesting once again that it is balance sheet capacity that governs all these dimensions (I’ll save repo collateral and balance sheet capacity for another day, too). 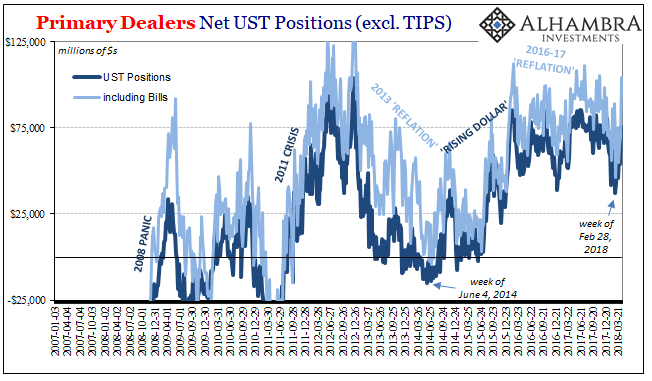 In other words, it’s exactly was we diagramed in Part 1 of this examination on bank reserves. The stuff that makes banks engage in lending or money dealing is what is missing, and it has very real negative effects on repo especially in the form of securities lending (or, for primary dealers, securities hoarding) as well as all the other pieces of global eurodollars.

The term central bank was more appropriate in George Coffin’s day, but even then it was overdone. The US$ system got along for a very long time in the last half of the 20th century without any bank reserves at all, a truly negligible amount. Why would they be so important after a bank panic? Put another way, what was the system using as an alternate for bank reserves prior to their sudden arrival with the global panic? 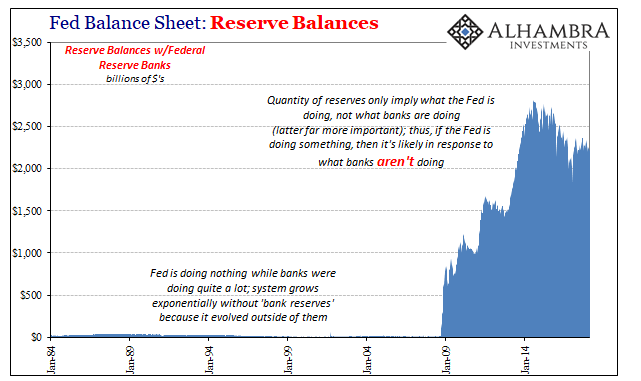 In that way bank reserves and indeed any central bank action tells us only that there is a problem; if whichever central bank is creating them, then there is something very wrong somewhere. Given how this eurodollar system evolved in its own methods and standards, you can bet that something will never be solved with bank reserves. I may be guilty at times of overstating how irrelevant they are, but not by all that much.

One thing is for sure; they aren’t money.