It comes down to a choice, really: find an alternative to Economics (capital “E”), or give Economics an alternative. The former may be necessary over time, a luxury we don’t really have. The latter, however, requires a sufficient number of open-minded participants already inside the intellectual fortress. Enough of a critical mass who realize despite all the R* and term premiums those don’t really explain anything.

And it first has to start with a group which realizes there’s so much that needs to be explained.

Every once in a while, there’s a glimmer of hope along those lines. It’s usually a paper or study published by the Bank for International Settlements (BIS), one which scratches the surface of this offshore dollar ecosystem (and it’s the same small group led by Claudio Borio and Hyun Song Shin). The tone typically takes the form of skeptical marvel; it really seems like there’s something there, something massive and massively consequential but that can’t be because…Economics.

The world is being reminded again in 2019 whether it wants to be or not. As such, the BIS along with the Swiss National Bank and even the Federal Reserve’s Division of International Finance are partnering for a conference to be held in November. The broad topic is uncertainty, volatility, and economic risks. The subtext of the conference is, from my perspective, “we know it’s not trade wars.”

Economists can tell there’s more going on. They can see that a few billion in trade penalties on goods traded specifically between China and the US doesn’t add up to what we can already observe – and what’s currently being priced for just down the road. There is an opening for a more comprehensive and frankly compelling explanation.

As such, I’ve submitted a completed paper (which only reminded me why I so steadfastly avoided grad school) to be considered for acceptance (the deadline was this past Saturday). I may have a strong distaste for Economics and often the central bankers who practice it, but they guard all the gates and like it or not they are at present the only influence on the political class and the public.

Why not try to give Economics the alternative?

The paper (thanks to T. Tatteo for the suggestion) is attached. For those not wishing to wade through 8000 words of academic-type prose what follows here is a summary of the findings (which will be very familiar to long-time readers). 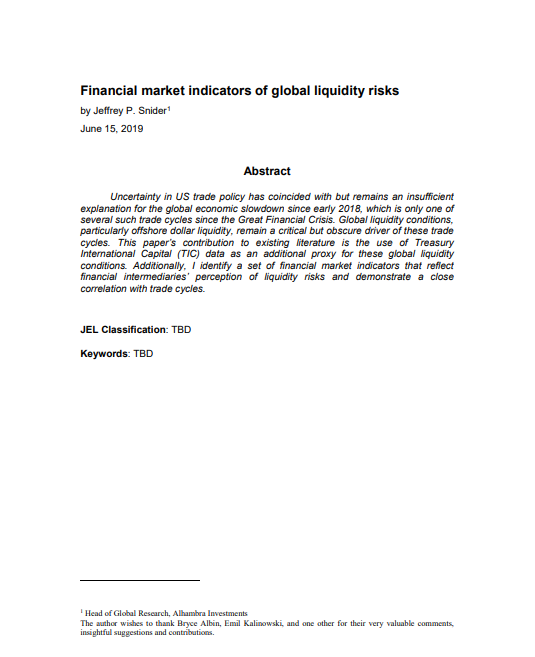 FULL PAPER CAN BE ACCESSED HERE

The most recent outbreak of uncertainty, volatility, and financial risks traces backward well into 2018 especially following May 29. This isn’t a new development, either; it is actually the third instance of pretty much the same thing repeating over and over. I use the bond market specifically US Treasury yields as the link between financial volatility and economic uncertainty.

Bond yields equate to a “flight to safety” because of very clear liquidity risks pervasive during these specific periods. Starting with global trade as an outlet into the real economy, we then begin to work backward into finance and money. 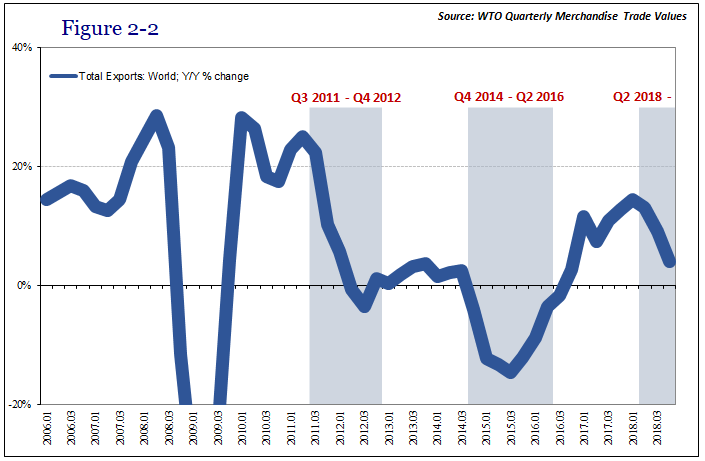 This only begins with the dollar exchange value; I’m not the only one who has noticed how the dollar tends to rise when worldwide financial messes and globally synchronized downturns materialize. 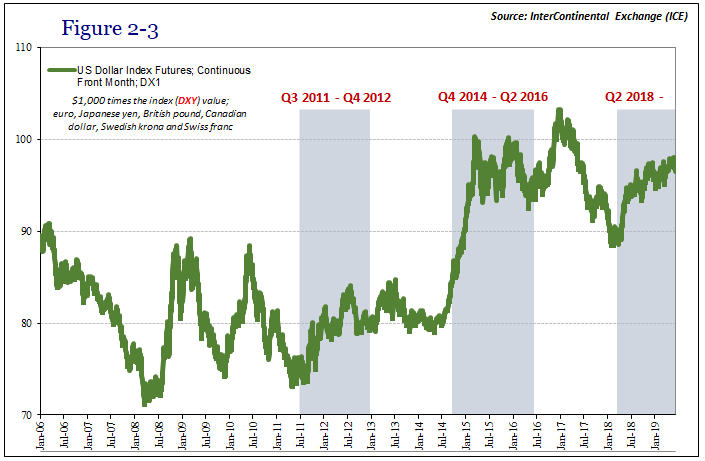 But how does anyone interpret this correlation? QE says there can’t be a dollar channel, all those bank reserves removing all considerations of liquidity – for Economics.

If we step outside of convention, however, there’s substantial evidence QE did not accomplish specifically monetary goals (I don’t attempt to address any questions about sentiment here). The TIC data, for example, stakes out the possibility of a systemic break – one dating back precisely to Bear Stearns. 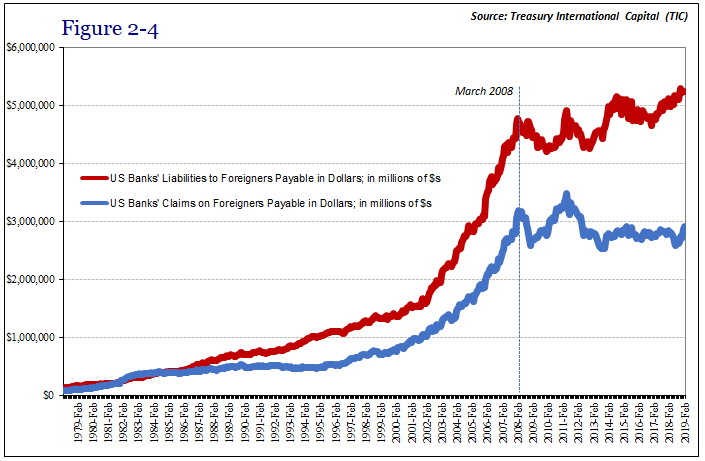 TIC’s banking-level data is backed up by its “headline” figures; foreigners tend to buy less US dollar assets, a lot less, during the periods in question (including the first, 2008, which isn’t part of this study; I’ve focused on only the three which have so far followed). Overseas buyers have even turned to outright sellers during them – including the current one. 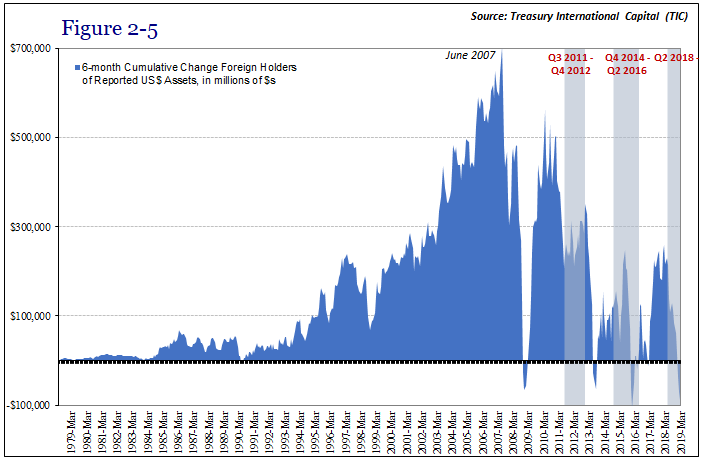 We therefore have an outline and a framework from which to begin interpreting the robust sets of market data pertaining to more visible financial dimensions, factors such as bond yields which may contain otherwise hidden liquidity risks embedded within them. Though the TIC figures are far from dispositive, they present to us an intriguing and startling possibility; this idea of an unsolved structural defect which rather than showing up all at once in one shot during the GFC may continue to intermittently plague a global system therefore the global economy highly dependent upon the behavior of its global reserve (i.e., offshore dollar liquidity).

The evidence for liquidity problems begins in repo. Starting with collateral, primary dealers “hoard” US Treasury securities. Not only does that tell us something about broad liquidity perceptions, it also proposes a liquidity-specific bid embedded within the UST yields themselves. 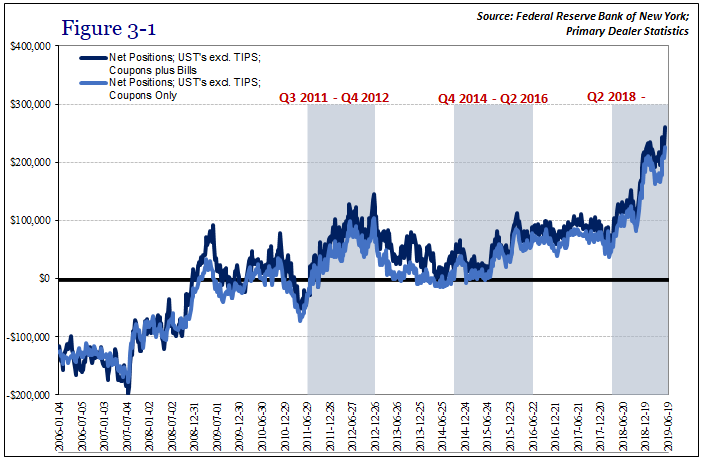 While dealers hoard the most “pristine” form of collateral, there’s weird things going on with the repo rate (the cash side). It tends to rise and remain above unsecured rates like federal funds (breakdown in hierarchy). 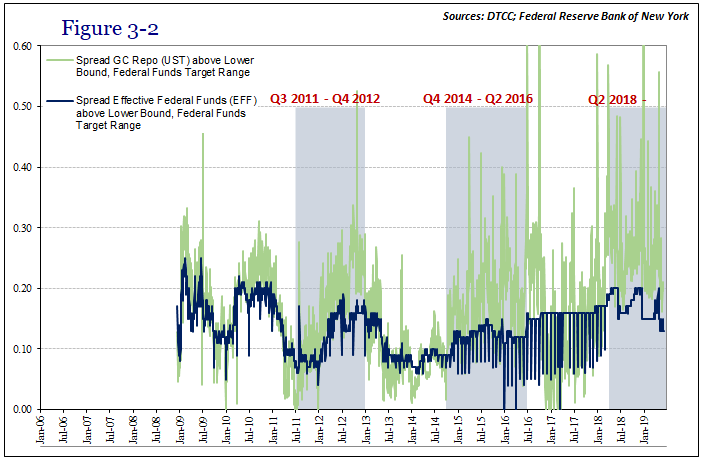 We also note the clear relationship to swap spreads.

Interest rate swaps tell us market perceptions of both risk (fixed leg) as well as funding costs or liquidity (floating). When the swap spread, that is, the quoted price of the fixed leg when compared to the same maturity US Treasury yield, compresses even to the point of being negative, it suggests a substantial degree of imbalance on one or both of those sides – perceived credit risks as well as funding difficulties. 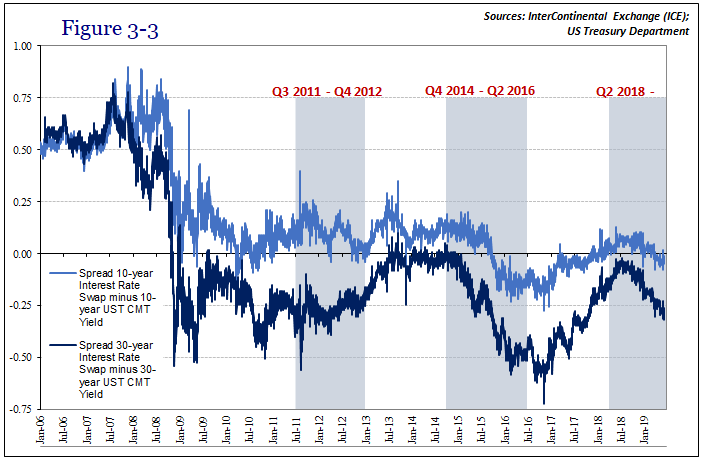 Next, we take these indications of interbank monetary trouble (along with the rising dollar) and interpret them in the constituent pieces of bond yields. Yes, Fisherian deconstruction (if you want to convince a bunch of Economists and central bankers, you have to first translate your ideas into their language).

The QE explanation of falling bond yields is that they have to be related to term premiums alone. The TIC suggestion of a structural defect, in light of the liquidity evidence, suggests the other two components: inflation expectations and the likely future path of short-term interest rates. 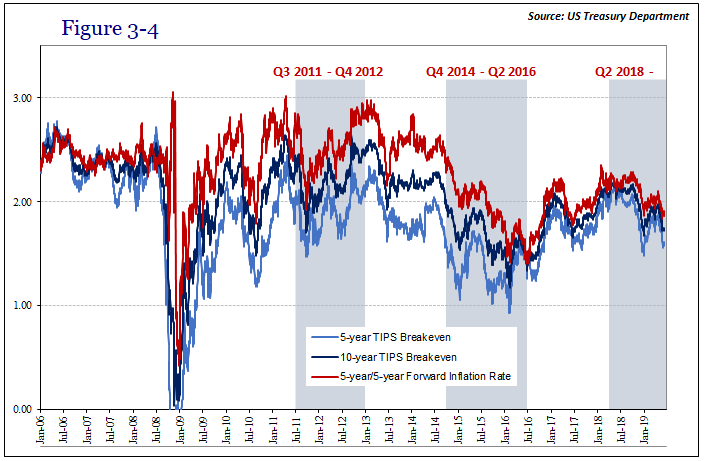 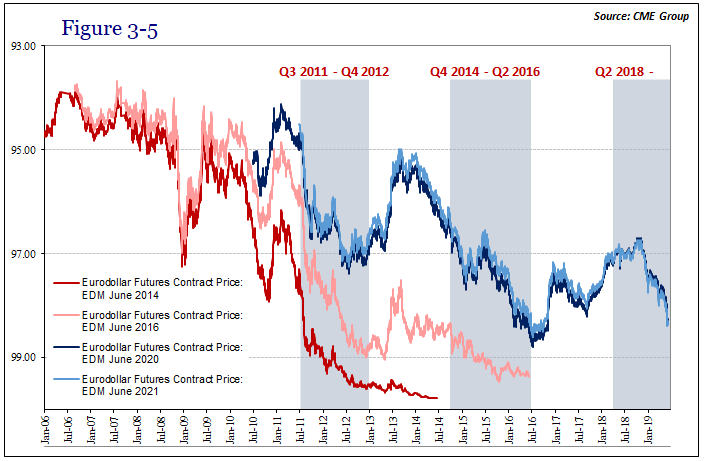 Therefore, bond yields are telling us something about the monetary system as it is which isn’t consistent with the accepted mainstream version (QE and bank reserves, therefore term premiums). Falling interest rates are instead Milton Friedman’s interest rate fallacy, tight money. 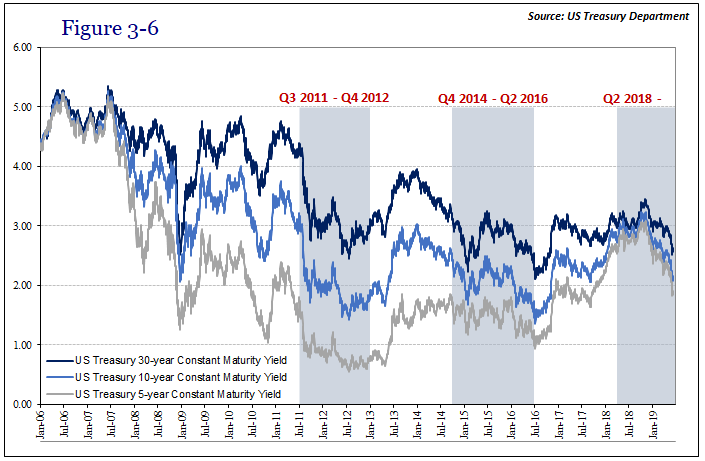 Several explanations have been put forth to explain the recent outbreak of financial and economic uncertainty. Rising protectionism has been the main focus in attempting to define causality. This has been joined at times by questions surrounding the Federal Reserve’s more recent monetary policy tightening, rate hikes either in combination with the Fed’s balance sheet normalization (so-called quantitative tightening) or in isolation.

As I’ve shown, however, what we can observe systemically predates all of those explanations and the current case remains consistent with prior occurrences. These all display the same general pattern and even specific signals, leaving for us the realization of a third additional event in what has been a series by the scorecard of global liquidity and measures of uncertainty like bond yields.

There are only oblique references here to shadow money and even less about the eurodollar system. That was on purpose – baby steps. We still have to convince Economics that QE wasn’t money printing. Only then can we move the discipline toward the rest of the main pieces of modern offshore global money.

Otherwise, we are left to replace Economics entirely. Given how that’s already being done in the wrong direction, MMT and socialism, there’s urgency to the task.

Therefore, anyone who knows of other similar conferences/opportunities where this paper might make an appropriate submission please let me know. And if not this particular work, then I’d be willing to write others to fit the theme/conditions.

While the circumstances surrounding Euro$ #4 aren’t good, obviously, small possible silver lining there’s an opportunity to introduce evidence because it’s getting pretty obvious (again) something big isn’t right. A few might even be willing to listen to it from the inside.

Huge thank you to Bryce Albin, Emil Kalinowski, and one other (who wishes to remain anonymous) for helping me organize, fine tune, and manage the paper. Whether or not it gets accepted for November, or any other time, it only stands a chance because of their contributions and insights.