More Than A Decade Too Late: FRBNY Now Wants To Know, Where Were The Dealers?

More Than A Decade Too Late: FRBNY Now Wants To Know, Where Were The Dealers?

I’ve said it all along; focusing in on bank reserves would leave you dazed and confused. It’s just not how the system works. After all, as I pointed out again not long ago, “our” glorious central bank had the audacity to claim that there were “abundant” reserves during the worst financial panic in four generations. “Somehow” despite that, it was a Global Financial Crisis that lived up to its name – global. 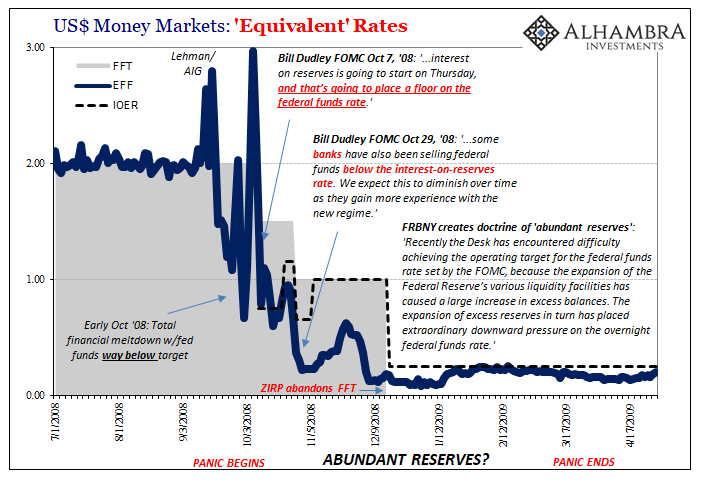 That’s effectively all QE ever was, the fullest extent of its potency. If those trillions in shiny new bank reserves got you to stop asking questions about 2008, then they had done their only job. A complete success under the standards of expectations policy, moneyless monetary policy. Pay no attention to what had happened, just be comforted by the fact Uncle Ben the Money Printer had done a whole bunch of…something.

It had been a severe test and officials flunked it. The Greenspan doctrine had been entirely something else than what you were told. We’ve all been taught from Econ 101 that the central bank was the center of the monetary universe, and therefore all it had to do was say something, not even threaten, but just say something and the markets would jump leading to predictable and beneficial economic trends.

Something about a Great “Moderation.” 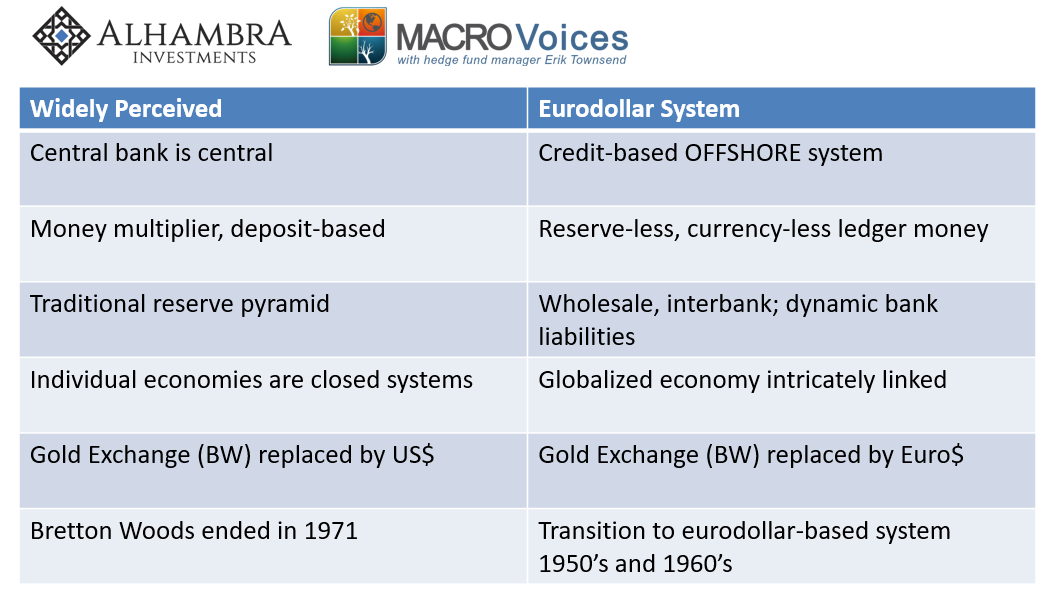 What Greenspan actually did was move around an increasingly irrelevant money market rate by a quarter point in whatever direction; occasionally by half a percent. And the financial media reinforced the message even though on so many occasions that message didn’t fit the facts.

The truth was, in light of where we are today, damning. Decades ago policymakers lost their ability to define and measure actual money in the economy. The banking system had come up with brand new forms of liabilities to achieve financial ends – very different transactions which ended up fulfilling crucial monetary roles that spanned the entire globe.

As I said recently, central bankers had long ago lost the ability to speak the monetary language. The GFC was a test and unfortunately for the world it proved that fact. Rather than admit the error (which no central banker will ever do), they instead upped the quantity of smoke and mirrors, built further upon the puppet show of QE and bank reserves.

At every step, they’ve been aided by a compliant and uncurious financial media which has uniformly equated QE with “money printing.” On the one hand, it was understandable. Accepted editorial standards mean deferring to the experts and officials. If Ben Bernanke and Janet Yellen weren’t willing to correct the language and specify what QE really was, then what else would anyone be able to write?

Even today, they still call it that.

That’s the thing about seeing everything from the eurodollar system perspective – beginning with bank reserves. The real monetary system is bank-centered, not central bank centered. As such, you can then see what bank reserves really were – not a whole lot. At best, QE was nothing more than an asset swap; cleverly disguised, sure, but still at most a potent magic trick.

Coming at everything instead via the eurodollar system, the idea of bank-centered applies to everything. You begin to appreciate why there was (or had been) so many derivatives. The way in which dealer banks (dealer, as in the non-technical term meaning global money dealing banks rather than specifically the 24 current primary dealers) put together and maintain their balance sheets is paramount.

The tools and transactions which allow them to do this are the real money in the system. Bank balance sheet capacity, not bank reserves. You can have all of the latter you want, without enough of the former the global system will go nowhere. Or, as we were reminded last week, less than nowhere. Again; now for a fourth time.

Specifically with regard to fed funds, repo, IOER and all that, we’ve been pounding on the one basic element which can only have been responsible here. Bank reserves, again, were just not relevant. I wrote back in April:

Having written all that, we can just go back to my original premise. You don’t really have to read through all the fine print. It helps, but it’s not required. You can simply appreciate that when EFF is closing in on, and now above, IOER something must be wrong.

Where are the dealers? 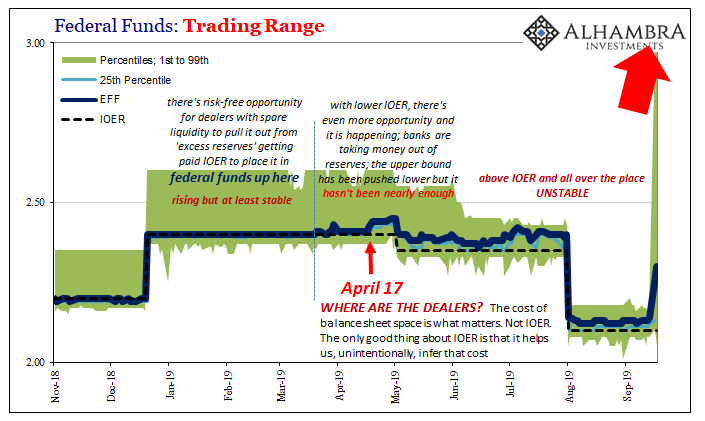 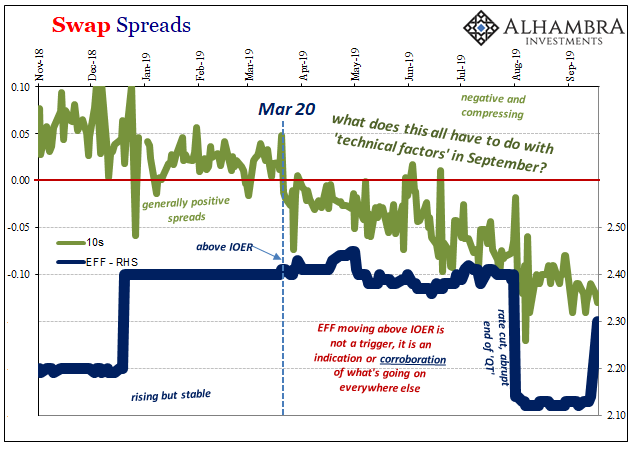 Time and again, as these negative trends go, that’s the only question which should spring to mind. Not the level of bank reserves, but why are dealers seemingly absent in so many ways and places (which correlates fed funds to swap spreads)? Reserves may be abundant but dealers are not. That’s what has been noteworthy about fed funds all this time, more than a year and a half.

Fed funds is nothing, irrelevant, the sparest of spare liquidity. And yet, it has been increasingly clear that if dealers won’t go into fed funds there must be a pretty big constraint on the monetary element which does matter – the balance sheet capacity which drives all monetary conditions.

After the absolute mess last week, officials in New York aren’t able to keep up the full charade any longer. Not for nothing, it was a very public embarrassment at the worst possible time in which many in the financial media for once asked that single most important question:

John Williams, president of the New York Fed, on Friday questioned the hesitance of the banks in an interview with the FT. “The thing we need to be focused on today is not so much the level of reserves [held at the Fed],” he said. “It’s how does the market function.”

Some market participants have claimed that the week’s volatility arose from a shortage of cash in the financial system, stemming in part from the unwinding of the Federal Reserve’s post-financial crisis intervention. However, Fed officials are focused on the role of the banks.

Mr Williams and Lorie Logan, senior vice-president in the markets group at the New York Fed, said officials were looking at why cash failed to move from banks’ accounts at the Fed into the repo market, where banks and investors borrow money in exchange for Treasuries to cover short-term funding needs.

After the near meltdown and repo rumble, more than twelve years too late, FRBNY is only now wondering, where were the dealers?

By the way, this is not a positive sign. As we’ve seen in Europe, this leaves policymakers to choose between only two false choices. The first is Draghi’s – just do more of the same because, what else can you do? The second is his dissenters, which is also essentially Jay Powell’s position – just lie and say everything is awesome and hope that the global system doesn’t actually experience a breakdown.

Even if officials at FRBNY are taking a more honest look at the system from the correct bank-centered perspective, and there’s no evidence they are doing that, they just seem to be confessing to what everyone else has been able to see, it is still a long, long, long way to truly understanding and appreciating just what balance sheet capacity really, really means.

And then a lot longer still to where anyone might be in position to do something about it, especially with central banks nowhere near its center.

This is nothing more than the equivalent of officials being publicly shamed by a week of fed funds and repo blowing up in their faces, and being forced to admit the smallest chance that maybe, possibly, perhaps they don’t speak the language after all. QE and bank reserves might not have been what you were told.

Where are the dealers? Policymakers at FRBNY would now like to know – even though it has been their one damn job for decades.