The Reason For So Many Lies: He Finally Realizes He’s In Way Over His Head

The Reason For So Many Lies: He Finally Realizes He’s In Way Over His Head

This is not a man who’s comfortable thrust into a position of leadership. Say what you want about Ben Bernanke, and there’s a lot that still needs to be said, he at least carried on with the arrogance through thick and thin (almost entirely the latter). Jay Powell sounds like a boxer who just realized the lightweight he thought he was fighting put on 75 lbs of muscle and has been practicing by sparring with world champs.

So, when he still says he’ll be the champ the words instead come out of his mouth all squeaky and unimpressive.

When you have to lie, you don’t really have much of a case.

The Fed’s Chairman appeared on the CBS News program 60 Minutes the other night and caused quite the buzz; which, as always, was the point. These central bankers are big on words and short on results, therefore little talk about what really happened; the conversation filled instead by incessant innuendo.

I did this. I did that. And I got a whole lot more where that came from. Sure. But what did all that actually get you?

Let’s start with the first and perhaps most important of Powell’s outright lies. From the program transcript:

PELLEY: But I’m curious about that moment for you personally. When you were sitting in your office, through that door over there, and you were watching your Bloomberg Terminal and the world was coming apart, what did you say to Jay Powell?

POWELL: Well, what’d I say to me? You know it didn’t happen. It wasn’t a light switch being flipped. So we saw it coming. And we had been thinking about what we would do. [emphasis added]

See what I mean? Huge whopper right here. If they saw anything coming, then why weren’t all those 2008 programs up and running around, say, February 20 when the bond and oil markets began to make serious noises about a GFC-style disruption? Instead, what really happened was a frantic, desperate FOMC trying to play catch up to a crisis it went into entirely flat-footed, dumb and happy.

Who will forget the Sunday announcement of renewed ZIRP, at least $700 billion in more QE and (minor changes to) overseas dollar swaps all while openly encouraging the banking system to access its one remaining Depression-era program? The mainstream media obviously did, but markets sure didn’t – especially the stock market the very next day in its worst single day since ’87. 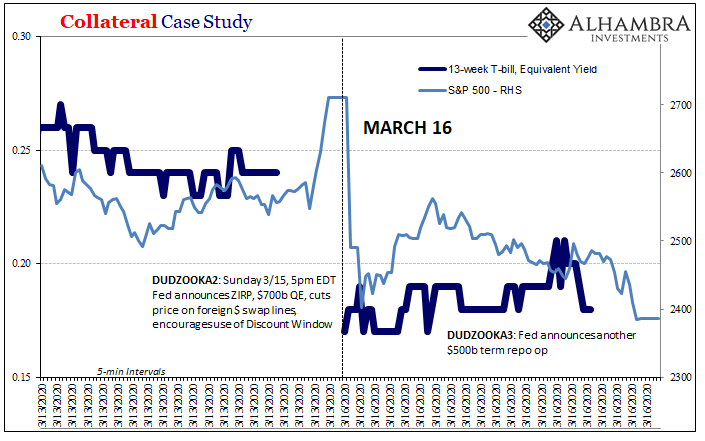 They saw it coming? Bullsh##.

And this is more than just March. Go all the way back to the last few months of 2018, a year and a half ago. The Fed has been behind events the whole way down, first clinging to rate hikes while forecasting more with inflationary growth in 2019; only to see instead rate cuts forced on reluctant policymakers by a globally synchronized downturn they weren’t prepared for catching the US economy in its vortex. 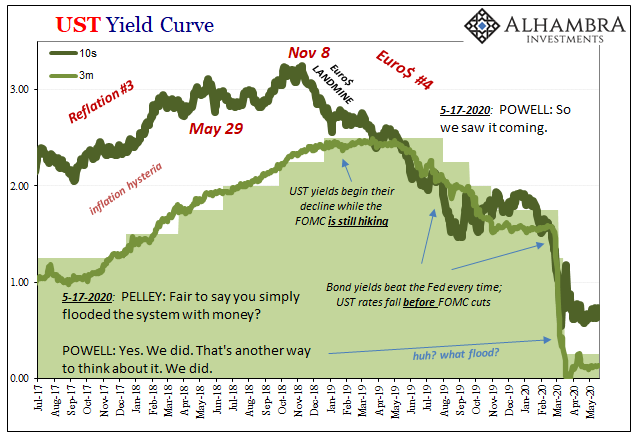 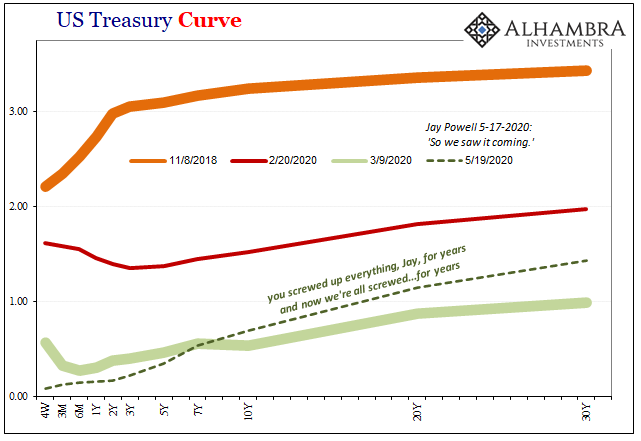 Why the obvious lying? Because right now they actually, finally appreciate the trouble they’ve let us fall into. In a central banker’s world the way out of big trouble like this is to reassure markets and economic participants; psychology rules.

If you’ve been left with the (correct) impression the Fed was a bystander during the March liquidations and fire-sales, a totally irrelevant gang of incompetents, then that’s going to hinder the Fed’s ability to make you think they’ve got the aftermath completely covered by all these complex and technical sounding programs. If you thought that you’d act contrary to how Jay Powell wants, what he thinks he needs from you.

And what did all those programs accomplish? Huge Lie #2:

PELLEY: Fair to say you simply flooded the system with money?

POWELL: Yes. We did. That’s another way to think about it. We did.

PELLEY: Where does it come from? Do you just print it?

POWELL: We print it digitally. So as a central bank, we have the ability to create money digitally. And we do that by buying Treasury Bills or bonds for other government guaranteed securities. And that actually increases the money supply. We also print actual currency and we distribute that through the Federal Reserve banks. [emphasis added]

Even I’m shocked at how brazen this is (even after the whole “too many Treasuries” lie of early 2018). Notice what Powell did – on purpose. He knows bank reserves are not money but he really, really needs you to think that they are, so he intentionally adds that last sentence on the end so that you mentally equate bank reserves with “print actual currency” distributed through the banks. 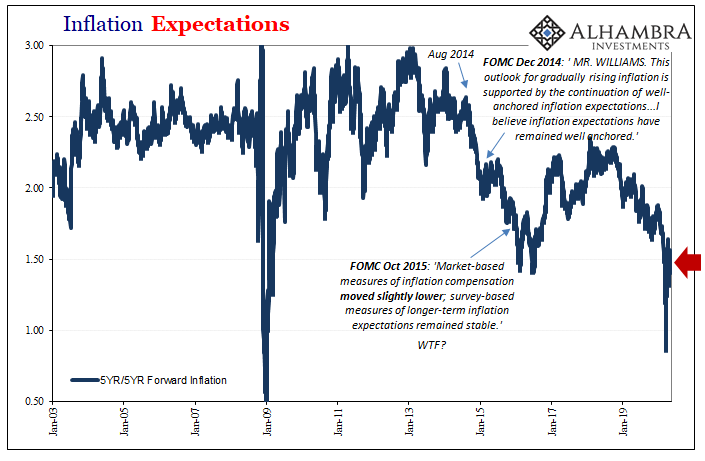 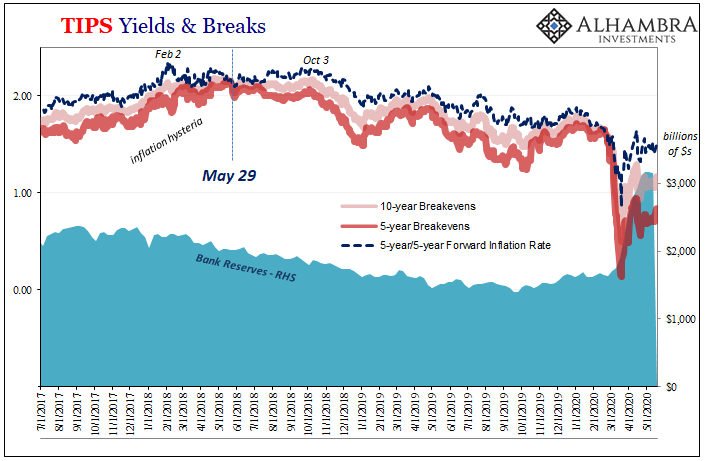 The biggest so-called money printing program in the Fed’s history, dwarfing 2008 and then some, and it didn’t even move the needle! Inflation expectations short and long run remain hugely depressed as do bond yields and curves.

Central bankers rely exclusively on inflation expectations, which explains the distressed attempt to stoke them with his despicably dishonest phrasing. Central banks don’t actually print money, so in lieu of actual printing the best they can do is make you think that they can so that you act on what you’re being told (rather than what you can plainly see in front of you).

The charts above present a very different reality than a desperate Jay Powell needs for the Fed to conduct its psychology maneuvering. The TIPS market measured against the central bank balance sheet expansion demonstrates, conclusively, that both are reacting to the same thing – massive shadow monetary destruction you don’t see.

When that happens, inflation expectations drop considerably (deflation) and the Fed plays its puppet show in response to little actual effect.

PELLEY: Has the Fed done all it can do?

This is true, but another lie (#3) if one of omission. The Fed can do a whole lot more but it will end up being just effective (see: Japan) as everything else it has undertaken so far. And, again, this doesn’t sound like a guy who’s confident in himself right now.

While everyone from goldbugs to cryptos to dip-buyers focused on that flood comment, the digital money printing, everyone ignored the only thing Powell said which was somewhat truthful.

POWELL. But I would just say this. In the long run, and even in the medium run, you wouldn’t want to bet against the American economy. This economy will recover. And that means people will go back to work. Unemployment will get back down. We’ll get through this. It may take a while. It may take a period of time. It could stretch through the end of next year. We really don’t know. We hope that it will be shorter than that, but no one really knows. [emphasis added]

See what I mean about leadership. The man is hedging his comments, offering up CYA since he realizes the situation is beyond extraordinary (his performance a key reason why). We’ve already had one severe disruption and if it takes to the end of next year (or the middle of next year; hell, even the end of this year) to really get up again and back to even there’s going to be a whole lot more financial chaos and long run damage along the way.

Unless he can convince you he’s got it all covered; that the Fed is competent and saw this coming therefore prepared for every eventuality and, more than that, they’ve got more left to spare in the toolkit. But in case it does go wrong, that’s on the record now, too. 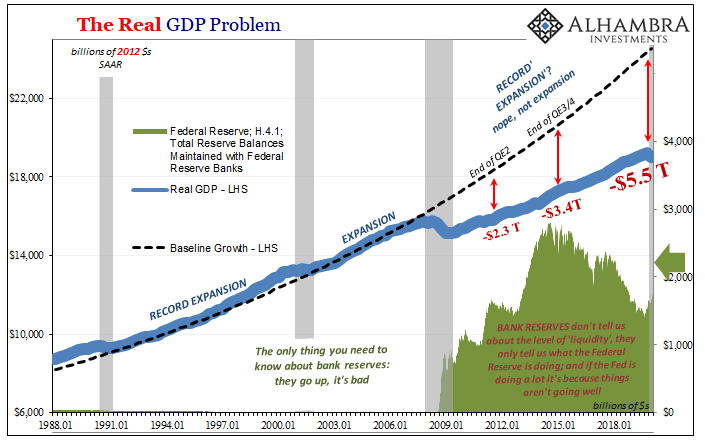 Back to even by the end of 2021 would be the equivalent of the US and global economy suffering a second Great “Recession” – as our best case. That’s not at all what the “V” people have in mind; but it sure is what the bond market is positioned for. Bonds actually have seen it coming.

Jay Powell says he wouldn’t want to bet against the American economy but because of people like him it’s been the best bet for more than a dozen years. Thus, the braggadocio posture. And the lies. All these outright lies. The telltale signs of a guy who finally figured out he’s in way over his head.