Despite what we’ve all been taught, and what gets reinforced in the media, it’s not really that difficult to get people to see the interest rate fallacy at least where it all starts. Central bankers say that low rates are stimulus when this runs contrary to every bit of historical experience as well as evidence. Yes, they are lying to you.

When you begin explaining how by first using government bonds, suddenly it does make a lot of sense. Demand for the safest and most liquid instruments would necessarily increase substantially during periods of illiquidity and monetary shortfalls. When you can’t rely on the system, you hold the most liquid reserves purposefully eschewing more illiquid forms of investing.

As a result, the price on this class of instruments goes up and yields down. Milton Friedman had to call mainstream convention an interest rate fallacy because Economists don’t understand nor want to understand bonds. They keep saying low rates are, again, stimulus. Nope. Falling and persistently lower yields tell you exactly when what Economists call “stimulus” thoroughly deserves the scare quotes.

OK, but what about riskier bonds? That’s a harder case to make because we intuitively conflate liquidity risk with credit risk. If the former is high, then who would want the latter, to take on credit risk?

As a consequence, low rates in, say, risky corporates are still associated with a potential credit bubble. What else could possibly drive their yields down? If risks are high liquidity-wise, rates on these things can’t go lower, can they?

Therefore, it may seem like the two are in conflict with each other – low rates in riskless assets indicating high liquidity preferences and failed monetary policies, but then low rates in risky assets like junk corporates suggesting the opposite, maybe even a credit bubble driven by an overly aggressive central bank.

The answer is actually incredibly simple, easy, and, unlike the central banker story, backed up by history and evidence. No credit bubble required, just central bankers who are really, really bad at their jobs.

We’ll start by going back into history and using a period absolutely no one would confuse with a credit bubble. Universally accepted as the exact opposite, this is our control. The Great Depression of the thirties.

The decade of the twenties, now they roared with all sorts of bubbles from money on out to the asset markets. There was massive monetary expansion (in the form of the deposit multiplier, but also in wholesale “borrowed reserves” as well as where all this money was funneled; up to NYC and call money or street loans). You can easily observe the effects of that bubble in factors like new securities being issued; how much and how many. 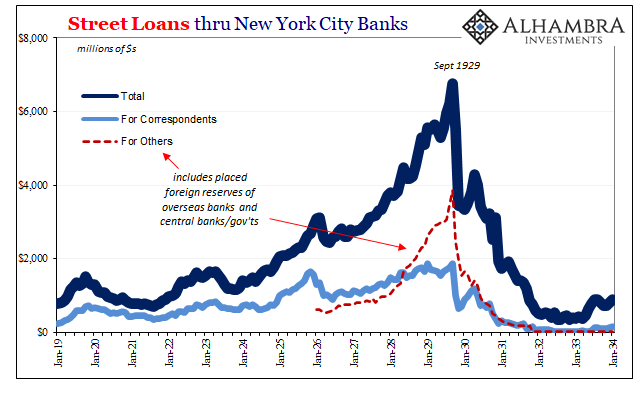 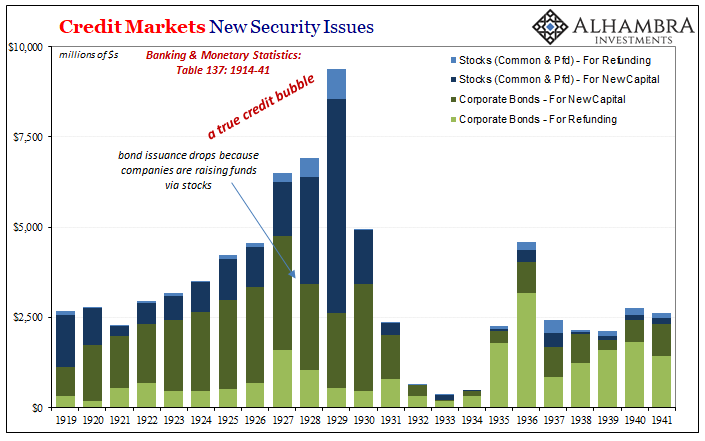 Building up somewhat slowly, it didn’t really get ridiculous until around 1928. But when it did, all those correspondent reserves flowing into NYC’s call money market (street loans) completely distorted every related market including bonds. In 1928 and 1929, bond issuance dropped substantially because companies were so easily raising funds issuing new shares.

But even when we remove stock issues from our examination, notice the tremendous difference pre- and post-contraction: 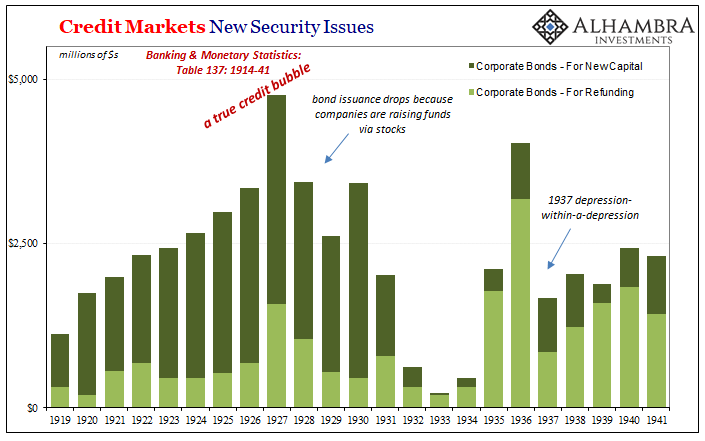 During the twenties, bond issuance flourished especially for what was classified as “new capital” (as opposed to “refunding”, which is when companies issue a new bond to replace one that matured or had been called/retired). As you would expect given the massive economic and monetary disaster of the Great Contraction (1930-32), new issuance ground to an almost complete halt at the bottom.

Then, consistent with the lingering depression, things had materially changed on the other side during “recovery.” Apart from 1936, bond issuance remained unusually subdued particularly when taking into account the prior trajectory/baseline put in place during the twenties. To be blunt – the bond market shrunk.

Not only that, the class of new issues came to be dominated by refunding rather than new capital. Clearly, not a credit bubble by any means. 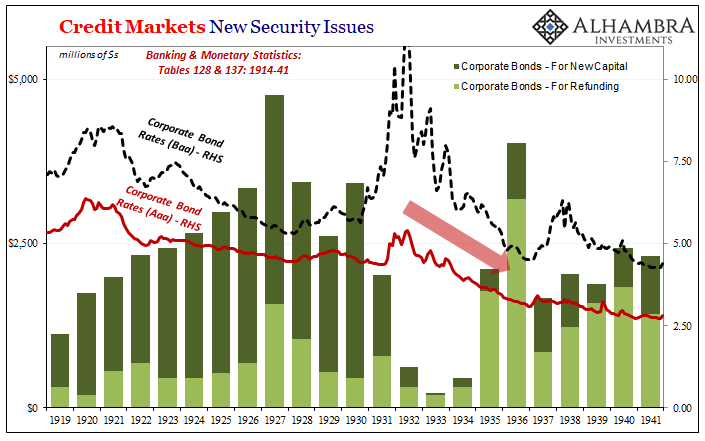 While it may then come as a surprise to most or all who follow central bankers and mainstream Economists, even though there was absolutely no credit bubble during the thirties, yields on riskier credits (and riskier corporate credits) declined throughout them. Just like Treasury yields.

In fact, the published benchmark of Baa-rated corporate credit was lower after 1935, on average, than it had been at the height of the bond bonanza in 1927.

How do we explain this? Again, it’s pretty simple: context. For one, and the reason I’m using new issues as a proxy for the bond market’s overall situation, there were fewer issuers in risk bonds following the crash than there had been before. Very simple, much less supply. Not only that, survivorship bias in what was left of supply.

The worst companies didn’t make it through the collapse, so even though bonds might’ve been rated still Baa they didn’t contain the same number or proportion of the worst cases and issuers. They were purged, long gone.

But more than that, we have to think larger than simply credit risk corporates. During times of systemic illiquidity, like the thirties or today, though they may be low-rated bonds they are still bonds. That means there must be, to some degree, a dependably liquid market for them (which is aided by the survivor bias).

Though they may be risky, they are market-able when compared to illiquid investments like loans or private placements. Alongside falling yields on the safest instruments, the fact that these things are still liquid instruments gives them a leg up on other forms that you don’t see because they don’t have a market – and therefore shrank even more than the bond market.

For the same potential credit risk during a time like this, assuming you were willing to make an investment would you loan a less-qualified company money or let them float a security through a market that still largely functions? Easy choice. If you think the monetary system is amiss, liquid, liquid, liquid. Even when “reaching for yield.” Bank lending disappears in favor of a smaller bond market.

The current analog situation is junk corporates, CLO’s, leveraged loans, and the like. Rates on these things have been falling because there is a credit bubble post-2008? No. Same situation as the thirties; CLO’s and securitized corporates are market-able (at least when they are acceptable in some form to be used backing repo).

What illiquid stuff disappeared was, oh yeah, subprime mortgages and mortgage loan pools. In other words, CLO’s haven’t signaled a credit bubble anew, they are a smaller subset that remains liquid replacing all that mortgage crap that no longer is. Thus, no credit bubble; at most, somewhat of a substitution consistent with liquidity preferences.

As my podcast co-host Emil Kalinowski likes to show, there are any number of data series and charts which conclusively illustrate how, like the thirties, credit markets post-contraction (2008, in this case) have been severely curtailed overall; when taking into account everything in them.

And while most people are led to believe that low, lower, and the lowest rates in especially junk credit means Fed-fueled bubble, they are actually consistent with the opposite case. The situation where the Fed doesn’t do its job, or even really know what its job is.

Worse, these idiots never learn a thing from history, recent and otherwise. Remember, Milton Friedman pointed this out, having to call on its fallacies, all the way back in 1967. Half a century ago. Have Economists learned anything? It’s a rhetorical question, obviously.

Here we are fifty-three years later and it’s still the same damn thing. That’s the corruption, this unbelievable level of central bank corruption. They still try to make you believe low rates are stimulus when, as Friedman said way back then, it runs precisely opposite to all the empirical facts. Even risky assets.

Low rates are not stimulus, they tell you the entire system wants to hold liquid stuff. Any liquid stuff. Realizing this, it isn’t that much of a leap to figure out why.