What Did Hamper Growth ‘In A Few Months’

What Did Hamper Growth ‘In A Few Months’

Over here, on the other side of that ocean, the US economy can only dream of the low levels Chinese industry has been putting up this late into 2020. At least those in the East are back positive year-over-year. Here in America, manufacturing and industry can’t even manage anything like a plus sign.

According to the Federal Reserve, the outfit which has kept tabs on this economic sector for more than a century, the economic rebound from 2020’s big collapse bent the wrong way around July and hasn’t yet been able to curve its way back in the good direction. Over the four months since, through November, IP has come back by just a little over 2%.

While a 6.7% annual rate sounds fantastic – given where things stood even before COVID – it isn’t near enough to make up for the almost 17% drop March and April. Because of the clear and sustained slowdown, IP in November 2020 remained a very recession-like 5.5% below where it had been in November 2019.

And, lest we forget, US industrial output in November 2019 was already a touch (-0.4%) less than it had been in November 2018. Landmines and their (ongoing) aftermath. 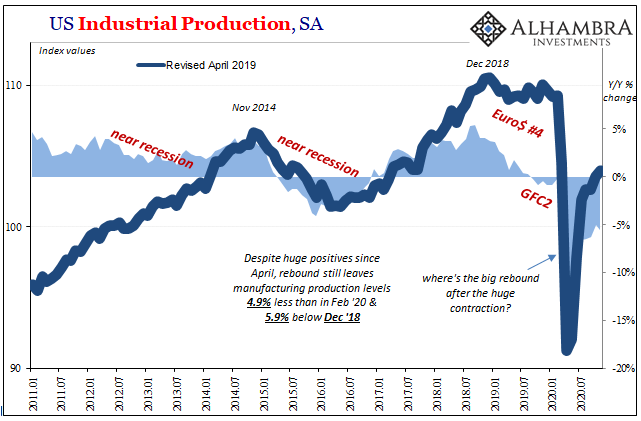 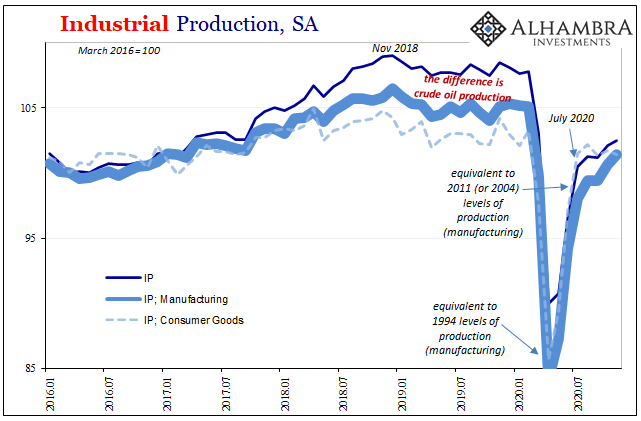 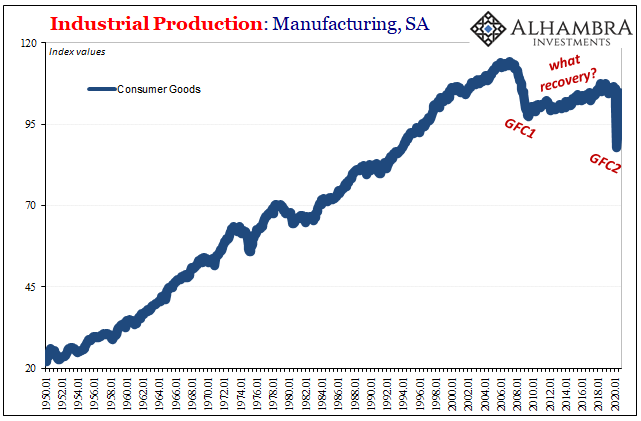 The implications, at least, are very simple and straightforward: as we’ve been saying since summer, the production side of the economy never bought the “V.” Largely because of this, this segment (which includes services; so much of the service sector is dedicated to managing, transporting, and selling what industry makes or extracts) hasn’t been hiring and rehiring near enough to create a recovery. Negative spillovers abounded.

Like the labor market, output isn’t even halfway. And that should boggle the mind given what would have happened if there had been a “V.” Economic activity beginning with industry should’ve not only rebounded to where it was prior in February (or November 2018, if we’re truly keeping score), it would’ve surged way above for at least a few months to make up for those when production was largely closed down.

In the immediate aftermath, during the reopening frenzy, that scenario had been somewhat plausible, at least for officials hoping to make the message reasonably saleable to the general public as a way to float as much optimism as humanly possible. Overall economy activity, including the labor market, came back really quickly in the initial stage (gigantic positives).

That all stopped, though, and for reasons that no one seems to want to venture an explanation. The “V” died and we’re left otherwise to believe that a resurgent COVID bug did the deed.

Nope. This thing turned, again, back in July for IP and in June for a lot of data including employment figures (and markets which sniffed it out in real-time). As gigantic as those positives had been, they actually weren’t near enough to convince economic actors (employers, consumers) to take on the risks a true recovery demands.

Neither was QE and all those government stipends pretending to be “stimulus.” Of the latter, such aid was legitimate and legitimately necessary given the situation. It wasn’t, however, going to be sufficient to bring about the “V”-shaped recovery.

Already the economy was put in a horrible position by GFC2; on top of what had been, at minimum, a manufacturing and industrial recession prior to this year which had been ongoing for a very long time (Euro$ #4). I wrote the following on March 26, the title all-too-accurate as it has turned out, if you’ll permit me the extent of the reminder:

See, that’s the thing about GFC1 and its Great “Recession.” The economic chain of causation isn’t the same this time versus that last time, but there’s that whole financial crisis which is turning out to be way too similar. In the long run it was the GFC rather than the G’R’ which spoiled any chance at real recovery…

Thus, the prospects for a quick and complete turnaround this time continue to dim the longer and the deeper GFC2 unnecessarily binds the whole global system. If Bernanke’s failure to stem and solve GFC1 ended up costing the labor market what you see above, just how much will Powell’s GFC2 end up destroying?

The Federal Reserve has shot all its bazookas, from endless QE to unlimited “repo” operations and finally overseas dollar swaps. Doomed to failure, all of it; the dollar swaps supposedly such a big piece aimed at fixing the global part of the dollar shortage have been open and operational this whole GFC2 just like GFC1. What good were they?

Once this thing is over, American workers need to realize…they’re going to get back to work more slowly and, unless something meaningful changes very soon, ultimately fewer of them will.

Add US industry to the already-lengthy list populated by a broad survey of wide-ranging data showing you that, yes, definitely more slowly, way too slowly, such that sadly fewer of displaced workers really will have their livelihoods restored. Vaccines won’t fix this. Nor is inflation coming out of it. 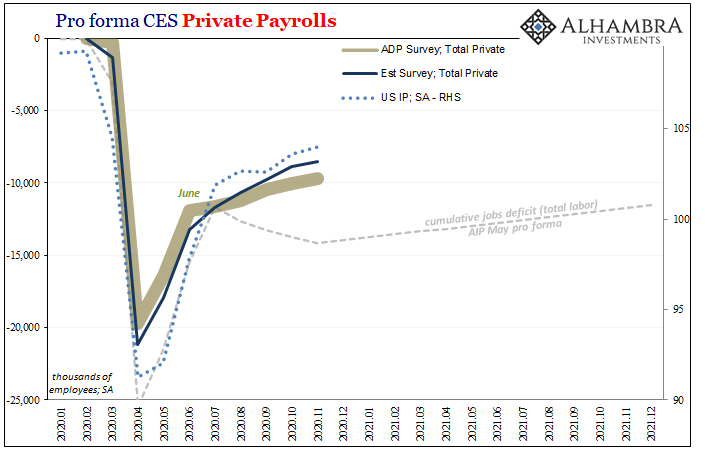 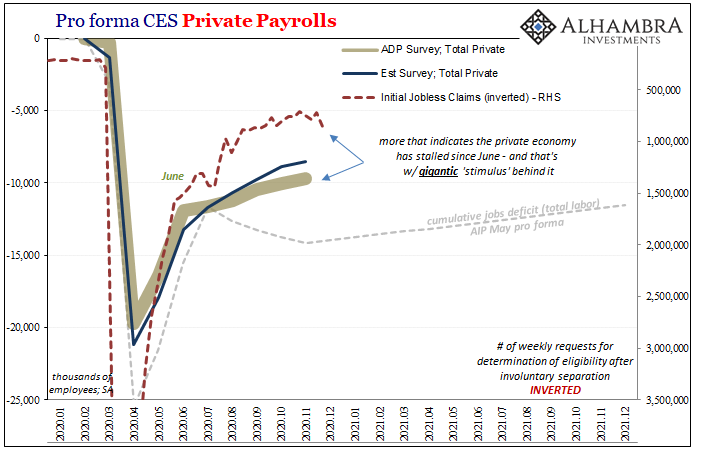 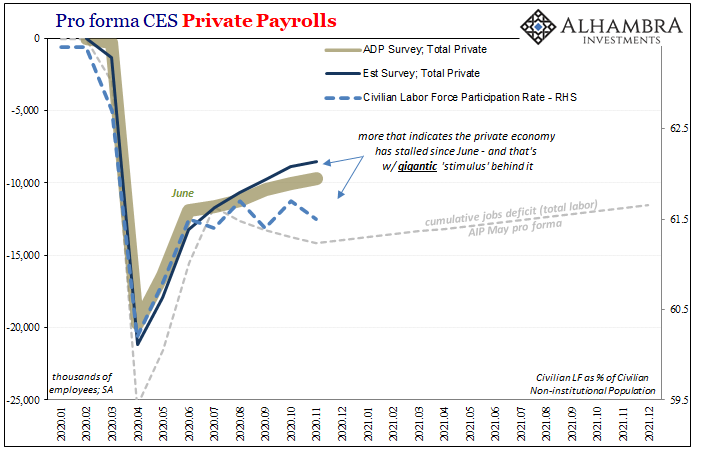