You’ve no doubt heard about the jobless claims number. At an incomprehensible 3.28 million Americans filing for unemployment for the first time, this level far exceeded the wildest expectations as the economic costs of the shutdown continue to come in far more like the worst case. And as bad as 3mm is, the real hidden number is likely much higher.

As next week’s tally will certainly be.

The dislocation is upon us, but that’s no longer our major concern. Having been left no chance to avoid one, the only issue now is how quickly we get out from under it. If 20 million American workers maybe more are dispatched to the unemployment line in the weeks ahead, how soon do we get them back to work?

Just as important, do they all get a chance to go back?

See, that’s the thing about GFC1 and its Great “Recession.” The economic chain of causation isn’t the same this time versus that last time, but there’s that whole financial crisis which is turning out to be way too similar. In the long run it was the GFC rather than the G’R’ which spoiled any chance at real recovery.

It was one of the very few things Ben Bernanke got right during his crisis tenure. In February of 2009, Senator Bob Corker asked then-Federal Reserve Chairman if we should all be worried about zombies. Would the US economy end up plagued by unproductive companies as Japan had been throughout its lost decade(s)?

No, said Bernanke. He’d fix the one thing that needed fixing the most:

We can lament that it is this way until the cows come home; the sad truth is that we live in a highly financialized, globalized economy. That kind of system absolutely requires monetary and financial growth in order to function. Without it, no growth and no chance to get back to where we had been before the “subprime” dislocation.

Without a stable financial system, or even the widespread appearance of stability in it, this is what happened to the suddenly jobless: 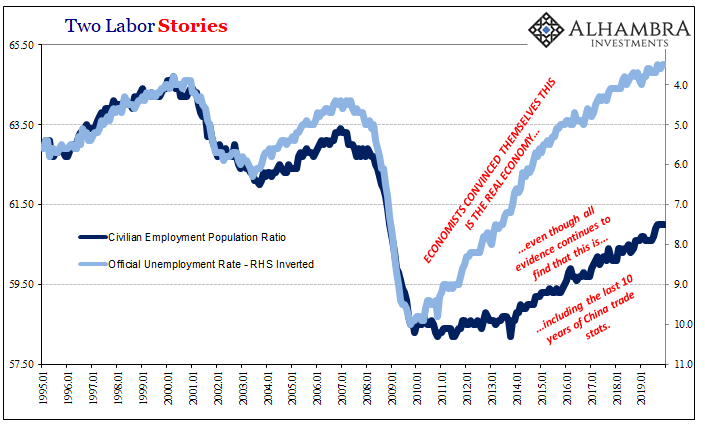 Like the undead themselves, they disappeared from the official unemployment statistics (the denominator) because they stopped looking for work they knew didn’t actually exist and wouldn’t show up (all the while Fed policymakers called them lazy drug addicts; R*). The US (and the rest of the global) economy still hasn’t worked its way out from under the labor costs produced by GFC1 even though it happened more than a decade ago!

Thus, the prospects for a quick and complete turnaround this time continue to dim the longer and the deeper GFC2 unnecessarily binds the whole global system. If Bernanke’s failure to stem and solve GFC1 ended up costing the labor market what you see above, just how much will Powell’s GFC2 end up destroying?

The Federal Reserve has shot all its bazookas, from endless QE to unlimited “repo” operations and finally overseas dollar swaps. Doomed to failure, all of it; the dollar swaps supposedly such a big piece aimed at fixing the global part of the dollar shortage have been open and operational this whole GFC2 just like GFC1. What good were they?

Despite (or maybe because of) Jay Powell’s claims of boldness, the world’s dollar (and related collateral) problems haven’t budged. If anything, this week while stocks are bouncing (dip buyers are a determined bunch of FOMOs) the global dollar shortage goes nuclear.

Three-month LIBOR jumped more than 10 bps yesterday, while fed funds, repo, and LIBOR’s rejected replacement SOFR all went further downward; according to FRBNY, which is responsible for calculating the reject, SOFR is an outwardly pleasant 0.1%.

And that can only mean big trouble down in the shadows. 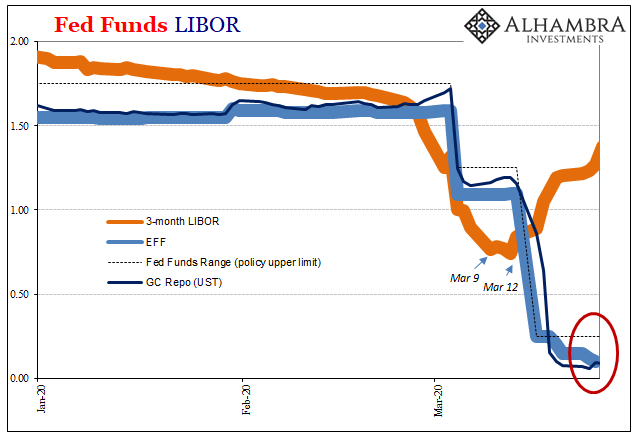 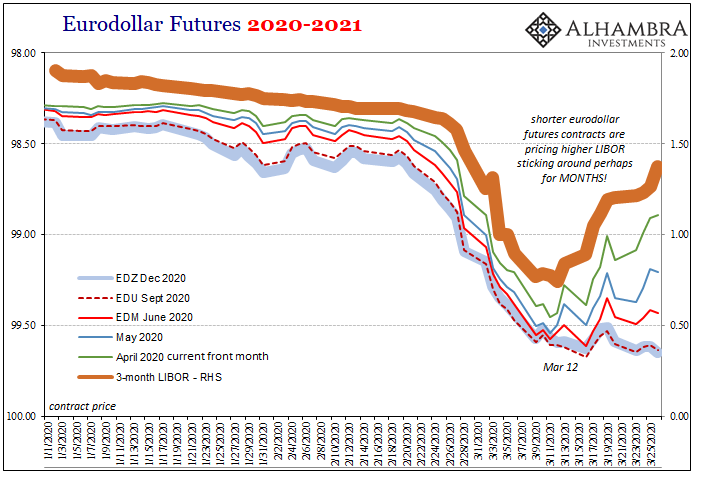 This actually explains both ends of the eurodollar futures (and yield) curve; the front of it is being sold as the market continues to expect no effective aid from the central bank – any central bank – on the monetary front. Total impotence; inelasticity is being priced for potentially months.

The long end of the curve therefore trades ahead of what will be lower and lower 3-month LIBOR further and further out into the future. That can only mean a recovery that isn’t much like one; the unnecessary further damage being done by a monetary and financial system central bankers are criminally unsuited to solve is adding up more and more to bleak, Japan-like forward prospects.

More so than the last twelve years have been!

How happy is Janet Yellen right now? She’ll be completely forgotten, her sorry tenure erased being bookended by the two bozos, history left to argue over who was worse, Bernanke or Powell. In the end, it will be Powell because he at least had Bernanke’s mistakes from which to have learned a thing or two before GFC2 was ever made a reality.

Starting with: LISTEN TO THE EURODOLLAR FUTURES MARKET!

Back last June, the curve had inverted by more than it had on August 9, 2007 – the very day GFC1 began. This market was warning the world that the global monetary situation had become so precarious, the system so frail, that it was in real danger of being pushed over the edge.

What if I told you that today the curve front to June 2020 was already inverted by 76 bps?

Not just rate cut, whole series of them! pic.twitter.com/TsIutHsYJu

It didn’t matter that no one could have predicted the coronavirus outbreak and what governments would do in response to it; that’s not what the market was saying or focused on last year. What it might be didn’t matter. It was telling everyone that the system was in such poor shape, so incredibly fragile that any further substantially negative pressure could easily push it into a crisis.

If not COVID-19 then something else.

Like policymakers twelve years before, policymakers last year and this year won’t listen. They’ve turned 2020 into 2008; literally, in the case of the monetary policy response because, quite frankly, they just don’t know what else to do.

Ben Bernanke was right, and being right only about this one thing should haunt him forever. We have to have a working monetary system, else there won’t be enough recovery momentum because there can’t be enough. The eurodollar futures market isn’t pricing the surreal surge in jobless claims, it’s trading as if Powell and Bernanke are exactly the same and therefore preparing for that part of history, the worst part, to repeat itself.

Once this thing is over, American workers need to realize, as eurodollar futures investors do, that they’re going to get back to work more slowly and, unless something meaningful changes very soon, ultimately fewer of them will.

Fed launches and EVERYTHING* QE, the holiest of the holy purchase plans. Puts the ooh in bazooka.