Why *Only* That Specific One?

Why *Only* That Specific One?

On February 23, the US Treasury sold off $60 billion and change of 2-year notes (CUSIP 91282CBN0). This particular shorter-term instrument has been in the crosshairs of the reflation trade, lurching in and out of it going back to last October, perhaps even late September. Caught up being the immediate tenor following the bills which have been bid (for “some” reason) and longer-term notes and bonds which are more reflation sensitive, the yield on the 2s has been yo-yoing back and forth between 10 bps and as much as 19 bp for more than half a year.

Notwithstanding such volatility, and with reflation having ignited more completely since early January, Janet Yellen’s Department had no trouble whatsoever floating the allotment. For the $60 billion offered, $146.3 billion in bids came in producing a high auction award of 11.9 bps yield (media 9.8 bps) given a secondary market pricing of 11 bps (and change) for five days running beforehand.

That worked out to an uninteresting, uncontroversial bid-to-cover ratio of 2.44, well within the established trend going back to December 2019. For that reason, along with the less reflation-y view of the world taken from the proximity to bill yields, the auction parameters for these 2s were records (low yields). 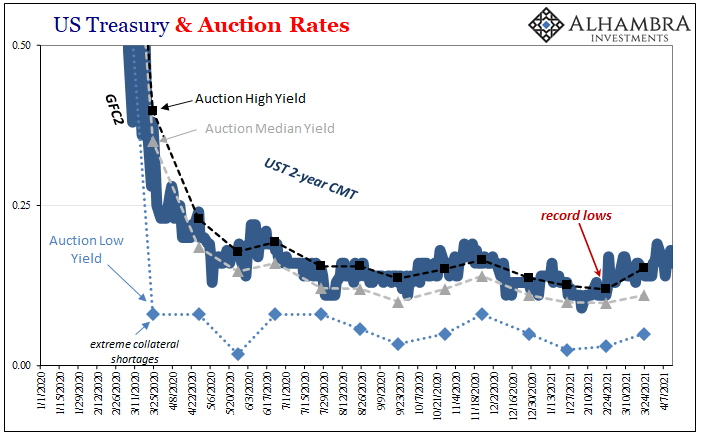 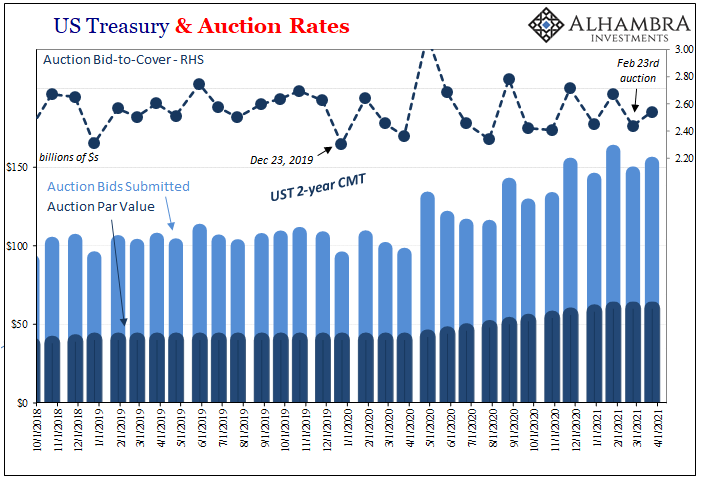 Two days later, the secondary market price for 2s suddenly plummeted; the yield spiking from around 11 bps to a touch higher than 17 bps on the 25th.

It wasn’t just the 2-year notes which fell under broad selling discretion; the entire Treasury market from just beyond the bills to the long bond suffered a material dislocation that, of course, triggered the usual finger pointing. It had to have been reflation, a growing mainstream premise that even bonds can no longer deny how governments and central banks shifted risks in an entirely new direction toward perhaps having committed “too much.”

Possibly, but why hadn’t that view been expressed just two days before when those brand-new 2-year notes issued under such high demand?

The obvious blame fell on the 7-year note which unlike its counterpart closer to bills had suffered a “terrible” auction on the 25th – the day of the selloff. The numbers do appear to back up the description: the high accepted yield was 1.195%, way, way above the 1.02% recorded by Treasury for the secondary market close the day before (Feb 24). More than that, with $62 billion being offered Treasury received “only” $126.8 billion in private bids.

The bid-to-cover had tumbled to just 2.045, which was its lowest on record. 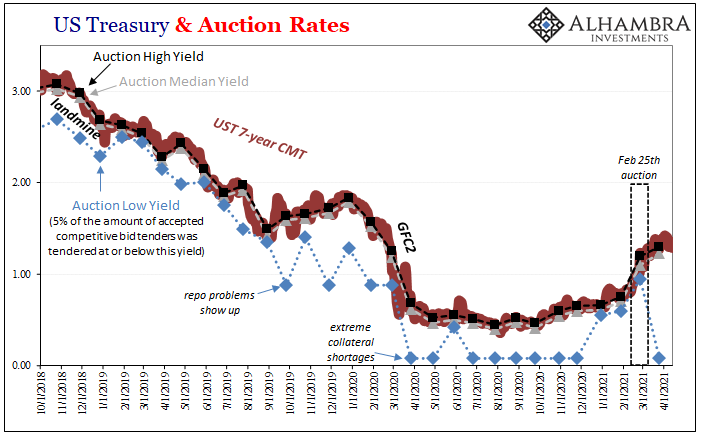 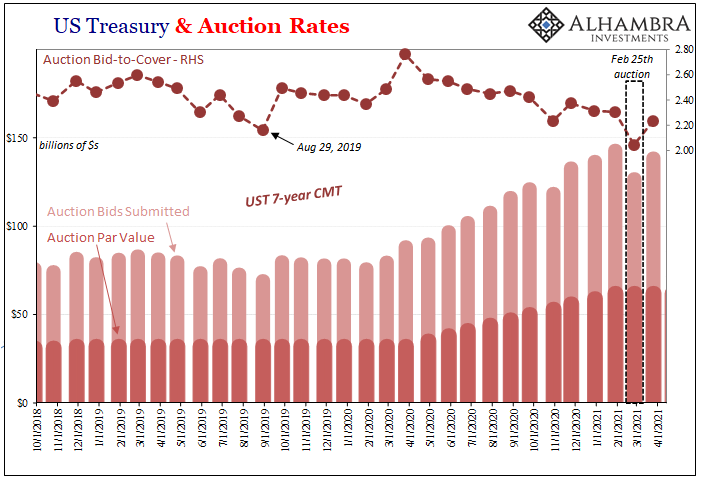 Even the auction’s low accepted yield spiked to 95 bps, the narrowest range for bids this maturity had seen since early 2019. In other words, there wasn’t the usual overbidding at huge premiums on February 25 like there had been certainly throughout 2019 and 2020.

All that would have been consistent with rising inflation fears.

However, in the meantime Treasury has auctioned off another round of 7s, this sale on March 25. Unlike the previous one, the latest went off without incident. Like before, another $62 billion offered only in late March $138.5 billion in overall (private) bids for a much better bid-to-cover of 2.233; still a touch low but not unusually so and nearly right on the recent declining trend.

In other words, the February 25 7-year auction sticks out like a sore thumb. There’s not been another like it – and not just for the 7s. Go to the 10-year benchmark, for example, like the 2s shown above every single one of its recent auctions has been on-the-screws in every way imaginable: 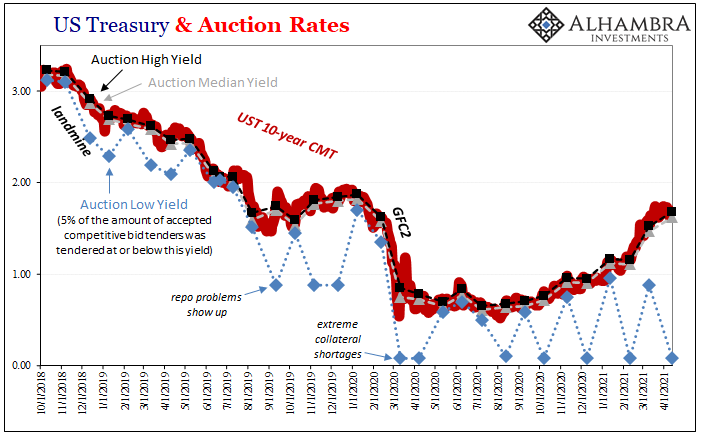 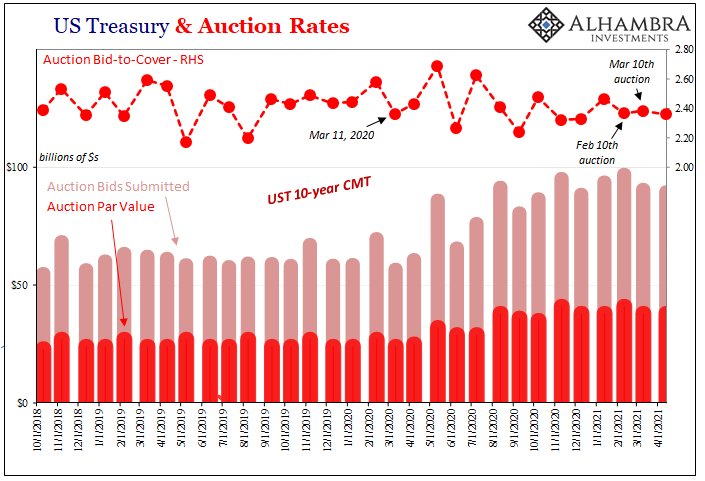 This has been true at auctions held both before the awful 7s on February 25, as well as the last two, the first of those concluded on March 10 and then the latest pulled off just yesterday (April 13). Up and down the yield curve, what we find is that Treasury auctions have been absolutely fine except that one. Not specific maturity, specific auction specifically on that specific day.

What must have been so special and unique about this isolated case it all went so badly? In this one instance, a little more than $16 billion in bids (at the low end yields, meaning highest prices) disappeared when compared to the 7s auction of January 28, about 12%.

Given that dealers are typically those in highest demand and therefore responsible for most if not all the high prices and lowest awarded yields, it’s reasonable to further question why dealers seem to have shirked a substantial chunk of their otherwise normal capacities on only February 25.

Remember, two days before, February 23, the 2-year auction had gone off at record parameters despite also having been conducted right in the middle of the same reflation-mania. And the 2s are highly susceptible to volatility.

The only thing that stands out which might, could be able to explain such a drastic difference in a matter of days is if there had been some disturbance between those two auctions ultimately restricting dealer demand or perhaps capacities to engage in usual functions at typical levels.

Fedwire, however, could [explain this] – starting with the absence of dealers on this particular day in question.

The interbank payment disruption itself wasn’t really that big of a deal. But, just like September 2019 repo, it exposed serious, unresolved cracks in the façade, reminding the global system that it is held together still today by a very fragile framework where, again like 2019, when something unanticipated happens the dealers ungracefully exit and leave liquidity to its own spotty devices.

Backed up by the previous day’s unsettled Fedwire transactions, dealers (somewhat) sat out the 7s and the rest is (short run) history.

It’s just not likely at all that reflation or better yet outright inflation fears had spiked the 7-year note auction – and only that Feb 25 note auction. Why just that one, and no others? The very debt sale which just so happened to come immediately after an interruption in the monetary plumbing (accidental or not doesn’t matter) almost certainly backing up processing therefore curtailing balance sheet formalities – like being assured of being able to bid at full capacity at the next day’s big 7-year note-fest.

Reflation is not, nor could it ever be, so obviously fickle targeted to disrupt only a solitary instance. Then there’s all the rest relating to the global marketplace which over the next few days transitioned itself out of reflation entirely (including, importantly, TIPS real yields!) 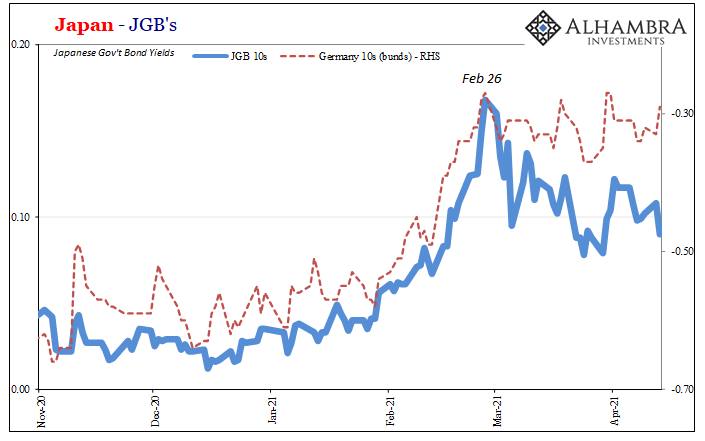 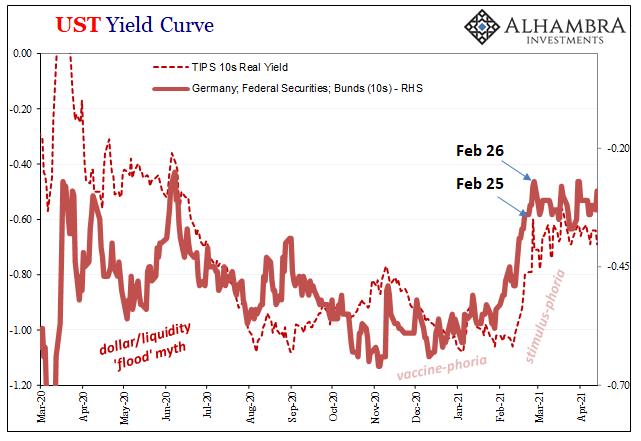 What we know for certain is that the 7-year auction on February 25 went very poorly, but that it was the only which has. Just two days before, the volatile 2s got issued without so much as a sniff or notice of trouble. Dealers aplenty. And all the auctions since have been absolutely unremarkable in every possible way.

There’s just no way to legitimately square the evidently intrusive events on February 25, and all the global chart changes which have accompanied it, with the idea that global bonds, Treasuries most of all, have been overtaken by the pure optimism thrown around casually. Inflation surely cometh – but only for the 7s on the 25th of February!

Why does any of this matter?

That UST selloff wasn’t reflation – it was illiquidity at perhaps the worst possible moment. And, I think, it shows just how fragile the underlying situation really is: everything going right except this one [Fedwire Feb 24] seemingly teeny, tiny thing. But that’s the point; appearing to be nothing, like Mandelbrot warned, how quickly it spiraled into “something.” A globe-trotting something.

It may not end up meaning much for more than the past seven weeks, a short-term interruption eventually forgotten. Then again, when the herd turns, global reflation fragile as it always is (that’s why it is reflation and not recovery), we have to keep a close eye on the potential for more than a short run curiosity. Curves remain low and flat for very good (meaning not good) reasons.

To put it into 2017 terms, the curves/global markets are pricing the chances of something going wrong to be much, much higher than everything going right. Sour, not soar. That’s how despite vaccines, Uncle Sam, TGA, bank reserves, etc. etc., global bonds have moved so comparatively little, thoroughly unimpressed no matter how many thirteen-digit programs applauded even feared (inflation-wise) in all the mainstream.

Unlike most, they’re at least aware of, and wary about, the rippling implications for what really must have happened late in February. 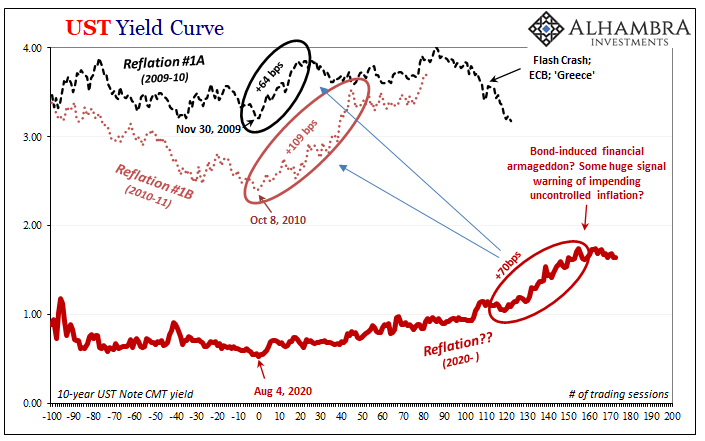 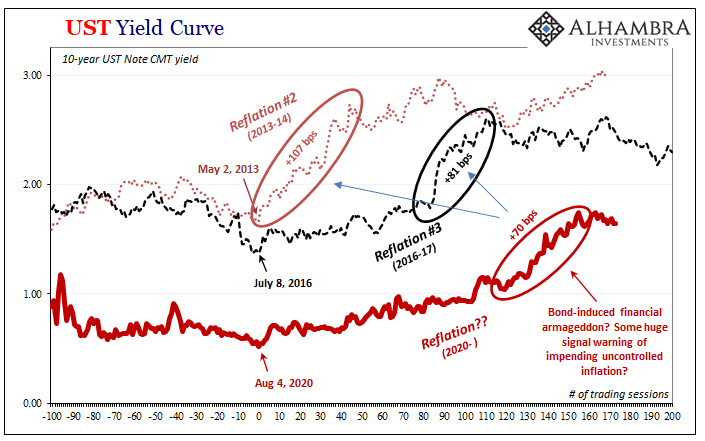 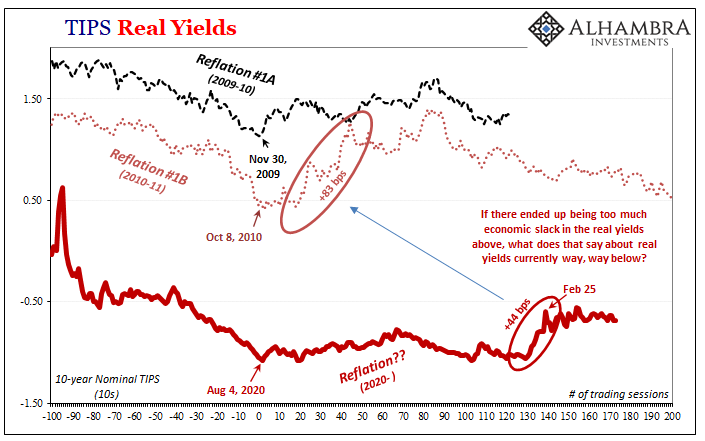 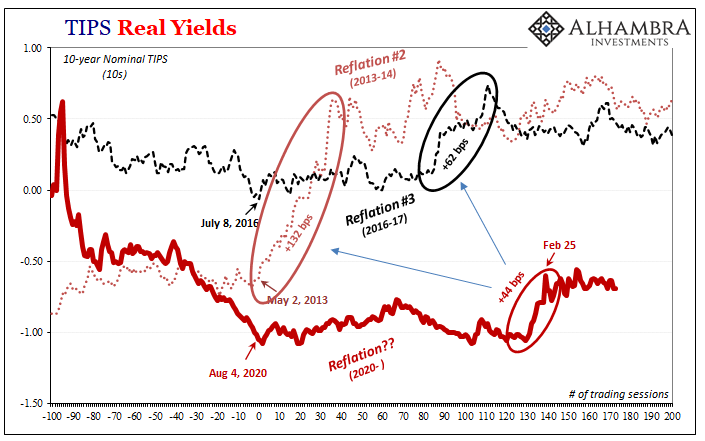 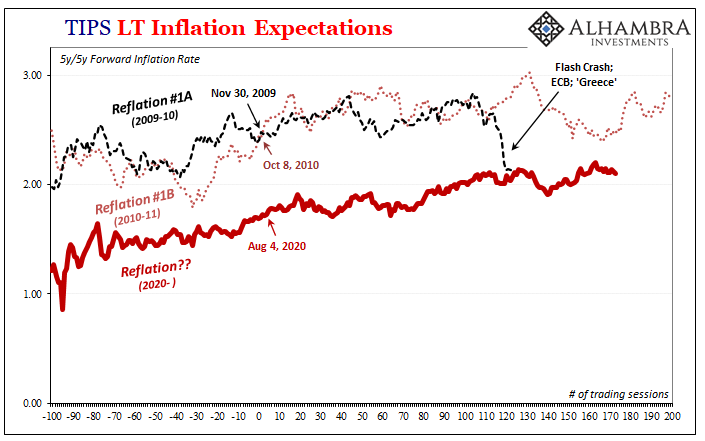 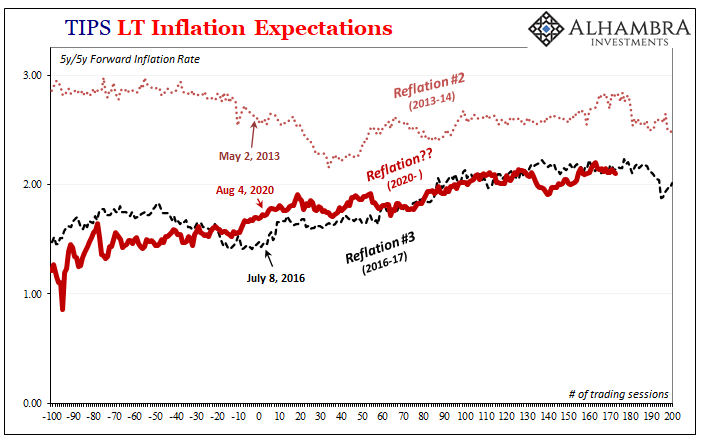