Valentine’s Day, and no one would love the US dollar. There was, instead, quite a lot of disdain for it fueling the usual loud voices who continue to hate it and predict its imminent demise year after year. This particularly lovely day in February 2018 seemed to have added more to the downside cheerleading; the US PPI came in red hot just in time for Cupid.

Inflation, they said, was right around the corner and this just wouldn’t be good for the beleaguered greenback.

The dollar fell across the board. “Forex markets rotate from theme to theme all the time. The theme right now is global growth and strong global growth has historically pushed the dollar lower,” said Greg Anderson, global head of FX strategy at BMO Capital Markets in New York.

Except, at that very moment the regime was already shifting. From February to mid-April 2018, the dollar’s exchange value halted its “plummet” and then confounded everyone by lurching upward for months (years, really) thereafter.

Caught completely off guard, strategists and Economists alike were at a loss to explain their currency loss. Must be the Fed!

According to the cultish mainstream worldview, it can only ever be the Fed in whichever way anything goes. The dollar which lost exchange value throughout 2017, just the year before, this was because, we were told, the Federal Reserve’s QE’s along with others around the world had created globally synchronized growth, a like condition to “historically pushed the dollar lower.” 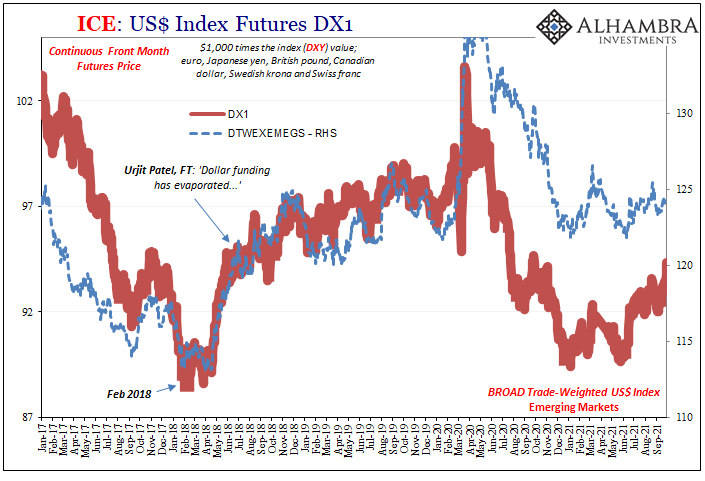 But now, a few months into 2018, the dollar’s going up and then we’re told a very different story: it has to be due to the now “hawkish” central bank trying to head off the very same inflation globally synchronized growth would necessarily produce. By May:

The dollar hit its highest level against a basket of currencies so far in 2018 as investors increased bets that rising interest rates in the United States would boost the greenback, while traders unwound their bearish positions on the currency.

So, the Fed apparently pushed the dollar down (which, by the way, was exactly what the early QE’s were supposed to have done – but never did) leading to the same Fed pushing it back up with faster rate hikes forced on it by the very successes of those QE’s.

This thinking may be circular but it is far from logical.

Some very big and disruptive clues began to trickle back into the frame already by this point in the dollar’s upward swing. Like 2013 and 2014, expectations for global growth were sky high but emerging market economies – who would have been the primary beneficiaries of real global growth – were being absolutely pummeled instead, their own currencies devastated by the sudden revival of King (Kong) Dollar “no one” saw coming.

In early June, India’s top central banker at the time would even go so far as to write an op-ed in the Financial Times pleading for those at the Federal Reserve to understand the situation. Urjit Patel would get all the causes wrong, a full member of the cult, but there was no denying the clear effects of whatever was wrecking things in his neighborhood:

Dollar funding has evaporated, notably from sovereign debt markets. Emerging markets have witnessed a sharp reversal of foreign capital flows over the past six weeks, often exceeding $5bn a week. As a result, emerging market bonds and currencies have fallen in value. 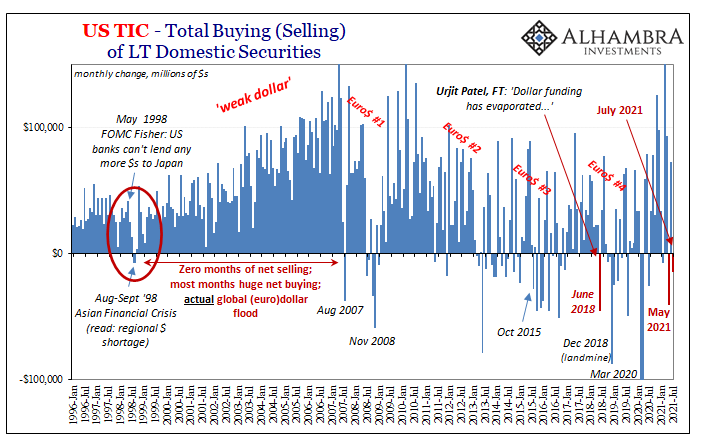 “Dollar funding has evaporated.” That can’t be the Fed, but it is always found whenever and wherever the dollar goes up.

It really wasn’t hard to see the differences (check the TIC), as I wrote in response to Dr. Patel’s gross misdiagnosis:

What’s going on here is a “double whammy”, alright, just not the one Economists in their ongoing monetary blindness refuse to reconsider. The global economy, contrary to their assessments, is not picking up, rather there are growing signs that after substantially underperforming last year it may already be rolling over this year and doing so from a relatively lower ceiling (compared to 2014, 2012, and 2007).

That might further propose the other part, where global eurodollar banks (especially in Europe) who had dipped their toes back in the “dollar” funding business under the “reflation” sentiment of the past two years or so are suddenly reluctant to expand on it, and after April 18 may actively be pulling back from it – refusing to take advantage of what may seem like tremendous profit opportunities that in a more realistic light appear to be only massive risks.

Spot on, as it would turn out.

But when the Fed started cutting rates with bond yields already tanking in 2019 as a consequence of everything policymakers get wrong, starting with dollar shortage, the currency’s exchange value never fell. Instead, the global situation only grew worse, putting many parts of the global economy right into recession long before COVID. It wasn’t the Fed nor interest rates, after all. 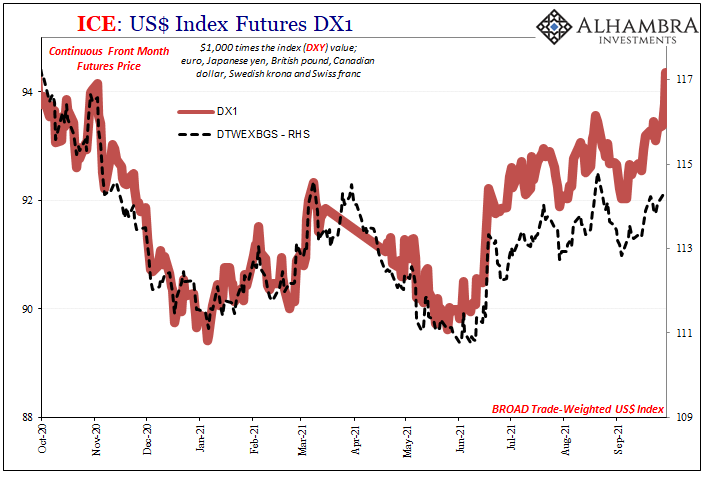 The dollar, you may have noticed, in September 2021 it is back on the rise. According to the widely-watched main index, DXY, it’s now the highest since last fall. Whether or not this will mean the currency rampages remains yet to be seen this year. There are alarming signs around the world, many written in their native Chinese (see: below).

As the dollar’s exchange value goes up and further defies all the predictions agreed upon by currency “experts” in late 2020 calling for its continued downward collapse all throughout 2021, once again the Federal Reserve will be suggested as the reason for its opposite direction – tapering QE in a few months before beginning, all over again, more “rate hikes” at some point next year (assuming they get that far). 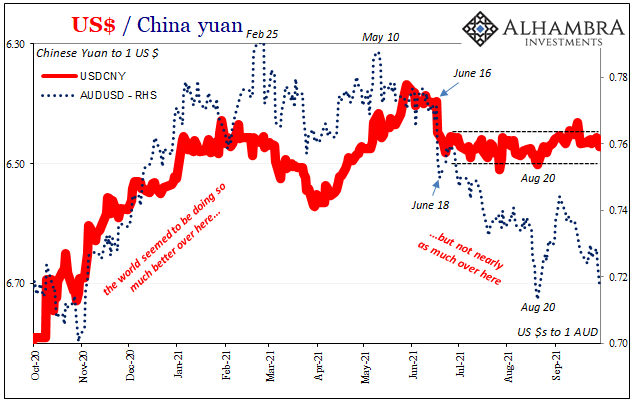 Even more to the point, though it may not seem so right away, the one currency which isn’t falling to the dollar’s bull at the moment is a really big one. China’s yuan continues to trade in a narrow sideways range which is contrary to reassuring or reflationary. There’s so much potential being wound up into this, what can only be stealth activity; the same potential as Patel’s.

On the contrary, sideways CNY like in 2015 and Euro$ #3’s growing pain is an indication of the very same thing India’s Urjit was describing just a few years later on the downswing arrival of Euro$ #4.

So, while some modest optimism builds in global bond yields right now – just like early 2018 – whether due to regular seasonality or something more substantial, this rising dollar is a big and misunderstood red flag. It’s easy to blame “tightening” monetary policies for it, like we are told to do every time we do this, and it’s still the wrong thing verdict.

They keep making the same mistake because no one is ever made to explain why they got the dollar’s crash, imminent inflation, and ultimately the whole global economic situation wrong the last time (like the time before and then the time before that).

Federal Reserve policy is money-less, therefore it’s always, “Dollar funding has evaporated.” Evaporated is, right now, too strong a word at the close of Q3 2021, but that is the direction the monetary system seems to be headed. And so is a whole bunch of the same bull. 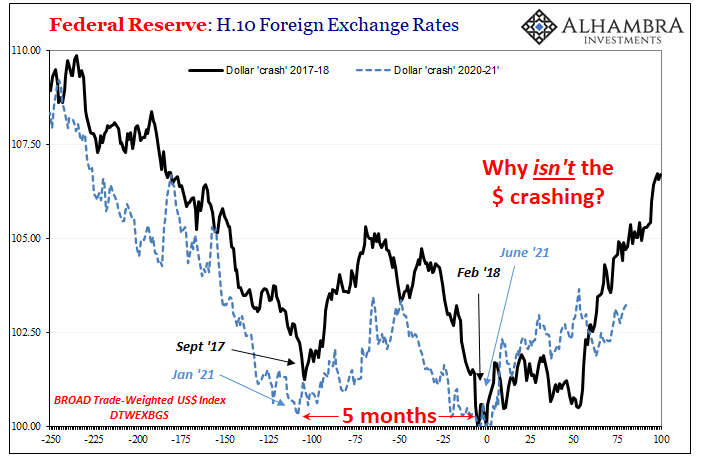 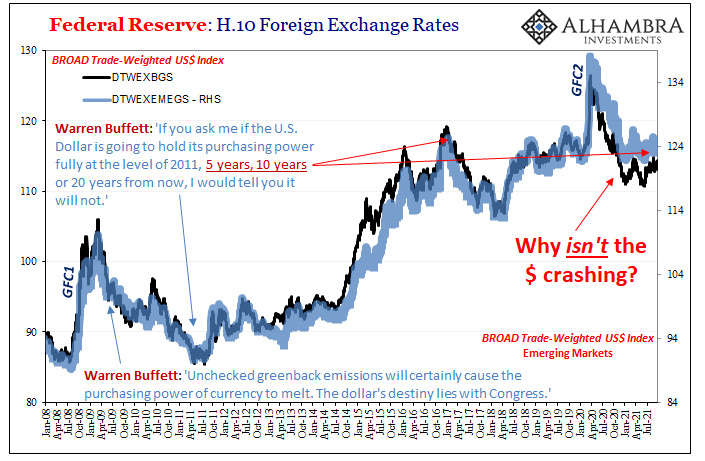