I quoted Janet Yellen’s statement from her first press conference yesterday, but it bears repeating:

These sizable and still increasing holdings will continue to put downward pressure on longer‐term interest rates, support mortgage markets, and make financial conditions more accommodative, helping to support job creation and a return of inflation to the committee’s objective.

We saw new home construction data this week that contradicts the idea that current monetary policy has and will “support mortgage markets”, now we have data from the National Association of Realtors (the trade group that has a vested interest in seeing 2005 return again) that shows home sales are in the same downward pattern as construction. The pace of existing home sales fell to the slowest pace since July 2012. 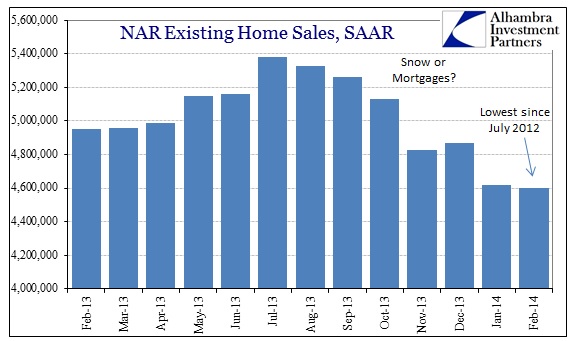 As per usual, orthodox sentiment tends toward snowflake mysticism, but now at least that is accompanied by the idea that the disaster in mortgage finance may be a contributing factor. With the lag time in the process of originating mortgage applications until actual financing the closing, there is no mystery as to why the pace started to decelerate exactly a couple of months after the worst of the credit selloff (precipitated by the FOMC itself).

Mortgage rates rose to their highest average in August, initiating the steepest drop in applications, so, again, it makes sense that the sales pace would decline precipitously in November and thereafter. Further, despite Yellen’s protestations otherwise, there is a growing sense that the labor market is not helping at all here. You have to unpack the inference from the FOMC-type optimism, but NAR’s chief “economist” Larry Yun pronounced, “With an expected pickup in job creation, home sales should trend up modestly over the course of the year.”

In other words, if job growth wasn’t as bad now Yun wouldn’t need to single it out as a potential cause for a turnaround, though we know how those orthodox predictions turn out. Second to that, NAR’s president, Steve Brown, cites increasing credit difficulties among the first-time buyer cohort.

“The biggest problems for first-time buyers are tight credit and limited inventory in the lower price ranges,” he said. “However, 20 percent of buyers under the age of 33, the prime group of first-time buyers, delayed their purchase because of outstanding debt. In our recent consumer survey, 56 percent of younger buyers who took longer to save for a downpayment identified student debt as the biggest obstacle.”

Again, the implications are clear here, if thinly veiled – student debt would only be an impediment to home purchase if incomes were insufficient to service both it and a modest mortgage. Job growth of a real recovery, featuring actual wage and employment growth (as opposed to bent statistics), would remove much of that inhibition. But in the meantime, we are left with one bubble (student loans) getting in the way of another (the housing mini-bubble) from maintaining itself. If there wasn’t such dramatic economic failure all around you might appreciate that irony.

Satire or not, the net effect on home sales and housing, thus of monetary “support mortgage markets” is that same bifurcation evident in almost every aspect of the US economy today. Anyone close to asset inflation is in bewilderment of the possibility that the economy is more than substandard, perhaps explaining the durability of the appeal of the winter “explanation.” 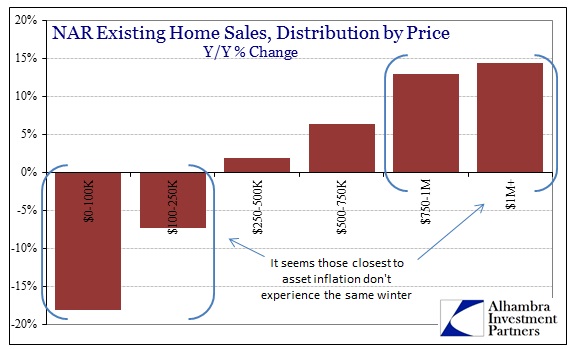 Redistribution is exactly as it sounds, except the FOMC actively sought it out in both consumer and asset inflation thinking that would create a new kind of “trickle down.” Orthodox economists are loathe to admit it, should they ever be forced to, but this is very much a “modern” distillation of an ages-old Marxist philosophical strain of both “rent theory” and a misunderstanding of the nature of savings. There is no path to universal and enduring prosperity by making the “rich” spend more since that effort, at the very same time, affects the lower income tiers disproportionately and inversely. Unfortunately, those on the “wrong” side of this redistribution scheme drastically outnumber those on the “right” side, thus ensuring that the net result is a slow and painful deterioration.