The Inconvenient Marriage of Yuan and Gold

The Inconvenient Marriage of Yuan and Gold

The latest money growth figures from China seemed to have brought back worries over more disorder in finance. Tomorrow the Chinese government will release GDP figures for the first quarter and current expectations (I know) are for 7.3% Y/Y growth. That would be the slowest rate of expansion in memory. The two are inextricably linked as slowing growth, including the export engine, means more turbulence in debt markets, particularly high yield obligors that are already stuck in a precarious position.

Total Social Financing rebounded in March to CNY 2.07 trillion, up sharply from February. But February was clearly distorted by seasonality and the timing of the New Year holiday as January’s TSF figure was above CNY 2.5 trillion, so altogether in the first quarter TSF only totaled CNY 5.6 trillion. That translates into an obviously slowing growth rate, thus the M2 estimates are incorporated into those worries.

Furthermore, these figures understate the shift that took place in the first three months of this year. Shadow conduits had been responsible for between 40% and 50% of loan and lending growth for much of the past two and a half years. Non-bank or off-balance sheet lending in February was only 17% of the total (I have not found any estimates for March yet), meaning that weak credit was partially offset by an increase in traditional bank lending. Can that continue?

I think certain parts of the Chinese financing and funding “markets” are increasingly unsure. The dollar/yuan nexus is somewhat beyond the ability of the PBOC to control order, as the recent yuan devaluation and copper crush make clear. In the wake of the money supply numbers copper and yuan have sold off noticeably against the dollar. 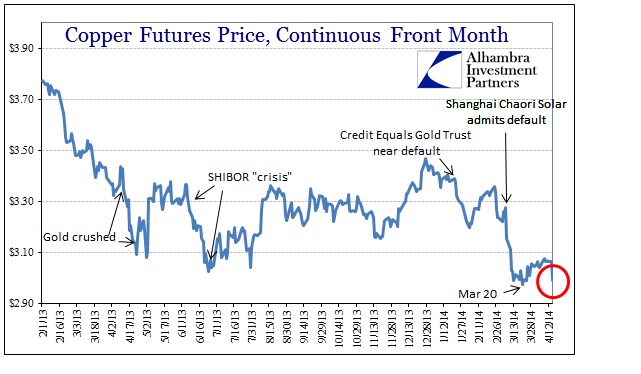 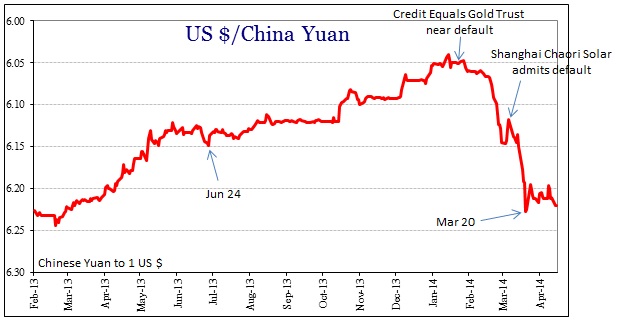 While these moves are not anything close to the extreme volatility from February and March, it still indicates, to me, dollar wariness. I believe that extends further into gold, for various reasons, but there is no clear and evident indication confirming that. 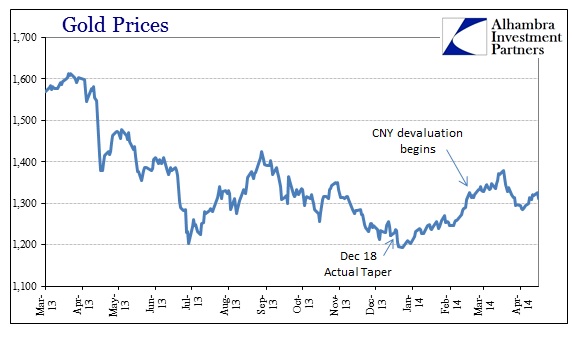 Gold has struggled for nearly a full month after seemingly, and finally, attracting its primary safety bid in full view of QE taper. I questioned this dynamic back in mid-March just as gold was beginning to reverse:

With Chinese dollar shorts in clear dysfunction, there may be further gold spillover ahead, particularly as copper gets hammered. Will the safety bid under gold, evident since QE taper, be enough to offset some or all of this copper/China mess?

To this point the answer appears to be “no.” Again, there isn’t an obvious direct link here that proves this association, but there is more than enough circumstantial and indirect features (particularly the function of global dollar markets) to make this theory compelling. That would tie together, unfortunately, ongoing Chinese financial worries to gold prices.

The only break for gold is the “tail risk” and safety bid, but it needs to be in enough proportion to overcome this persistent and moving drag of dollar financing collateral. Here too we see the unfortunate ties to central banks, as far too many are still beguiled by monetarism’s “growth story.”

For its part, the PBOC maintains a carefully optimistic outlook of credit and money growth. Speaking last week, PBOC governor Zhou Xiaochuan was questioned about the unique element of the Chinese arrangement whereby the PBOC is officially part of the government (not that it makes functional difference, “independence” of Western and Japanese central banks counts for very little these days). His quoted response made me wonder if something was amiss in the translation as it appears to be a startling admission.

“If the central bank is not a part of the government, it is not efficient in coordinating policies to push forward reforms,” [Zhou] said.

“Our choice has its own rational reasons behind it. But this choice also has its costs. For example, whether we can efficiently cope with asset bubbles and inflation is questionable.”

That last sentence sound suspiciously like CYA. Don’t blame us when it all falls apart? It certainly contradicts the mainstream assessment of near-perfect sagacity, conforming instead far more closely to what I believe to be the real extent of central bank reach.