Everyone went dovish after what happened in December. Convention assumes that central bankers take their cues from the NYSE. I don’t think that’s what shook everyone up, though. Curves, ladies and gentlemen. The bond market revolted and the stock market showed serious signs of catching its contagion.

Since the mainstream had been expecting a booming economy, because that is what every Economist has been saying, this was all very shocking. As was, quite naturally, the blind groping for answers. How could this have happened?

Since convention also assumes central banks are at the center of everything, they must’ve taken away too much punch from the bowl. It was the Fed’s fault for both raising rates too high while simultaneously normalizing its balance sheet. Nobody really knows what that last one means, but people call it quantitative tightening so it must be!

For the past few months, then, central bankers have backed off not just in the US but all over the world. Additional US hikes are off the table, and the Fed has signaled numerous times it will be reassessing, if not ending, the balance sheet runoff. Mario Draghi in Europe was going to raise rates this summer, instead the ECB will be offering a third T-LTRO. Haruhiko Kuroda should’ve ended QQE but that will probably get supplemented. The PBOC is doing a bunch of things and no matter why this will be called “stimulus.”

If “hawkish” monetary policies cumulative broke the markets, then shifting this way should undo some if not all of the damage. That’s the thought, anyway. 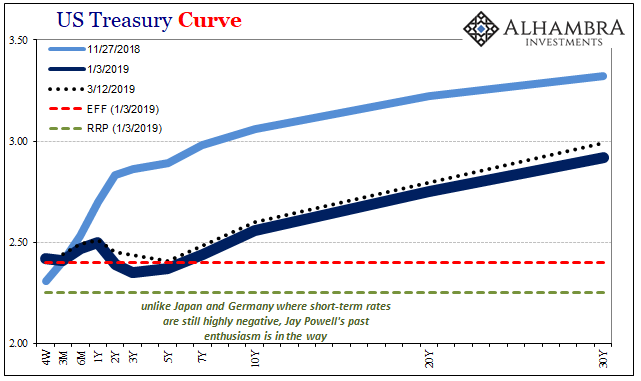 As of today’s session, before the close, the UST curve is absolutely ridiculous (again). The 5-year note is now trading almost equal to EFF (effective federal funds) once more, eleven bps less than the 52-week bill. The yield on the 5s is now significantly (4 bps) below the equivalent yield on the 3-month bill.

Nominal rates from there down the curve are mere bps off the January 3 lows. This isn’t quite how “dovishness” was supposed to turn out. 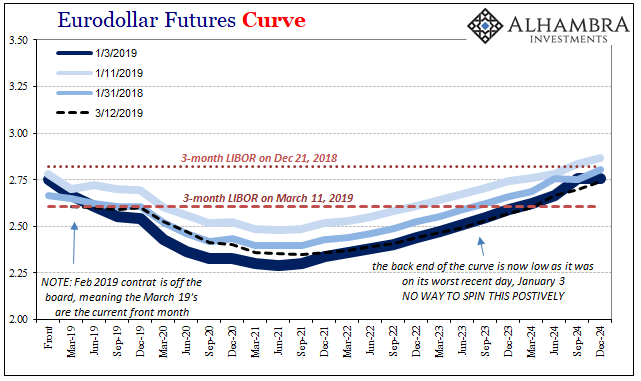 The eurodollar futures curve is likewise revisiting the worst case (so far). As these contracts have predicted, LIBOR rates have fallen which doesn’t mean things are getting better. Outer contracts are being bid to prices above those from January 3, which suggests this huge, crucial market is starting to get the sense that “whatever” is going on its effects might alter the long run, too.

To put this into terms Economists might understand, get ready to revise your R* downward (yet again).

This obviously begs the question: who is doing all this? Even now in March 2019, you will hear how this is all but noise, nothing really behind it but overblown hype. Just yesterday, Bloomberg published another article about how curve distortions of this magnitude are just “term premiums.” It’s like 2015 never happened.

Economists remain optimistic overall, if somewhat less than they were in 2018. Their outlook is still an inflationary one, only, as we’ve seen many times before, the final inflation outbreak merely delayed.

If bank Economists are still pitching higher rates in the future, who is hedging for liquidity risks today (and thus a substantially worsening outlook)? The Federal Reserve inadvertently gives us the definitive look, at least so far as the UST curve’s distortion goes. Reasonable extrapolation fills out the rest.

It is the least surprising answer.

According to The Financial Accounts of the United States (Z1), an exhaustive, comprehensive accounting of all things financial prepared by the Fed, US depository institutions bought/added the most UST’s on record during Q4 – the very three months when at first obvious distress began showing up (WTI contango) and then massive financial distortions and liquidations. 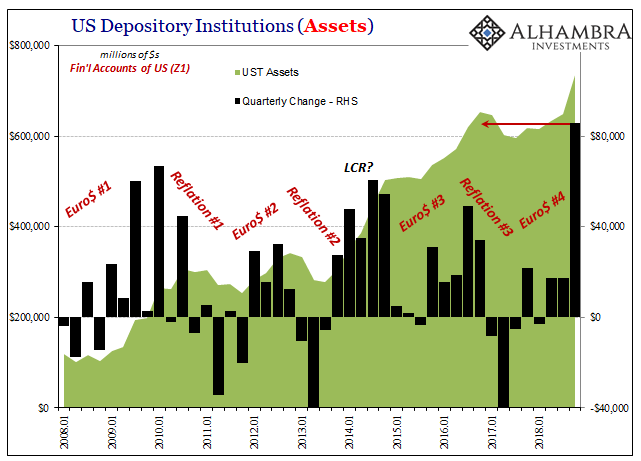 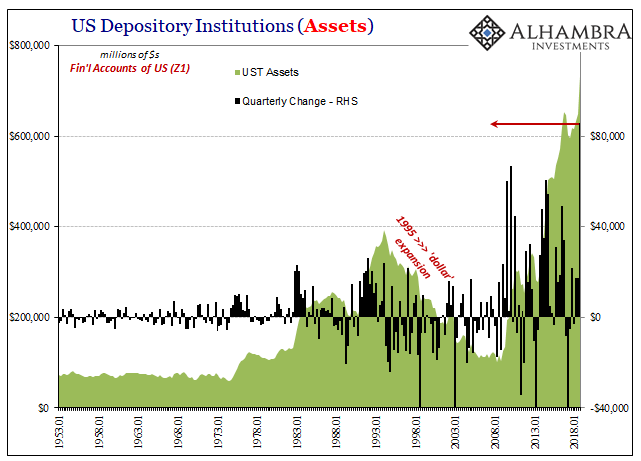 That’s a huge addition of UST’s to the aggregate bank portfolio, some $86 billion. That’ll bend any curve, even those pertaining to the most robust and liquid markets. It stands to reason that if banks were buying the safest assets here as a hedge, they were likely using eurodollar futures, too.

It is also quite likely, almost certain, that they are continuing to do these same things in Q1 2019. The generic Wall Street bank’s Economist will be on TV talking about how beneficial this “dovish” monetary policy turn will be for everyone, while at the same time the very bank they work for is thinking very differently.

Instead, their own traders are literally buying the opposite case to greater depths and frequency.

This isn’t about regulations, it is pure risk (liquidity) versus return. You could make the argument that banks bulked up during the latter half of 2013 and the first half of 2014 based on the looming, phased imposition of Basel III’s LCR, but there was enough going on during that very period which I would argue was far more potent inspiration to increase holdings of the safest, most liquid assets (which includes holding agency debt, and for reasons that have little directly to do with mortgages).

There is obviously no regulatory change that will explain Q4 2018, not that a few didn’t try 2a7 again. Perceived risk, monetary risk, does that and easily. 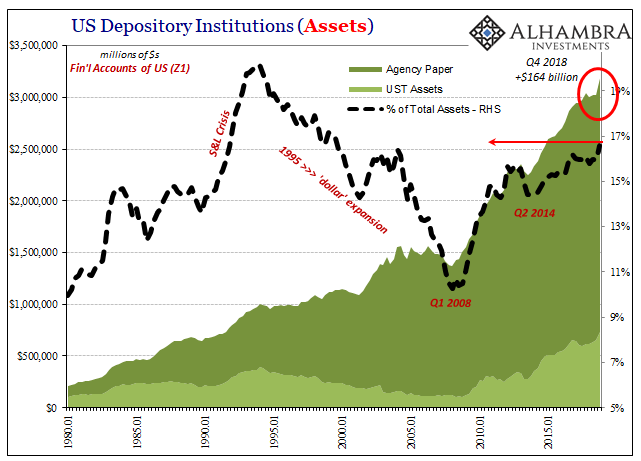 One of the arguments Economists have been using (trying to use) to justify their projections for higher rates, reflecting this better future economy, is supply and demand. Too much of the former unbalanced by so much less of the latter. Who in their right minds would want to buy or hold all this US government debt at such awesome times like these?

The better question is for Economists. Why aren’t the banks you work for listening to you? This only begins with the UST market. 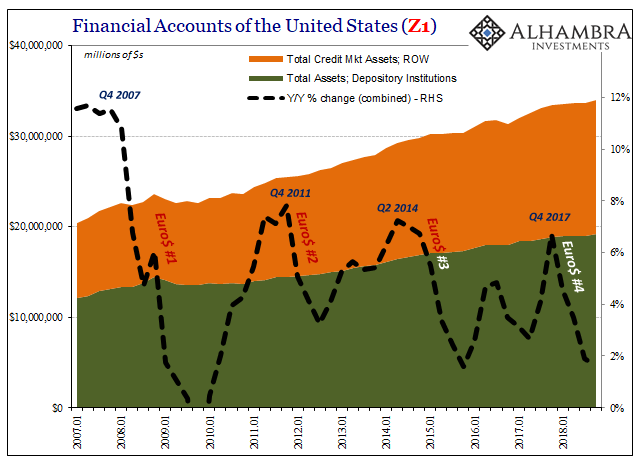