What’s In The Same Number? China’s Part In The (euro)Dollar Story

What’s In The Same Number? China’s Part In The (euro)Dollar Story

There’s one part of the dollar story I’ve not yet touched on recently. We’ve already heard, too much, about how the Fed’s killing the dollar, or at least is aiming to with all its immense money printing fire power. While it’s the euro which has demanded so much from DXY that it almost seems plausible (to a few) this time, what’s the real big one still lurking out there have to say about all this?

Rampaging global pandemic, dollar crashing, dollar smashing, global recession questions, massive, complex economic forces to go along with huge changes in financial conditions, as well as questions about those conditions, and the Chinese system pretty much in the middle of everything. The second largest economy in the world, one which is made (and broken) by incoming (or outgoing) monetary flows of which the central bank has involved itself heavily right from the very start of modern China.

And foreign reserves on the central bank balance sheet, the fundamental basis by which Chinese money exists, this moved by the tiniest RMB 70 million? In case you are wondering, it works out to a monthly change of -0.0003%. Nuh uh. No way. That’s a number which was quite obviously engineered. 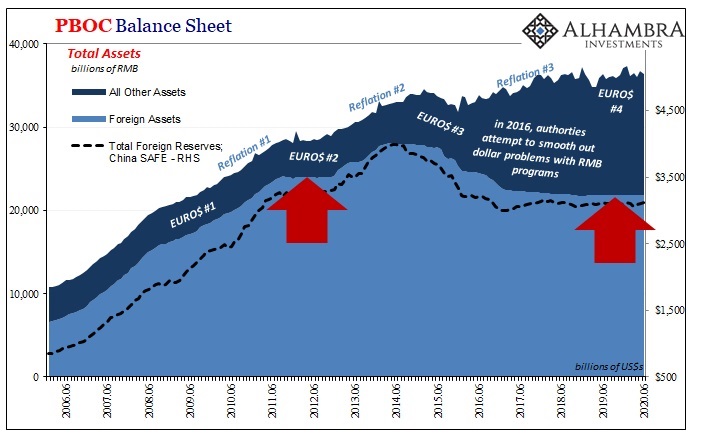 Therefore, the only real questions to ask Chinese monetary and foreign exchange officials, if you actually could, is just how much dollar financing they must be trying to make up for by clearly managing forex reserves and thus CNY; and where, exactly, have they been hiding it?

I doubt we’ll get any answers.

But for the broader dollar story we don’t necessarily need them. By being so blatant about it (they can’t help themselves, Communism’s penchant for bureaucratic rules taken to the nth degree) they’ve already told us what we want to know. CNY otherwise in danger of going down harder than it already has.

In dollar terms, that’s rising dollar stuff printed and published right here on the Chinese central bank’s balance sheet. If there wasn’t still the systemic global dollar shortage, then this charade just wouldn’t have been required. 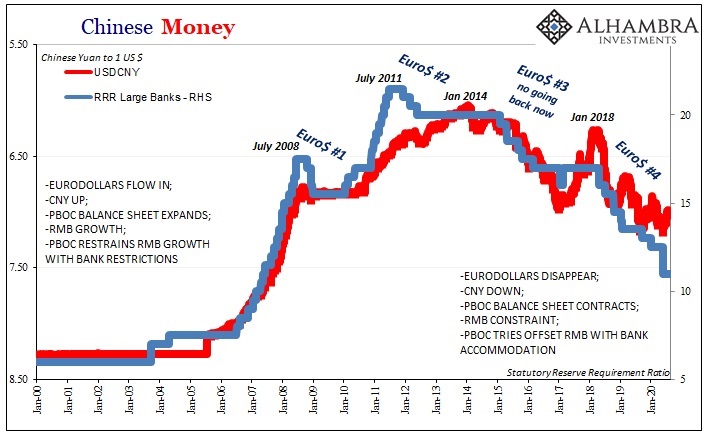 China’s monetary story is, after all, a thoroughly dollar-based one. The influx of “dollars” from eurodollar “hot money” (read: global banks extending and rolling over mostly short-term funding arrangements, including swaps and currency derivatives) entered China in massive amounts during the eurodollar age’s final mania spasm in the middle of the 2000’s.

When allowed to minimally float, their arrival pushed the Chinese currency, CNY, upward (the dollar downward) while massively expanding the forex monetary base of China’s central bank which continued scarfing up a huge proportion of those inflows trying to manage their excesses and the imbalances created by them (to very little success).

In addition to intervening with CNY, the PBOC also significantly raised the RRR especially for China’s biggest banks (above) – to lock up the RMB money creation made necessary by so many forex reserves (“dollars”) on the central bank’s books. A higher reserve ratio had meant though the big banks had more RMB reserves on their own balance sheets, the government demanded they do less with them by holding more and more idle in reserve.

China was, however, only mildly (relative to most) and temporarily disturbed by the first global dollar shortage which the rest of the world properly recognized as a global financial crisis (GFC1, or Euro$ #1).

Euro$ #2, that one beginning in 2011 the Chinese couldn’t escape (nor the rest of the world, especially EM economies). Over the next several years as global recovery was held back by the frightening realization that the systemic dollar shortage in 2008 wasn’t a one-off event, and that risks abounded all over the system, particularly liquidity risks no matter how much ridiculous QE was done in response, China struggled in transition from no-brainer, indestructible growth to holy-crap-we’re-not-immune.

That evolutionary process finally came to a head at the end of 2013. Eurodollars backing China began to slowly disappear. CNY necessarily reversed. While the world wrote of the latter in terms of some surprise, unspecified PBOC policy to squeeze speculators short its currency, it was clear to anyone who realized central banks don’t matter much how the Chinese central bank was actually struggling mightily to contain these negative monetary pressures – internal as well as external (below).

Without forex reserve growth, dollar denial (being involuntarily de-dollared) had meant, and would continue to mean, RMB denial, too. If one side of the central bank’s balance sheet isn’t growing, or even shrinking, then the other side, the liability and money side, must adjust in the same manner. It did: 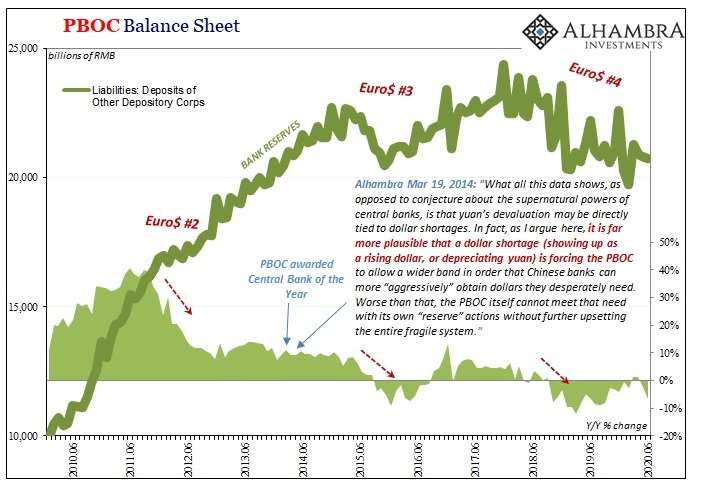 As CNY fell with 2014 turning into 2015, absence of external monetary growth started to become total absence; Chinese officials desperately turned to selling reserves and using the proceeds as best they could (meaning not well) to offset the eurodollar system withdrawing dollar financing from China’s banking sector. Dollar destruction.

To combat the internal RMB penalty this had meant, the heavy reduction in RMB bank reserve levels, the PBOC began to reverse the direction of the RRR; both it and CNY inextricably linked on the way up and now on the way down. Banks that had been mandated to lock up reserve balances when “too many” “dollars” had previously flowed in, they were now expected to use a greater proportion of shrinking reserve balances as the “dollars” disappeared from China (and the rest of the world, particularly EM’s).

While many things have happened since Euro$ #3 in 2016, one thing that has not – demonstrated once again by the PBOC’s recent sneaky balance sheet behavior – is China’s ongoing eurodollar difficulties. The magic Hong Kong hike of 2017’s globally synchronized growth bumper sticker campaign for rising CNY the big outlier for these reasons.

Sorry, Jay. Despite Chairman Powell’s alleged “flood” of dollar liquidity due to so much Federal Reserve balance sheet action, it sure hasn’t done much for China – which means the Chinese are in the same boat as everyone else. Rather than kill the dollar as is advertised, the PBOC, again, illustrates pretty well just why, and how, he doesn’t have it within his grasp to do so.

The eurodollar system is what moves the dollar, the whole dollar not just Europe’s currency, and it’s unmoved by the conventional love affair with all things Powell. Those who have been predicting the dollar’s demise will continue to do so but not based on any evidence as China’s central bank balance sheet likewise demonstrates. 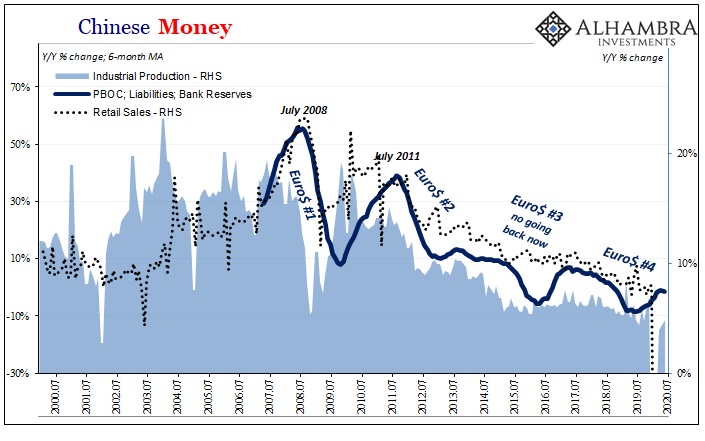 To recap: by the PBOC making it so obvious they’re intervening in their dollar short, they are further confirming that the dollar issues they’ve been experiencing for the vast majority of the time since 2013 haven’t come close to being dealt with by anyone on either side of the Pacific. The very stuff of even more rising dollar stuff. 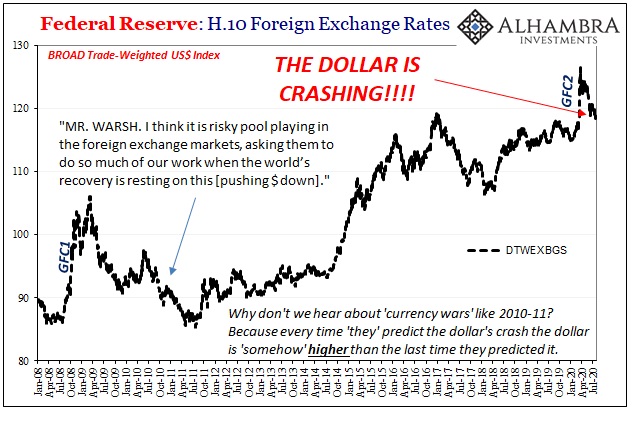