Part 1 of June TIC: The Dollar What

Part 1 of June TIC: The Dollar What

While the world is taking the smallest of baby steps in the right direction, mostly it’s been related to the part of the eurodollar system that everyone can see. Not bank reserves and the Fed’s “money printing”, though you can see them and we’re told to obsess about them those things don’t matter. I mean instead the dollar’s exchange value; for a very long time everyone was told that when the US currency rose broadly against other currencies it must mean something good about at least the American economy (strong dollar).

It has finally become more widely recognized (following repeated episodes) that when the dollar goes up it actually means bad things for pretty much everyone (especially those clinging to the “money printing” theory). But while it’s good making minimal progress it still leaves everyone exposed to myth, legend, and inappropriate assumptions as to why the dollar goes up when it does.

There’s quite a bit to go over in this month’s TIC data, important pieces for putting together this comprehensive global monetary puzzle with respect to both of those aspects. For your sake, we’ll divide the commentary according to each: the first dealing with the direction of the dollar and the second more focused on the why.

We therefore have to begin with the usual mocking overuse of exclamation points: OMG THE DOLLAR IS CRASHING!!!! A parallel to its cousin the BOND ROUT!!!!, these are things, you may have noticed, which don’t ever happen. Neither is happening now. 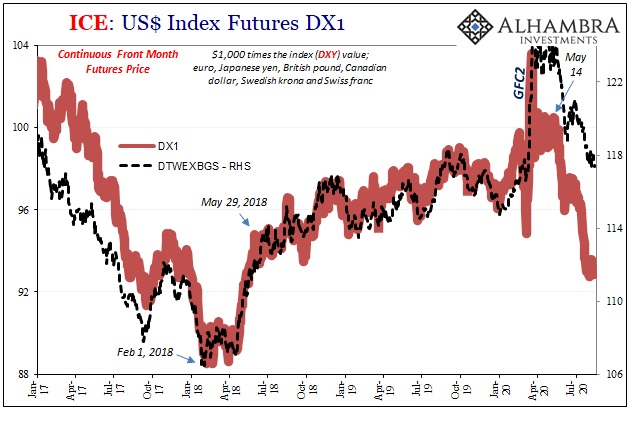 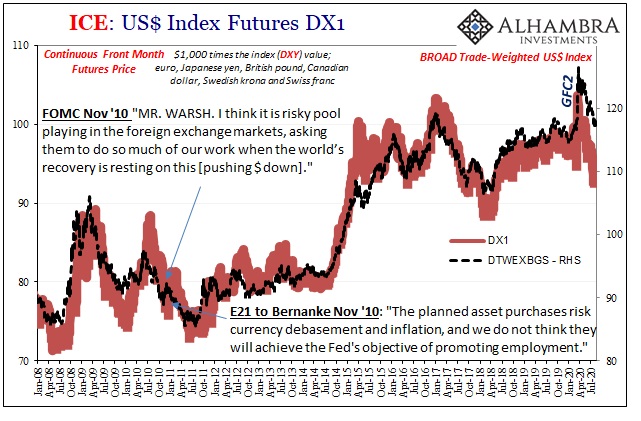 What is happening is DXY keeps moving to multi-year lows driven downward solely by the dollar’s exchange with the euro. That’s it. Given how mainstream convention works on myths, legends, and assumptions, the mythical legend of these assumptions is that DXY is the only price for the dollar.

Nothing could be further from the truth, including how the euro’s place in the dollar hierarchy (the real one) isn’t very interesting nor often relevant. This latest DOLLAR CRASH!!!! (there have been many others; and yet every time one is predicted “somehow” the dollar’s exchange value, even DXY, is higher than the last time one had been) is near exclusively European influence, as quite distinct from eurodollar influence. 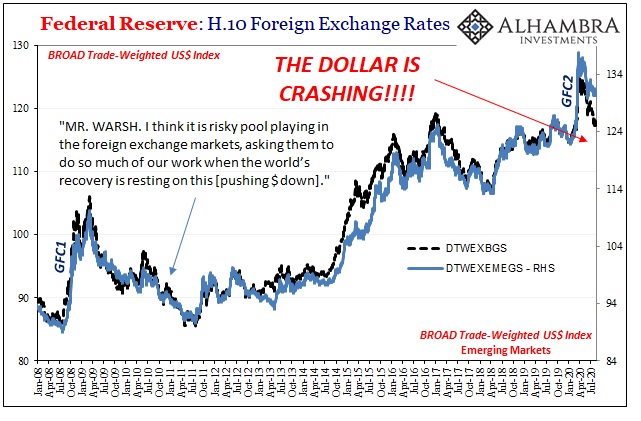 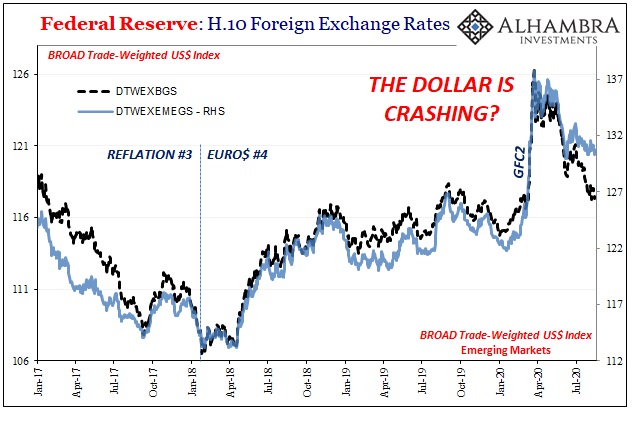 When you more and more eliminate that specific currency factor from the exchange value assessment, what you find is a very different set of circumstances. The Broad Trade-Weighted dollar index shown above includes, obviously, the euro within it but because Europe isn’t as much of the US trade regime as it is weighted in DXY its currency’s influence is more appropriately lessened.

When you remove the euro altogether, by looking at the trade-weighted index containing just EM currencies, an even more extreme divergence emerges especially in the context of so much presumed “money printing.”

The dollar has barely budged against the monetary systems who are most vulnerable to the lack of “money printing”; including the dollar destruction associated with global dollar shortages the Fed’s puppet show activities are powerless to get at – as we’ll see.

To that end, dollar swaps. The US central bank at the height of GFC2, after much of the system was already wrecked, changed the terms by which it would offer presumably US dollars (in the form of bank reserves) to overseas financial system participants clearly starving for them (after all, global fire sale liquidations). We’re left with the impression this was direct aid to the majority of that global dollar system.

What did happen was what usually happens – puppet show theatrics.

US banks, as I showed a few months ago using TIC, through their foreign subsidiaries bid up nearly all of the outstanding swaps and then those foreign subs transferred the “dollars” from foreign locations back onshore to their American parents (or, foreign parents bidding for dollar swaps at their local central bank, and then transferred the proceeds to their American subs operating here in the US; for accounting purposes in data like TIC, there’s no distinction since both forms are treated the same way). 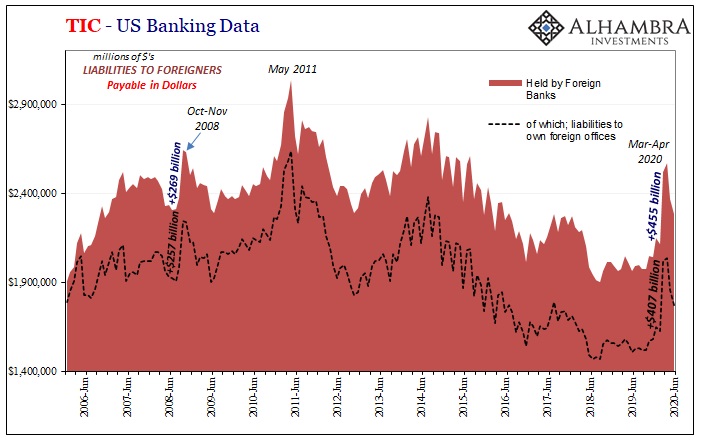 In May and June as foreign central banks scaled back what they offered of the “overseas” dollar swaps, sure enough American banks began to repay these same liabilities owed to their own foreign offices (parents and subs).

Thus, if dollar swaps were an intended effective money supply program meant for the rest of the global system it sure didn’t come out that way (just like GFC1). This only begins to explain why the dollar remains as high as it has outside of just the euro regardless of what Jay Powell does or doesn’t offer.

The Fed didn’t kill the dollar because, to start with, the dollar wasn’t killed and it wasn’t killed since the Fed really has no way to kill it. The monetary toolkit is simply the uncritical, uniform stories written all throughout the financial press which time and again “report” things that don’t and didn’t actually happen since they can’t.

What a truly pitiful age we live in.

And this, meaning the dollar’s stubbornness, is even more remarkable than it’s being shown in the broader exchange indices. What I mean by that is, China.

The EM index is holding up though CNY is seesawing at a relatively high level; relative to where it might otherwise trade if China’s currency had traded more like other EM currencies have. That’s another piece to which TIC helps us analyze these things more thoroughly. 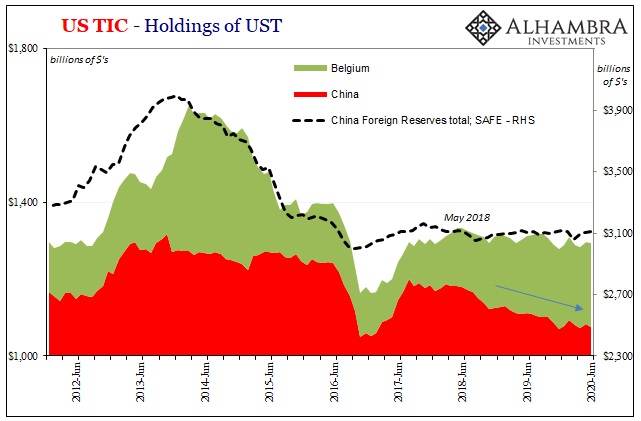 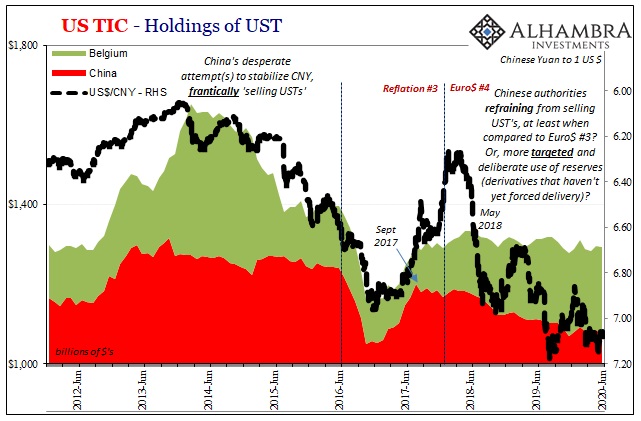 While it may not seem like it, especially since last September, CNY has been far more volatile in its longer-term downward trend since Euro$ #4 began than it was during Euro$ #3 half a decade ago when falling CNY was preposterously declared throughout that same mainstream media as an attempt at export-driven stimulus.

I don’t think there’s any doubt that was because Chinese monetary authorities (both SAFE and the PBOC) were more active first in the mainstream, conventional textbook which told them second to be more active in the forex markets. Selling UST’s, in other words. Altogether, nearly $1 trillion “disappeared” from China between the middle of 2014 (when CNY’s fall became more serious, as we said in March 2014) and the middle of 2016 – amounting to hundreds of billions in specifically UST’s as described by TIC.

Therefore, if you can’t actually arrest the decline then why be so obvious in burning through reserves trying to supply dollars that the eurodollar system won’t? Rather, perhaps the “Brazilian” method might prove more effective (spoiler: LOL) where a more targeted approach employing derivatives and other off-the-books techniques is intended.

If the eurodollar system is in charge regardless, and it is, as it has been proven time and again not just for CNY, then it might make more sense to stay in the shadows with the more limited goal of trying to keep things from getting out of hand knowing full well that if the eurodollar wants the currency to go down then it’s going to go down no matter what.

Which means, so far as the dollar is concerned, not falling; not really, even against CNY.

Sorry, Jay. Despite Chairman Powell’s alleged “flood” of dollar liquidity due to so much Federal Reserve balance sheet action, it sure hasn’t done much for China – which means the Chinese are in the same boat as everyone else. Rather than kill the dollar as is advertised, the PBOC, again, illustrates pretty well just why, and how, he doesn’t have it within his grasp to do so.

The eurodollar system is what moves the dollar, the whole dollar not just Europe’s currency, and it’s unmoved by the conventional love affair with all things Powell. Those who have been predicting the dollar’s demise will continue to do so but not based on any evidence as China’s central bank balance sheet likewise demonstrates.

Let’s be simple and direct – a real falling dollar, like that which existed prior to 2008 and then again briefly in specific cases (such as EM’s) between 2009 and Euro$ #2 in 2011 would see eurodollars (bank liabilities) flowing back into China; they aren’t. If Jay Powell was flooding the world with liquidity, they’d show up there, too. They aren’t, either.

What has changed between 2014-16 and 2018-20 is only the way in which Chinese authorities are dealing with what’s really the same issue. Dollar destruction and the potential for more by all accounts (especially those on the PBOC’s very own balance sheet) seems to be keeping China busy even if less outwardly this time compared to five years ago.

Outside of China, the dollar’s just bad no matter what; as we can see when we aren’t led by the nose to focus exclusively on the euro’s involvement in DXY.

Why isn’t the dollar crashing? That’s the stuff which makes up dollar destruction which we’ll get to in the next part. Just to give you a small preview: an enormous dose of T-bills.