There is great allure in comparing our current economic circumstances to those in 1937, and why wouldn’t there be? The associations are especially striking, starting with the gaping hole left over by each contraction. Each recovery, then and now, was at least moving in the right direction but not nearly fast enough to close the gaps. So where growth rates were positive and seemingly sufficient (at least in the early part of this one), that was only where no accounting was made for the starting position.

The real economy and those of us in it cannot, as economists do, just forget that point or so easily move the goalposts. A real recovery means exactly what the word means; rejoining and re-attaining the growth and trend that existed before the collapse, not being happy with some positive numbers that show up in its aftermath. It was true throughout the middle 1930’s, and as we know too well that is the case now.

The other great similarity is monetary. The Fed in the early and middle1930’s did not partake in quantitative easing because they did not have to. Gold flowed into the US at nearly a record pace, nearly as strong as during WWI when the rest of the “developed world” fled the gold standard (and irrevocably altered monetary history). Between April 1935 and June 1937, the US reported gold stock jumped by almost 40% and swelling the level of excess bank reserves (meaning total reserves above statutory requirements). It was such a large increase that the Fed began debating as early as 1934 whether it should act to head off “inflation”, concerned as they were about “overheating” even though everything about economic capacity and utilization indicated only continued “slack.”

All the way up to the cycle turn in the summer of 1937 the Fed and its staff economists were absolutely convinced the recovery was nearing completion and was fully durable. The FOMC had voted to raise the level of required reserves back in December 1935, announcing their intentions in July 1936 with the first increase effective that August. From the start, bond markets especially UST’s began sustained selling. When the first part of the second reserve hike took place on March 1, 1937, the bond market was put into increasing disarray, especially Friday, March 12.

It was such that Treasury Secretary Henry Morgenthau, Jr., called Fed Chairman Marriner Eccles to his office for an explanation. The Secretary blamed the Fed’s reserve requirement changes for the disruption in bond markets; Eccles countered that it was just froth (as Alan Greenspan would say) on the way to normalization (as Ben Bernanke would say). The Fed would eventually take some very limited action, more so to placate Morgenthau than to actually expend effort.

The bond market irregularity was a stark warning to the Fed that it had it all wrong; the buildup of excess reserves was not indicative of financial and market strength but rather weakness. Further, the uneven distribution of those reserves threatened to replay the same bottlenecks in the correspondent system that had created the first crash into Depression in the first place. The Fed ignored the warnings and insisted it knew better what it was doing and what the economy was doing. They were proven so very wrong in very short order. 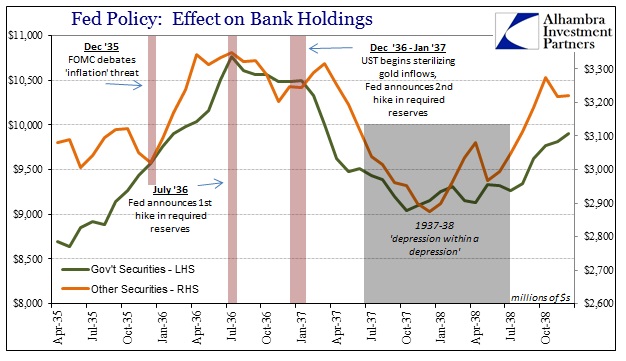 That may be the most striking difference between then and now. The FOMC discussions of the middle 1930’s could easily be confused as if that were uncannily referring to our current circumstances except that they only got the one warning. After creating “tightening” conditions and systemic illiquidity, everything happened very quickly. In our own replication of the conditions, this FOMC has been afforded the benefit of warning after warning after warning; to which they have responded, as their prior version, by ignoring every single one of them as if they were all just random.

If there is a difference between this point in mid-cycle and that in the middle of the Great Depression, it is that the cycle in 1937 developed very quickly and though devastating passed in relatively short order (as does any cycle). This one, however, is something altogether different as it presents itself as a slowdown that just won’t stop slowing down. Even secular stagnation, which was an academic attempt to describe the slowdown as slow but steady growth and thus entirely concerning but benign, has been increasingly cast aside as what we find now is neither recession nor stagnation but instead slow but steady contraction.

It began in 2011 and early 2012, but the state of the “dollar” has been utterly unyielding this whole time about where this was all going if not entirely clear on how and how fast the decay would be achieved. For example, when the TIC figures for June 2013 were released that August the credit markets and overseas currency markets (funding derivatives) had already experienced great upset, the first clear warning; the TIC data merely confirmed where that was coming from, i.e., the “dollar.”

The US$ shortage has been a theme around here for most of 2013. To this point, it has been largely hidden in the shadows and vagaries of modern global finance, only hinted at through secondary and tertiary indications. Even then, like the gold selloff, the dollar shortage was ambiguous and cunning. From repo warnings and the dire state of collateral availability, to emerging market currencies it has been slowly building.

From the gold crash earlier that year to the sudden irregularities in repo, they were more than hints of financial problems throughout the “dollar” system before it broke open that June. The Fed has only dismissed them outright, insisting it knows best about the recovery and economy even though the warnings have only persisted one after another. Not only have these individual acts of foreboding continued in almost regular fashion, they have, of course, intensified after each and every one. In just the last almost two years there has been a blatant return to repo fails and collateral problems (June/July 2014); a UST “buying panic” (October 15, 2014); the first major reversal in the junk bubble, alongside the dramatic ruble crisis (December 2014); the sudden and stunning break of Swiss National Bank (January 15, 2015); the first wave of the commodity crash, especially oil; the PBOC incredibly being forced into “devaluation” (August 2015); that “somehow” led to global liquidations in very short order (August 24, 2015); more junk bond and commodity crash and blow ups (November 2015); and then a repeat of global liquidations also accompanying still more and heavier CNY “devaluation.”

In this last one at least the media seems to have figured out what the Fed refuses to, namely that every time the Chinese yuan happens to greatly “devalue” the rest of the world’s markets do too. It really doesn’t take too much imagination to connect those dots.

I have left a few others off the list, but no matter what the Fed and economists treat each and every one of those as if they were all individual and random. They make no connection at all, especially going back to the first real hints in 2013. They see what they want to see, which was and remains nothing but recovery. In that respect, it was the gold crash that may have been most disturbing, as that was heartily celebrated as if it were consistent with their greatest wishes; when it was, again, a serious warning(that has only been proven correct) about the state of global liquidity and funding.

The single unifying strand through all of this is the “dollar”, as it continues to work in unwinding both financial function and increasingly economic function globally. Unfortunately, the speed at which this is all taking place has seemingly worked in the FOMC’s deluded favor; since, unlike 1937, they weren’t immediately and unambiguously proven wrong about monetary and economic conditions that has allowed them to continue to somewhat plausibly assert (though much less so of late) their own version of things. Even as far as it has gone, they still do; “global turmoil” is a cop out, as if the trouble were located at some far flung location with very little to do with the domestic economy or dollar system. It is almost the perfect reflection of “global savings glut”, which Greenspan’s FOMC insisted was some equally mysterious, overseas condition just in the opposite direction.

The fact remains the FOMC is just as wrong now as it was in 1937, and it has been warned repeatedly of that to no avail. The nature is also the same, which is really the most troubling aspect of all of this:

It is absolutely astounding that the nation’s deputized monetary agency, private in ownership though it may be, still has not the slightest competency over money and monetary affairs such that it would repeat almost exactly the mistaken interpretations and tendencies first made eighty years ago. Progress is slow within bureaucracies, to be sure, but this is all uncanny. Economists have never much liked markets and politicians even less, but the combination of those two here into the Federal Reserve’s modern existence is an unending string of ineptitude from one side to the other – and all of it still contained within its supposed core function. It’s not just that they don’t get money, they also have no idea how money actually relates to real economic function.

You can draw an almost straight line from 2013’s gold crash to the increasingly recessionary conditions we find globally today and Janet Yellen will talk instead about only the unemployment rate as if it were some legendary shield against both the Fed’s repeating history and the obvious.