Surely Confused By The Slope

Surely Confused By The Slope

Goldman Sachs did not disappoint. The bank’s earnings for Q1 were a disaster slightly worse than what was already anticipated as beyond bad. There was nothing that the firm did that it can say it did well, as Goldman’s CEO admitted there was weakness or “headwinds across virtually every one of our businesses.” For eurodollar or wholesale banks, that has been the constant refrain; it has only gained notice over the past year or so because of the obvious intensification.

Revenue dropped 40% to $6.34 billion from $10.62 billion, less than the $6.73 billion that analysts were expecting and the lowest first-quarter revenue number for Goldman since 2004. The revenue decline was nearly twice the 21% drop at Morgan Stanley. Other banks with big Wall Street units reported revenue declines between 3% and 11%.

It was bad in all the core businesses:

Trading revenue fell 37% to $3.44 billion from $5.46 billion in the first quarter of 2015, which was a particularly strong period for Goldman. In the past week, other large U.S. banks reported trading results that ranged from a decline of 11% at J.P. Morgan Chase & Co. to a drop of 34% at Morgan Stanley.

Goldman’s fixed income, currency and commodity trading revenue fell 47% to $1.66 billion from $3.13 billion a year earlier, with all of its major businesses in this unit performing worse.

FICC and investment banking, once the very guts of the eurodollar system are now leading these banks to be gutted. Again, all that was expected where only the degree was in doubt, so what remained to be heard was the updated attempt to suggest why this wasn’t really a concern. The Wall Street Journal dutifully provided just that:

For all the pain felt by big banks, there were no big trading missteps, no multibillion-dollar losses, no need for executives to reassure panicky investors about having sufficient liquidity or tamp down questions about solvency. In fact, the five big Wall Street banks earned almost $14 billion combined in net profit in the first quarter.

This points to the postcrisis resiliency of the big banks and shows how much they have changed from their precrisis gun-slinging ways. In other words, the first quarter presents a real-life argument that regulators have gotten the safer, more boring bank system they wanted.

I believe this is a fundamental misreading of the situation and it exactly parallels that which plagues commentary and what passes for analysis about the real economy. A slow motion crash is still a crash, especially what (likely) waits at the end. It is the same mistake that those suggesting there is no historical version of recession in process now somehow means that the economy must therefore be completely upright; that misses the wider context of the slowdown and very different implications. Because Goldman and its peers did not turn in a quarter that looked like Q3 2008, therefore the banking and monetary system is “resilient”? Narrowness and recency bias are a perilous combination.

A single glance at banking history since the panic would put such notion to full rest; Goldman included. The significance of Q1 2016 earnings, just as those quarters immediately prior, is that it offers yet more confirmation that only danger and depression lies in the eurodollar system or the overall financialized economy. Getting out of it is now the only choice. 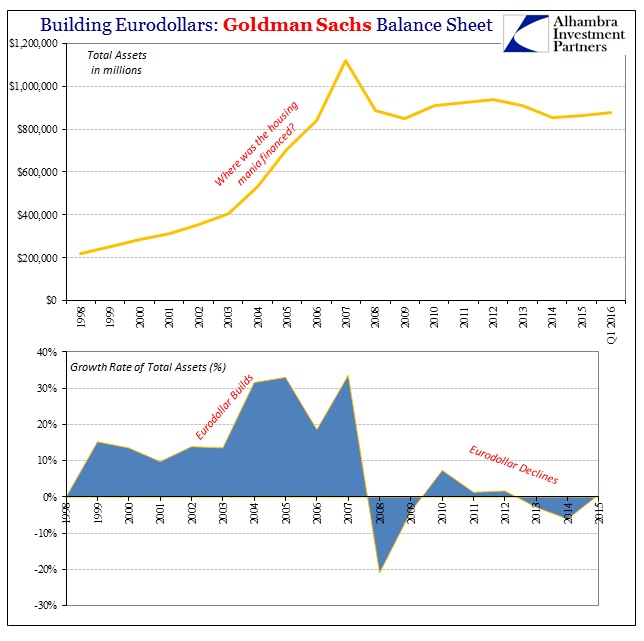 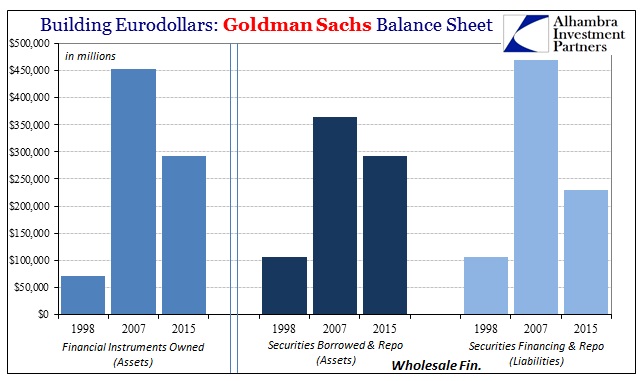 The Journal, as so many others, would ascribe to that willful conduct and a conscious choice on the part of regulators, those supposedly seeking, “the safer, more boring banking system they wanted.” In theory, that is the way it should be; we would all celebrate such an outcome as the first step in the restoration of sanity and real economic balance. But that isn’t at all what is going on here, as boring banks may well be the future but it is the interim that will plague the reset. We have already seen a taste of it after having been warned (repeatedly) for years about it.

Withdrawal of eurodollar money dealing is an ideal goal, but you can’t just have banks do it without any support or plan to pick up the slack. What August and January showed is that there is no slack and the slow motion crash of bank withdrawal can surely speed up in acute doses. I’ve warned about this for years, stating bluntly last May:

Clearly the entire eurodollar system has been undertaking pains of withdrawal all the way back to August 9, 2007. What is at issue is what might constitute that second transition, to get from B to C… My position is that the transition has already been rocky and with some very dangerous results so far (October 15, January 15). The Swiss National Bank can attest.

We can add the PBOC to that list along with the entire Brazilian economy and now its very social structure, too, as well as US manufacturing and industry and perhaps even the actual state of payrolls and employment. In other words, there is hardly any financial or economic account or factor that has been spared.

I personally find way too much complacency in blindly believing that going from B to C will be only a minor inconvenience. It would be dangerous even under the circumstances where the system shifted from the dealers to the Fed and back to the dealers, with an infinite series of potential dangers even there. But to undertake a total and complete money market reformation from dealers to the Fed to money funds? There are no tests or history with which to suggest this is even doable under current intentions…I think that still understates whether or not we ever get that far.

The fact that banking in 2016 is not the same as banking in 2008 quite misses the point. It is unfortunately possible that the direction and trajectory actually means that 2016 (as 2015) points to an even worse fate than that of the Panic of 2008 and Great Recession. It is, so far, a slow, painful, drawn-out death by any number of small imbalances that only continue and fester. The US manufacturing recession, for instance, has gone on for more than a year and a half already and still it’s as if it were only the start of recessionary imbalance (inventory); Goldman’s earnings portend only worse “dollar” conditions ahead and therefore still more “headwinds” for the global and domestic economy that has been worn down by them for almost two years already (and really for longer under the surface).

The world seems totally confused by the slope, and in some ways that isn’t surprising. Again, a slow motion crash is still a crash – though “crash” may not be the best suited description, as that is just one possible outcome of what is really more like a systemic reset that could manifest any number of ways. Unfortunately, without actual assistance from some determined effort by somebody somewhere, messiness continues to be indicated. It demands an open inquiry but all we continue to receive is dogmatic (thus, worthless) reassurance.

It’s somewhat comical in that regulators and authorities appear dead set on proving they learned their lessons from 2008 (after performing with what looks like ritual dogmatic reassurance as their prior standard) to the point they actually try to ascribe to their own prudence another exhibition of trouble. Instead, what they learned, best case, is how to spot another 2008. Unfortunately, it isn’t 2007 anymore as 2008 was just the opening act. 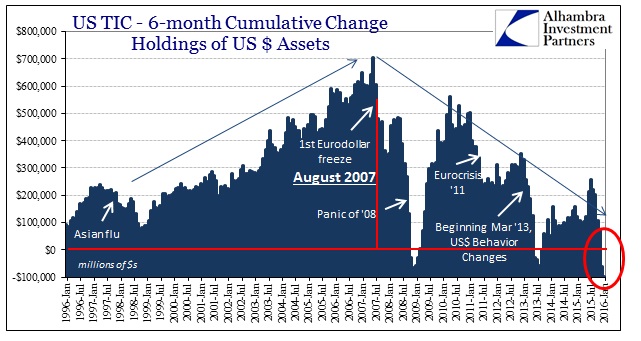