US Industrial Production Without Autos & Oil

US Industrial Production Without Autos & Oil

Industrial production declined for the eleventh consecutive month in July, down 0.5% from July 2015. Though the slope of the contraction continues to be unusually shallow, the fact that it has lasted for nearly a year now is significant particularly in the context of the “rising dollar” period. On a monthly basis, IP is up from its low in March, particularly in the past two months (though the rise in July is susceptible to revision next month, as June’s increase was revised significantly lower with this month’s release).

As with other economic accounts, the more recent gains during spring are being considered as meaningful changes. As noted before, the drastic declines in not just markets but economy at the end of last year and the beginning of this year had the obvious effect of converting even stalwart optimists into less biased observers. What once seemed unthinkable, recession, suddenly seemed not only realistic but perhaps even imminent.

Since February, the fact that the economy does not appear to be getting worse, very much related to the “dollar” after February 11 in its reverberations in sentiment and even relative economic performance (less bad), initiated a tremendous sigh of relief as if the whole matter has concluded. Every monthly gain, no matter if still in contraction year-over-year, is greeted enthusiastically as if that were the case. 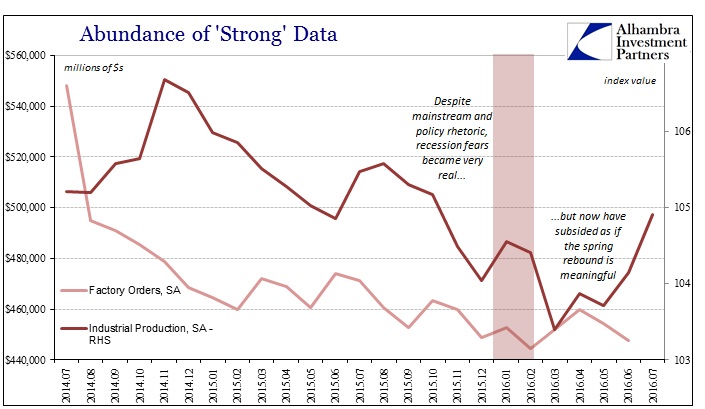 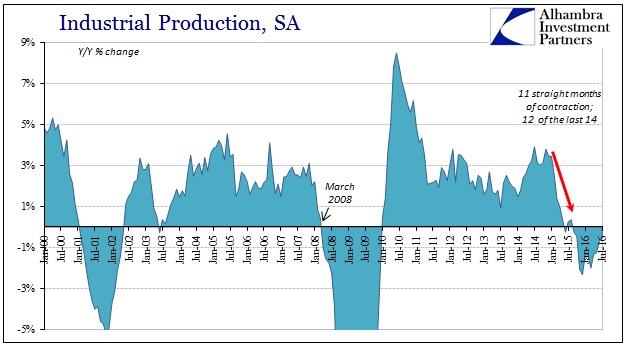 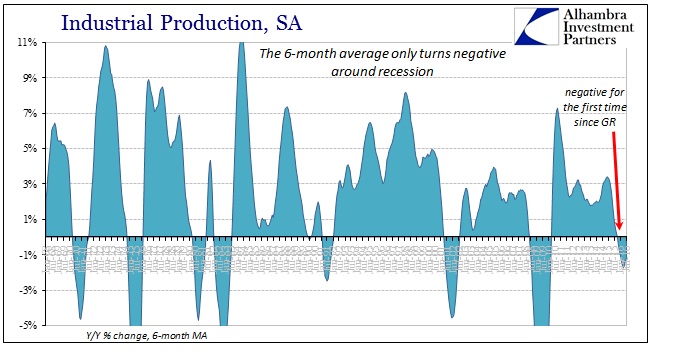 It is a dubious proposition based on just the “dollar”, or even wider context of just the past two years let alone the past seven, but more so given what each of these economic accounts indicate internally. For industrial production, manufacturing of consumer goods remains seriously and conspicuously subdued (in agreement with overseas production) and still weaker in 2016 as compared to 2015. Part of that relates to what is clearly a slowing pace of automobile production. Motor vehicle assemblies, for example, which had declined sharply in May only to rebound in June, were back down again in July, keeping the level of auto production increasingly below its prior trend. 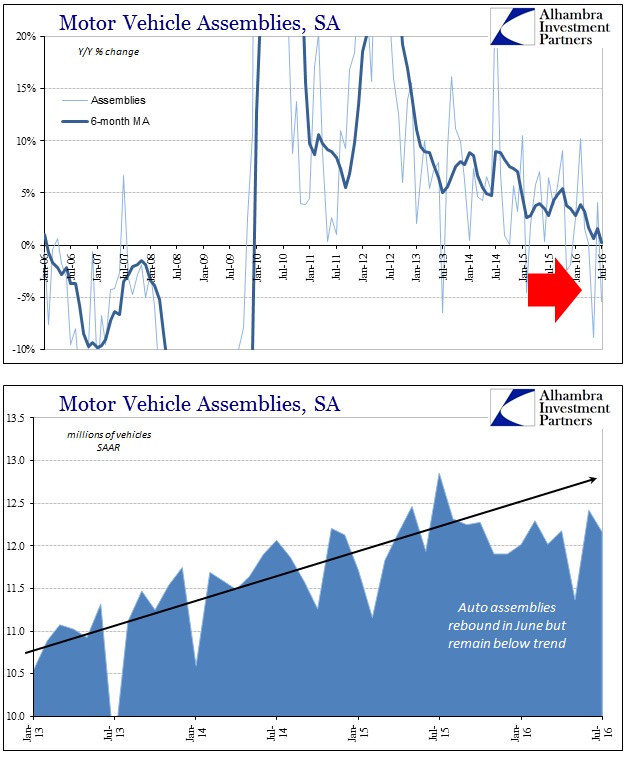 That is a troubling development given that the auto sector has been one of, if not the only, bright spot in the “goods economy.” It is also consistent with what we find in retail sales, as well as recent pronouncements from the industry itself (“plateau”). Without the usual boost via the motor vehicle sector, IP overall should struggle to regain any momentum beyond the current seasonality.

The other major support for US industry had been oil and gas production. The crash in oil prices, no matter the rebound so far this year, has clearly ended that trend; the idea of “transitory” is exclusively the domain of politicking. Oil production in the mining sector is only now starting to become a significant drag on overall industrial activity in the US. Year-over-year, IP in oil is down 10% and there doesn’t appear to be any rebound seasonal or otherwise in the near future. 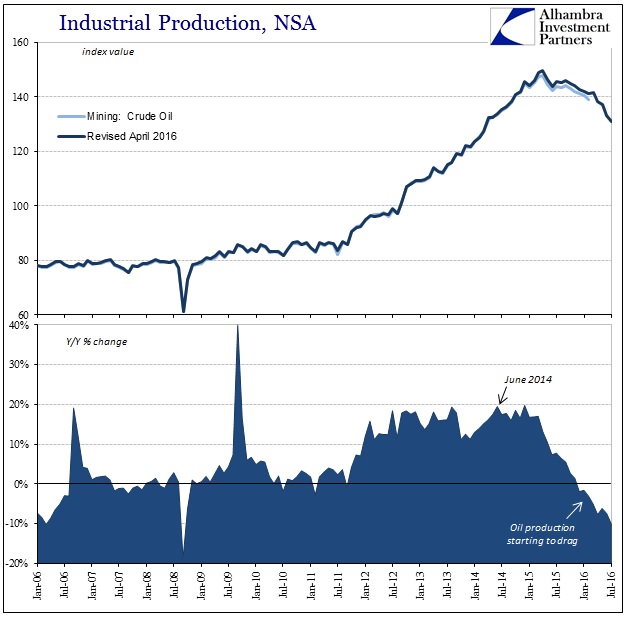 Instead, at least as far as the Fed’s IP statistics are concerned, the contraction in oil production seems to be gaining even as oil prices are back into the $40’s once again. That would appear to confirm that domestic production needs a much higher oil price and likely for more than just a brief appearance.

If both the auto and oil sectors continue to drag that would mean an even greater threshold for US industry to resume even marginal growth. The weak (pitifully weak) “recovery” so far had been largely based on those two efforts; without them the economy would need to find truly surging alternatives. Given that auto sales have drastically slowed and production of consumer goods overall heavily downcast for years now, it is quite unlikely that any positive offset will be forthcoming via the consumer sector (which again deviates almost totally from the unemployment rate). That leaves either utilities (which would mean another “tax” on increasingly exhausted consumers) or an imminent surge in capex. With profits, cash flow, and earnings also contracting and restrained, that doesn’t seem likely, either. 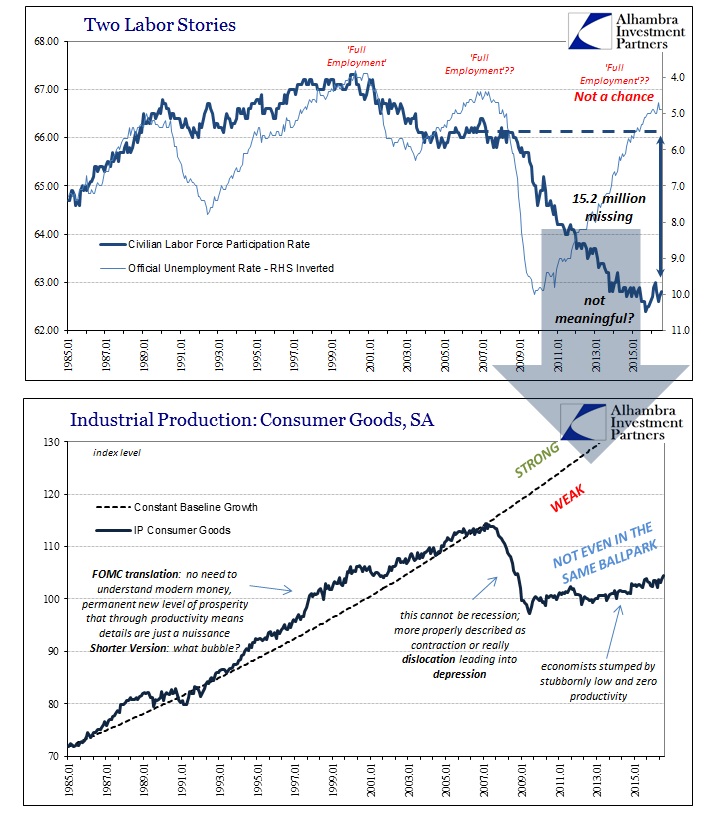 It looks as if the trajectory of US industry in the intermediate period ahead will be determined by marginal auto production. Should it continue to fall below trend, then that suggests overall IP will continue to be flat to slightly negative; if motor vehicle production starts to fall off in more recessionary fashion, I think it an increasing possibility that the same would occur in more than just the auto industry. The key will be, as always, the effect on inventory; will slowing the pace of production be enough to start to bring down the inventory on the wholesale level, not what’s in dealer showrooms and on their lots?

What is left beyond is the true state of the US economy especially since 2012, now laid bare, stripped of its two major artificial enhancements. Despite the seasonal orotundity, this is a good reason why 2016 is lower and slower than 2015 – even during spring. 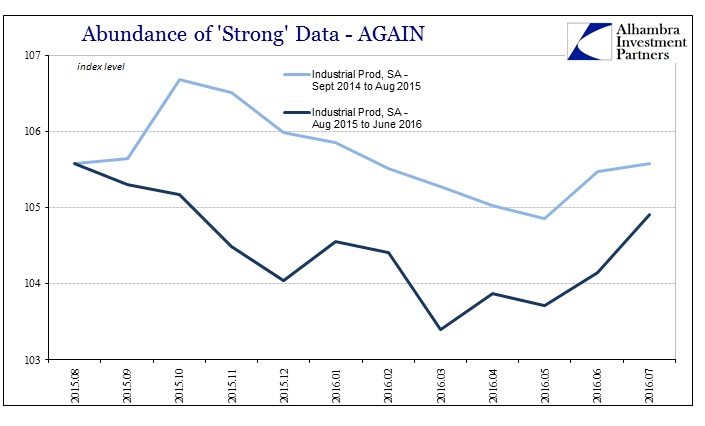