I’m going to go back to Mexico for the third day in a row. First it was imports (meaning Mexico’s exports) then automobile manufacturing and now Industrial Production. I’ll probably come back to this tomorrow when INEGI updates that last number for November 2019.

For now, through October will do just fine, especially in light of where automobile production is headed (ICYMI, off the bottom of the charts).

Mexico is, as I’ve been writing this week, the presumed winner of trade wars. You might be astounded by just how much the country and its economy is benefiting from companies leaving China. The Trump administration may not have equalized wage rates between Asia and the US, but it appears the tariffs are making it much harder to employ Chinese workers over Mexicans.

As such, Mexico really should be booming (in the old, truest sense of the word) and we already know that it is not. Therefore, this is our control, one of the purest we might best employ to test the trade wars hypothesis – that “protectionism” and more so its depressing “sentiment” are the causes of 2019’s global economic ills. 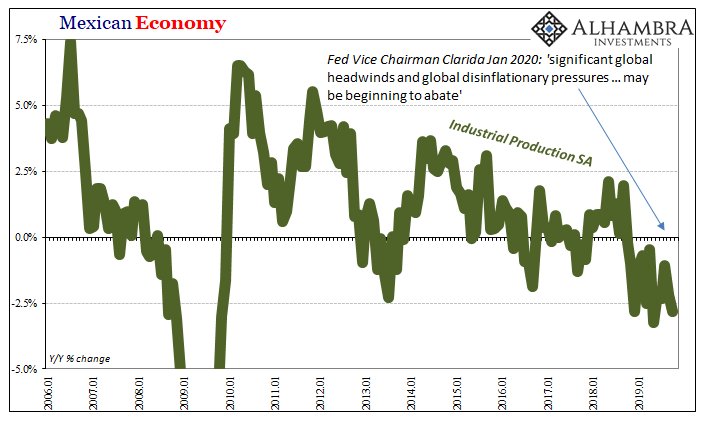 Mexico, however, is obviously struggling and doing so to a degree it hasn’t since 2009.

This is relevant to our discussions here in the US both as to cause and effect; therefore, what we might expect of our part of the global economy heading further into 2020.

We already know what our central bankers are expecting. In case you’ve missed their confidence, Federal Reserve Vice Chairman Richard Clarida was in New York (thanks M. Simmons) earlier today to reiterate the official stance.

OK, but why the need to point that out?

…over the course of 2019, the FOMC shifted the stance of U.S. monetary policy to offset some significant global growth headwinds and global disinflationary pressures.

Interesting that he explicitly blames “global growth headwinds and global disinflationary pressures” as if he or anyone on the FOMC takes any of them into serious account. As we described all throughout last year like the year before, the Fed pays very little attention to the dollar or more importantly why it moves the way it moves.

Those were, and are, the global headwinds and disinflationary pressures at their source.

But Vice Chairman Clarida, after having been surprised by just how powerful and, dare I write, globally synchronized they were in late 2018 and all of 2019, he is now much more optimistic about 2020 discounting his total shock and surprise about the year before – with the US economy apparently beginning this year in a good place.

In 2019, sluggish growth abroad and global developments weighed on investment, exports, and manufacturing in the United States, although there are some indications that headwinds to global growth may be beginning to abate.

This has become conventional wisdom since early September. Mistaking bond market signals, as if the 2s10s curve inversion was the only one, and a definitive all-or-nothing about recession, sentiment has shifted based largely on that mistaken impression of interest rate behavior and so has the official view of it.

As noted yesterday, right now the idea of abating headwinds rests solely upon the more positive sentiment – because it isn’t showing up in any of the data.

Mexico being one test case for both trade wars as well as the idea of diminishing disinflationary pressures. Zero for two as far as our Mexican friends are seeing.

As a potential proxy for global conditions, is Mexico an outlier? Not remotely. Using Industrial Production for each, let’s add all of Europe, India, Japan, and Brazil on top of the US version of the statistic. 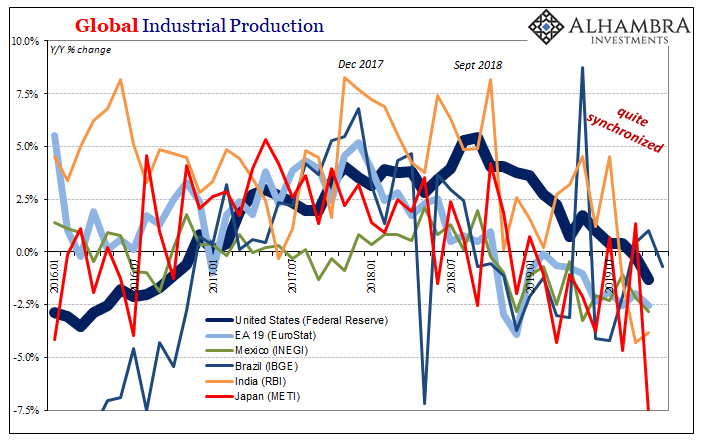 Even in the jumbled and noisy month-to-month mess you see above, the pattern is clear enough heading from left to right. The further left you go, meaning the closer to now, the less of a jumbled and noisy mess which all points to…accelerating headwinds and disinflationary pressures.

As 2019 drew to a close, all these various national industrial sectors moved in much the same direction and closing in on the same acceleration for it. Just to emphasize the point, we can smooth them out by using 6-month moving averages. 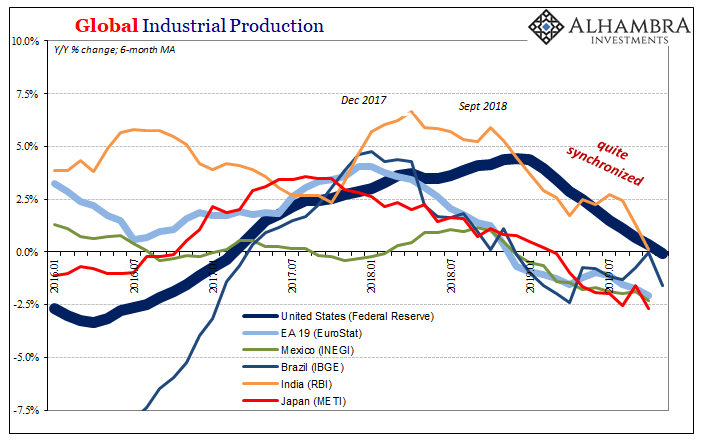 No surprise, Clarida’s clarifications aren’t holding up very well. For the US economy’s “good place”, the most charitable reading of the data on industry is that it is bringing up the rear being still influenced by an increasingly synchronized global downturn.

We can even add China and its notoriously rigid IP stat to our examination, and still it works out the same way: 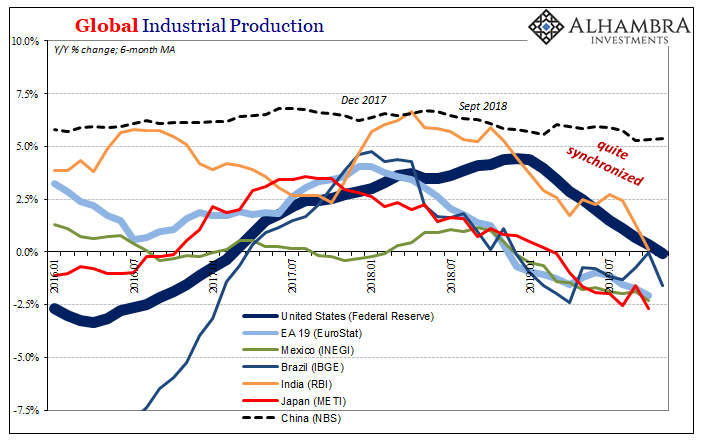 Everyone, and I mean everyone, was still slowing upon approaching the end of 2019. If the headwinds and disinflation had abated, or is abating, it can only be in terms of sentiment because it is clearly absent from the broadest industrial data across a wide range of geographic locations and types of economies.

Maybe the Fed’s Vice Chairman would object to industry being used here as our standard economic proxy; after all, industry and especially manufacturing or the goods economy isn’t as much of a proportion as it once was. Services saves the day, or at least that’s what people keep saying. 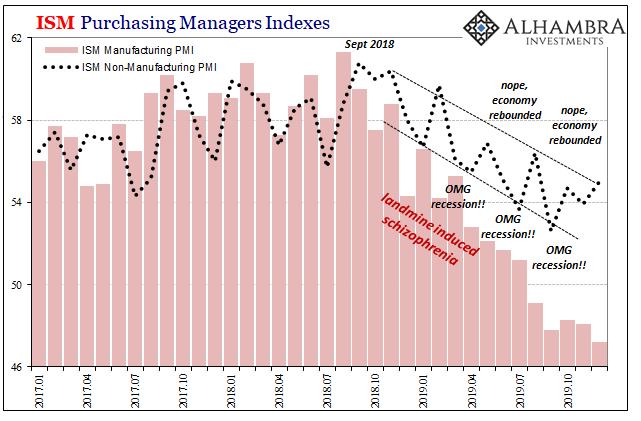 It’s true that industry and global trade have taken a step back when it comes to proportioning economic activity, but these still exert significant pressures such that time and again (meaning these Euro$ squeezes) that’s where we see these downturns begin and how they progress. For all the screeching about the service sector, industry remains a very good leading indicator (particularly Japan’s) for the marginal global or whatever national direction. 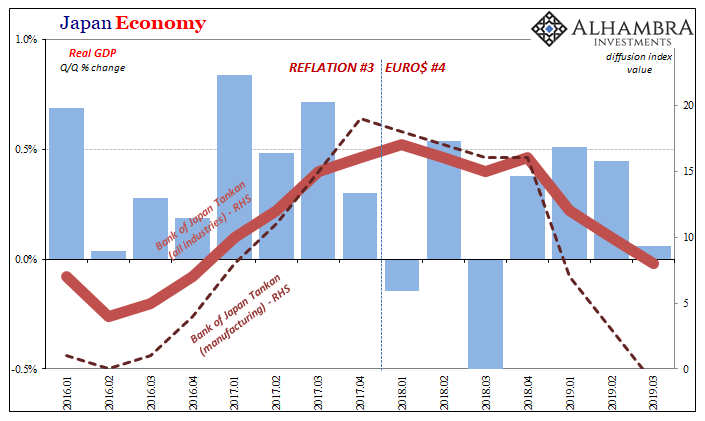 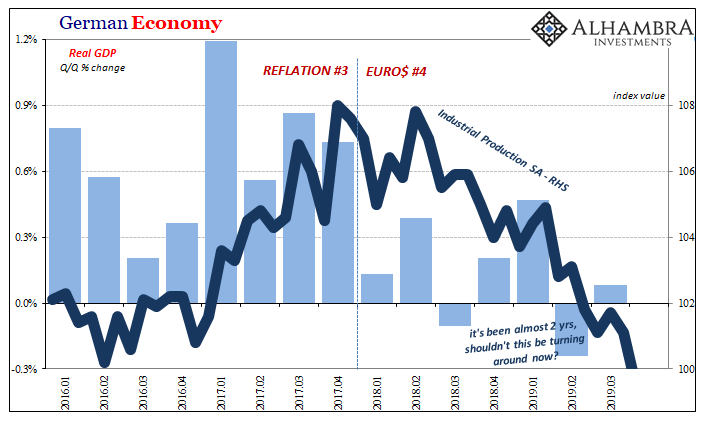 Bringing us back to Mexico. As a winner from the trade wars it is indistinguishable from all the rest of the economic losers – which, as I have to keep pointing out, is everyone. What our southern neighbors are experiencing is a good and significant enough representation that officials like Richard Clarida and Jay Powell might want to start paying more attention to how that economy is really doing in order to better project how ours might be.

Global headwinds and disinflationary pressures. If the mainstream won’t look at the dollar for those, like it should, then at least look at what happens in those places for when the (euro)dollar’s disruptions are ongoing. It’s enough to give you some solid indications so as to check whether or not they are; or, if for more than just blind hope, there’s any reasonable, grounded expectation they’ve actually abated based on more than just uninformed central banker opinion. 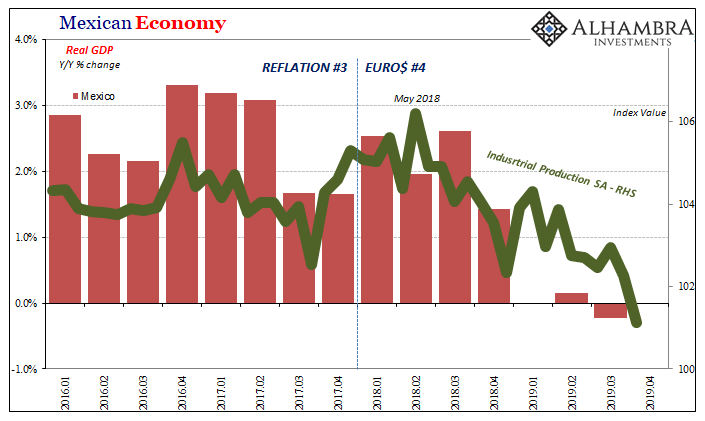