Not COVID-19, Watch For The Second Wave of GFC2

Not COVID-19, Watch For The Second Wave of GFC2

I guess in some ways it’s a race against the clock. What the optimists are really saying is the equivalent of the old eighties neo-Keynesian notion of filling in the troughs. That’s what government spending and monetary “stimulus” intend to accomplish, to limit the downside in a bid to buy time.

Time for what? The economy to heal on its own. Fill up the bathtub, so to speak, with artificial stimulus water (aggregate demand) until such time as the basin stops leaking and it’s that much of a shorter way to go for the water level to rise back to normal without the need for further assistance.

What happens in the trough is what can make the worst kinds of troughs; second and third order effects where instead the negative forces are amplified and the recession becomes worse than “it needs to be.” That’s the Keynesian motto, essentially.

In some ways, though, they were too late for this one. The overreaction shutting everything down willy nilly as well as GFC2 took away time and space (to use a sports metaphor). The window for a successful outcome has already been perilously narrowed. What I mean is:

Americans have skipped payments on more than 100 million student loans, auto loans and other forms of debt since the coronavirus hit the U.S., the latest sign of the toll the pandemic is taking on people’s finances.

Not only that, according to the same WSJ article, 106 million have “enrolled in deferment, forbearance or some other type of relief since March 1”, a level that is triple what was estimated at the end of April just one month prior.

As I wrote before, this isn’t about share prices; except how Jay Powell intends to use the stock market as a means to try to offset any nasty consequences of regular folks and businesspeople from getting the idea conditions are anything other than awesome. Not today; everyone knows it sucks today. But tomorrow things will be soaring again, just hang in there like the S&P shows you!

One hundred and six million in the default pipeline, though, that can only mean the clock has already started ticking. The output of that pipeline is bankruptcy and loss, and wide distribution of both. A consumer who wins bankruptcy relief doesn’t extinguish their obligation, they’ve simply redistributed the loss to the bank or financial firm who first extended the loan.

And that means already today banks as well as markets for, say, risky corporates are preparing for the possibility – likelihood – of pain only beginning in several months’ time. That’s how long a missed payment takes to become an impairment. Neither needs an actual default for liquidity to just vanish, a lesson everyone (but Economists) learned very well from GFC1.

Even if 90% (or even 95%!) of that 106 million gets worked out before default, that still leaves an overwhelming blow to first the financial system.

That’s why I wrote yesterday Jay Powell’s magic word program in especially corporate credit is at best temporary. There’s a looming showdown (watch what hedge fund lawyers are up to right now, sheltering assets) and more than one wave to it (a second wave of GFC2 is far more likely, and likely far more damaging, than a second hit from COVID-19).

So, in Powell’s mind what he has to do is get the business sector high on “money printing” and the 100% guaranteed, no-question-about-it, don’t-you-dare-fret inflationary environment this will bring. If he can do that, he believes business reaction will be positive enough that it then will limit the number of bankruptcies as well as other negative pressures before they can spiral (further) out of control.

A whole lot of happy thoughts for a future not yet written. Lacking any effective money, that’s monetary policy today.

Except, the future is already partially written; the clock started ticking the moment GFC2 completely surprised Chairman We Saw It Coming. Loan officers have said so as have that 106 million-strong group. 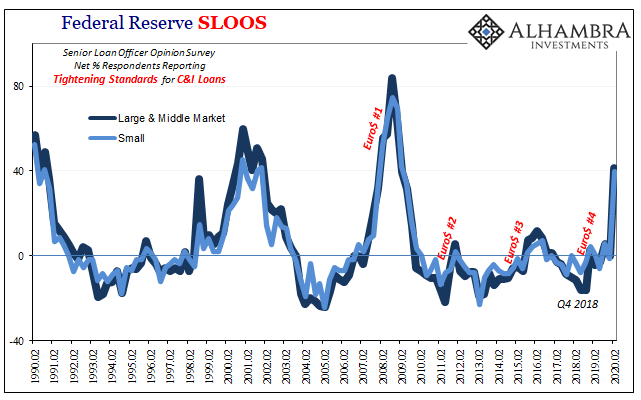 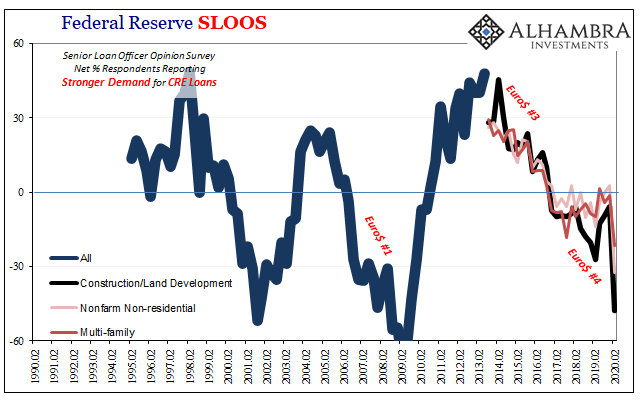 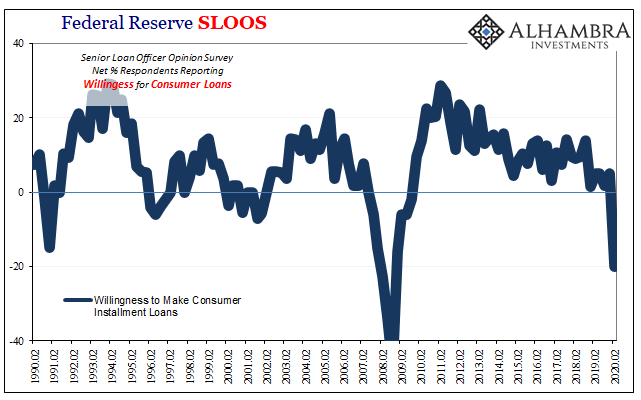 Before any of that, though, the task is much more basic. Just get everyone, or as close to everyone as humanly possible, back to work by next month, next week. If only it was that easy.

The “V” people all seem to think that it is; the government flipped a switch turning off the economy, so just toggle it in the other direction and stop worrying. Everything merely frozen in time, reanimated easily by the first thaw and warmth of reopened movement.

To that end, there’s been a fundamental misreading of what PMI’s have to say on the matter. These, like the economy itself, bottomed out two months ago in April. Since, they’ve been rising, rapidly, which has been taken as a sign of the “V.” As economies have reopened to some degree, the upward leg of these sentiment indices is in too many places equated with a return to growth.

To begin with, that’s not actually what these PMI’s are indicating. Since they are entirely second derivatives, the June flash estimate from Markit, for example, is simply stating that the contraction portion may be nearing its end. Not there yet, the economy is still contracting if at a much slower rate. 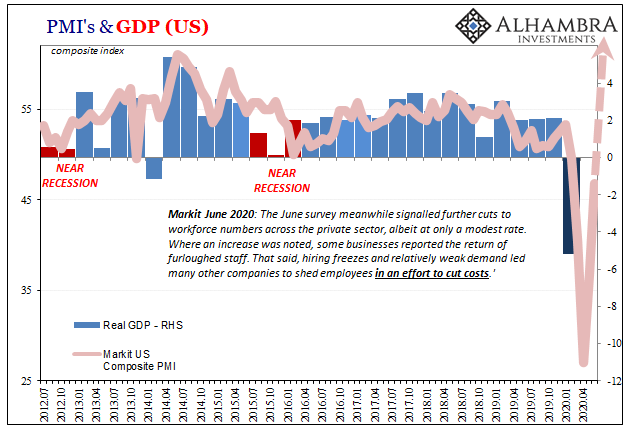 Markit’s US Composite PMI surged in June, registering 46.8 in the latest estimate compared to 37.0 in May and a low of 27.0 posted in April. That number by itself doesn’t equate to growth, it only suggests, again, the rate of contraction has slowed substantially.

We’re still in the downturn.

Not only that, the rate of indicated contraction in June remains rather steep – it’s only when compared to the absolute collapse in April that it seems a remarkable improvement. 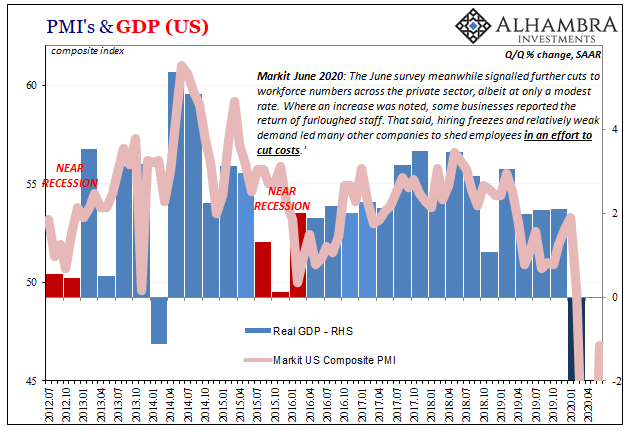 What’s instead happening is that the upward slope of the PMI, like the employment report, is being extrapolated in a straight line into the months ahead. After all, you can’t go from steep contraction to rapid growth and recovery unless you first traverse these middle steps like 46.8 on the way to 80 or 85.

Far too many are assuming that’s what will happen; worse, they are making that assumption based on what they are led to believe is tremendous “stimulus.” Even the Markit press release cautions on both accounts:

Any return to growth will be prone to losing momentum due to persistent weak demand for many goods and services, linked in turn to ongoing social distancing, high unemployment and uncertainty about the outlook, curbing spending by businesses and households. The recovery could also be derailed by new waves of virus infections. Continual vigilance by the Fed, US Treasury and health authorities will therefore be required to keep any recovery on track.

In other words, yes, the prospects for second and third order effects (which we’ve already observed, quite severe in key places) that Jay Powell will have to be on his toes about. And that, more than anything, is why he lied his ass off on 60 Minutes, especially that whole part about “so we saw it coming.” He’s got to gaslight the world into believing they really are a vigilant group instead of the bunch of bumbling, incompetent bureaucrats they otherwise have shown themselves to be (time and time again).

The June survey meanwhile signalled [sic] further cuts to workforce numbers across the private sector, albeit at only a modest rate. Where an increase was noted, some businesses reported the return of furloughed staff. That said, hiring freezes and relatively weak demand led many other companies to shed employees in an effort to cut costs.

Markit’s data a glaring echo of the continuously terrifying level of jobless claims; a “modest rate” in the PMI data if compared only to itself. 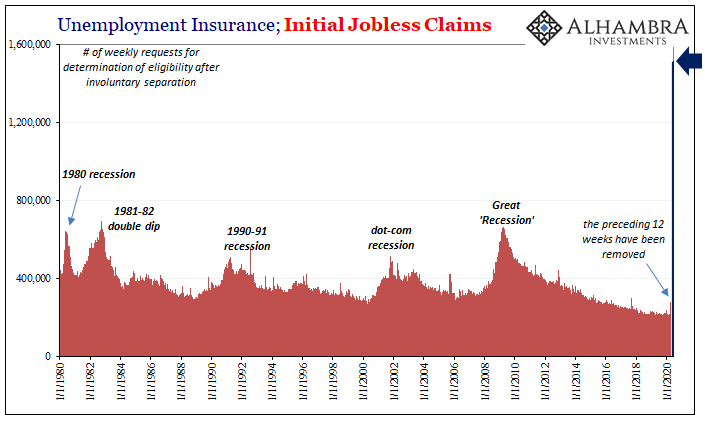 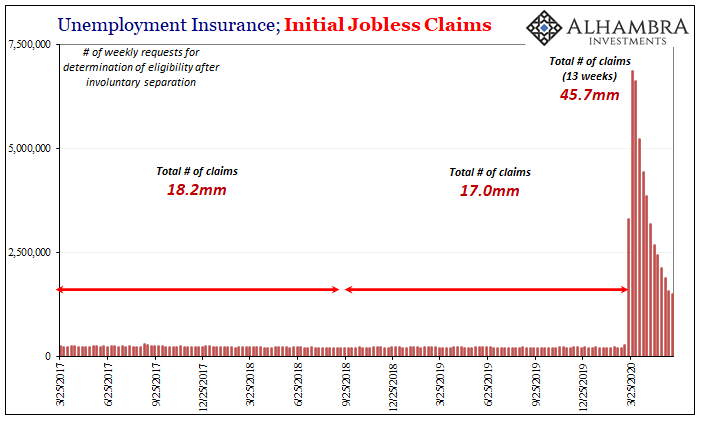 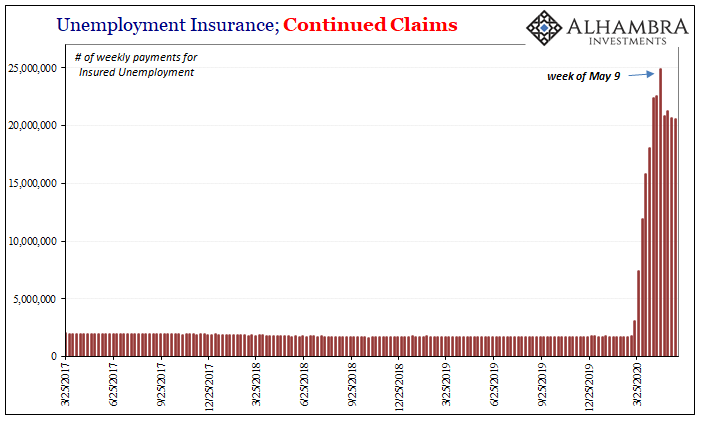 If companies are in cost-cutting mode, and they obviously are, then that immediately puts a ceiling on the right side of the hoped-for “V” (arguing dead against the straight-line extrapolation) and then sets up the potential second wave of GFC2 and economic contraction. How? A weak labor market means instead of 90% of the 106 million work out their loan (or rent) situation before it goes too far, only 85% maybe even just 80% do!

Heaven forbid something like 75%. Ninety percent would already be big trouble.

Being unable to get close to everyone who has lost a job (or just lost income from wage or salary cuts plus those working less hours) back into their former groove is the real bogeyman lurking out there just over the visible time horizon. And that horizon is shrinking with every added missed payment due to a lost or shrunken paycheck.

Less consumer spending means curtailed revenues, no pathway to restore profitability, and therefore even more, say it with me, cost cutting by businesses.

It’s not the waves of bankruptcies that spell doom, such comes long before them. All you need is for markets, credit markets, to begin suspecting it’s a good probability. If that happens, like 2008 or March 2020, just watch how quickly it unravels and market liquidity up and disappears (again), how fragile things really are even though there’s that whole “flood” thing.

Despite Jay Powell’s (limited) success at the NYSE and (unqualified success) in the financial media, those seemingly little two words keep coming up in way too many places: cut costs.