Treasury Secretaries, like Federal Reserve Chairmen, they don’t talk much about or pay much attention to the market’s need for collateral. They may pay some, but not specifically collateral if only under the vaguely defined category of “market consideration” when setting auction supply. Collateral shortages have come and gone, however dreadful, never eliciting a direct response insofar as supply has been concerned.

The lone exception was last year when Treasury bill supply exploded under the CARES Act. Quite by accident, the government gave the market just what it needed after Jay Powell’s ridiculous not-QE5 had needlessly and carelessly locked away those very instruments.

Though Janet Yellen was first Fed Chairman before becoming Treasury Secretary, she’s given no indication in either job that collateral squeezes come up on her infamous dashboard. From the very beginning of that thing, early on in 2014, her inflation watchlist contained a bunch of data but nothing from the Treasury market or FRBNY dealer sources which would have been far more helpful in sorting reality for her (instead, she kept saying “transitory” with regard to inflation when collateral, especially October 15, 2014, would’ve shown her the right way).

Yet, on March 18 of this year maybe Yellen blinked. The 4-week bill auction undertaken on that day was an eye opener even for this year when bill auctions keep figuring more and more interest.

Before getting to that, the week before on March 11, the 4-week auction on that day had produced a high yield at 3bps, the median two, and zero at the low. This was a $30 billion offering.

And the reason it still had been down at $30 billion was the monkeying around in TGA. More “stimulus”, looming debt ceiling deadlines, so despite clear demand for these instruments Treasury has been stripping supply from the market anyway (eliminating cash management bills first).

What the government said about bills in its last quarterly refunding statement was:

Treasury may also increase the auction size of one or more of its remaining bill offerings to moderate the pace of decline in the aggregate supply of bills outstanding in anticipation of the existing 15- and 22-week CMBs maturing without reissuance.

That March 18 auction came out with significant lower yields than the week before, practically zero all around (the high was just half a bip), even though Yellen’s Department actually did increase the size; it had been bumped up from $30 billion March 11 to $40 billion and still overwhelming demand.

The several which followed had backed off the zero lower bound (which isn’t a boundary for bills) until yesterday’s. Again, $40 billion on offer April 29 and straight zeroes for equivalent yields; high, median, as well as low. 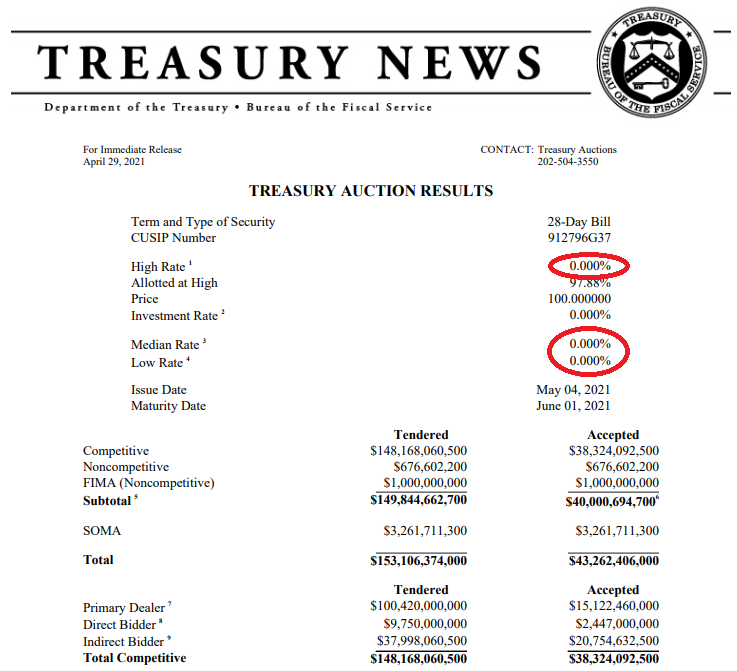 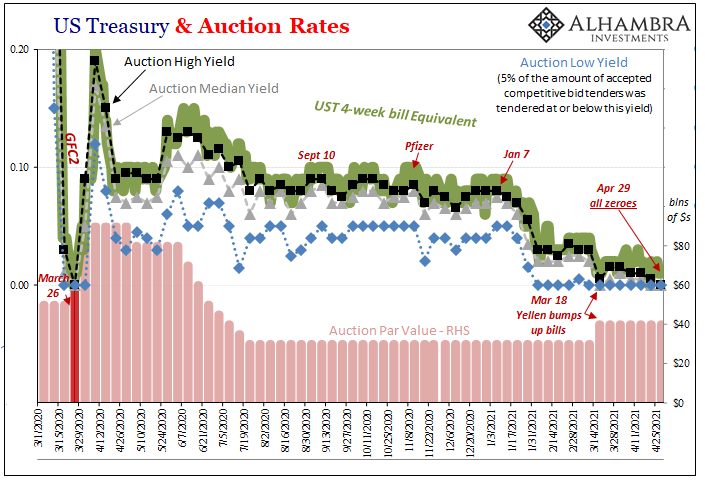 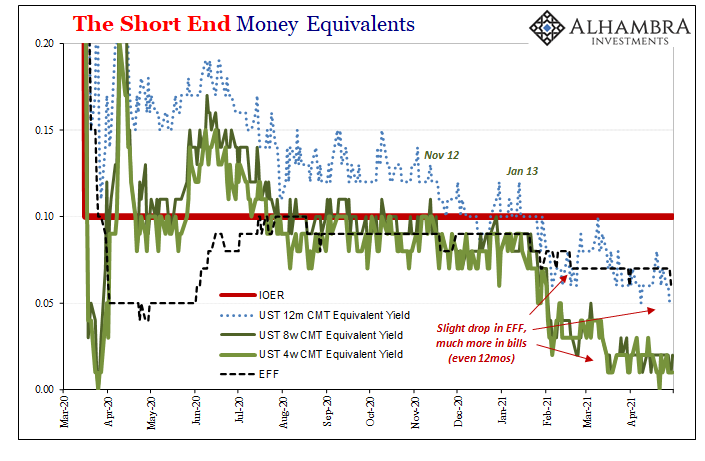 Apparently, Treasury had acted according to its statement of adjusting bill supply to “market demand” without, of course, figuring out or even caring why demand would be so high to begin with. Now, today, with bills right at the zero lower bound, and bill yields in the secondary market further compressed out to the 12-month tenor, it seems worth at least asking some questions.

This won’t happen because, by and large, the conventional explanation suits these suits. And that always relates to the TGA and excess reserves, in the current case being drawn down transferring additional reserves to commercial banks which have, so the theory goes, “flooded” the money markets with “excess” liquidity including demand for bills (from MMF’s, reportedly). 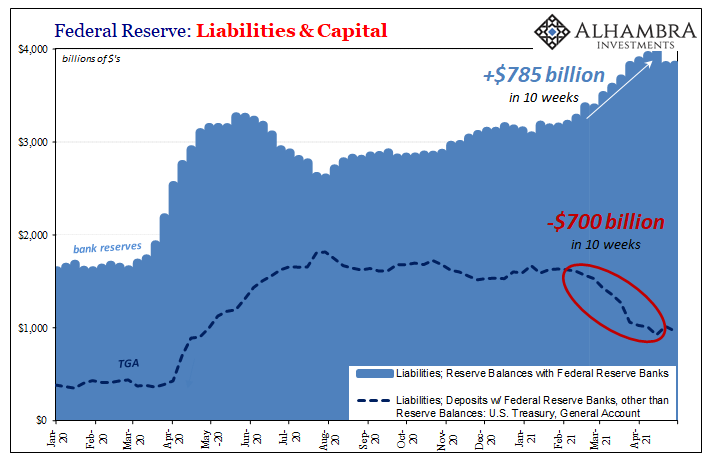 The problem with that view (one of them, anyway) is that the TGA balance settled weeks ago – in mid-April. The current wave of draining the Treasury’s checking account at the Fed reached its near-term limits two weeks ago and yet the 4-week bill auction yesterday and its triple zeroes at the higher $40 billion level.

I wrote earlier this month of these gross inconsistencies:

So, it is vaccines, reopenings, government checks already cashed, and a flood of money that is shortly to equal last year’s.

Pardon me, but where the hell is all the inflationary reflation bond selling?

Further contradicting the TGA/flood theory is how Treasury note, bond, and TIPS yields have since followed the bill example (lower) rather than the reflation trade (higher) more consistent with what should have been this deluge of money (if reserves had been useful money). And beyond markets, PCE Deflators and CPI’s around the world sitting on only tame levels.

The more interesting breakage will be if perhaps when a 4-weeker goes off with enough overwhelming demand that the low or even median auction yield would work out to less than zero (raising the question already if this would have been the case in yesterday’s sale).

Currently, Treasury does not permit such a thing but it has been forced to consider this in the past.

In early 2012, the Treasury Borrowing Advisory Committee, or TBAC made up of dealer reps who advise (ineffectively) the Treasury Department, recommended the government seriously consider this considering that bill rates were then pinned near zero, too (for reasons they believed had to do with “abundant reserves” which was clearly irrelevant given the liquidity problems having to do with collateral all throughout especially the latter half of 2011; see what I mean about ineffective advice?)

The question was asked if it made sense for Treasury to permit bids and awards at negative interest rates in marketable Treasury bill auctions. DAS Rutherford noted that there were operational issues associated with such a rule change, but that the hurdles were not insurmountable. It was the unanimous view of the committee that Treasury should modify auction regulations to permit negative rate bidding and awards in Treasury bill auctions as soon as feasible.

There is also the complication, sort of, with the Federal Reserve’s RRP. The reverse repo is meant to be what the Fed considers the lower of its “double floor” (really a wholesale soft floor paired with a depository soft ceiling, IOER) which, as I’ve noted many times before, Treasury bills have ignored again for reasons nobody wants to investigate (at least not publicly).

In other words, none of this adds up to a world flooded with liquidity as foreseen by the conventional explanations which have added up only to different shades of wrong for years, more than a decade. Here we are yet again facing the opposite of those things starting with bills pinned against the zero limit at auction and wondering when the secondary market finally concedes that line.

Not for reflation let alone inflationary purposes, oh no, instead huge demand for pristine collateral almost certainly related to ongoing constraints on dealers (as evidenced by hedge funds and their continued implied popularity of a specific basis trade). That’s the whole reason why RRP figures; there would have to be some increased value in bills that would price them at a yield less than reverse repo.

We know what that is even if officials don’t or won’t. 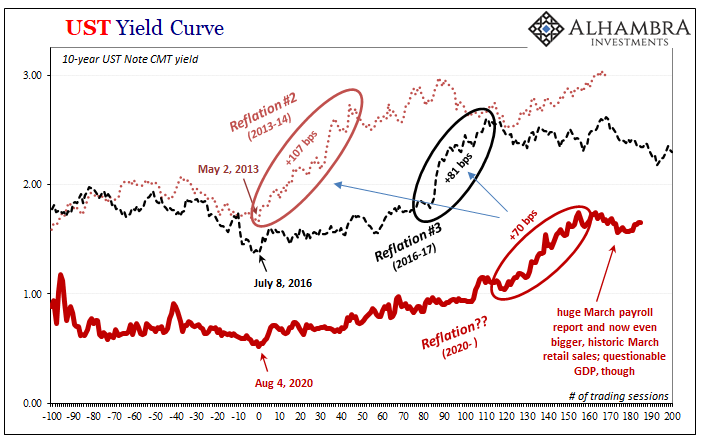 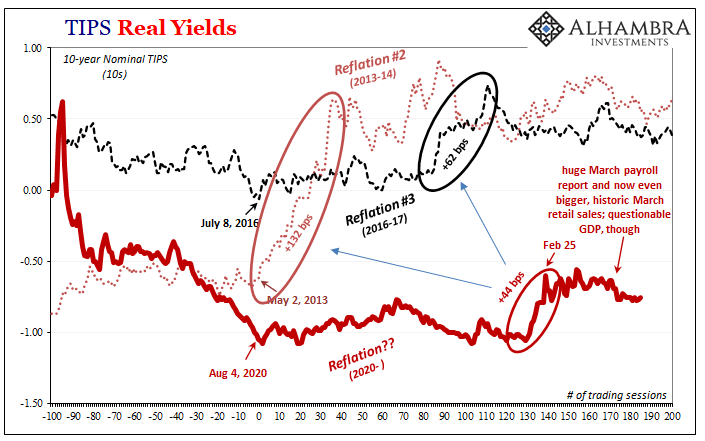 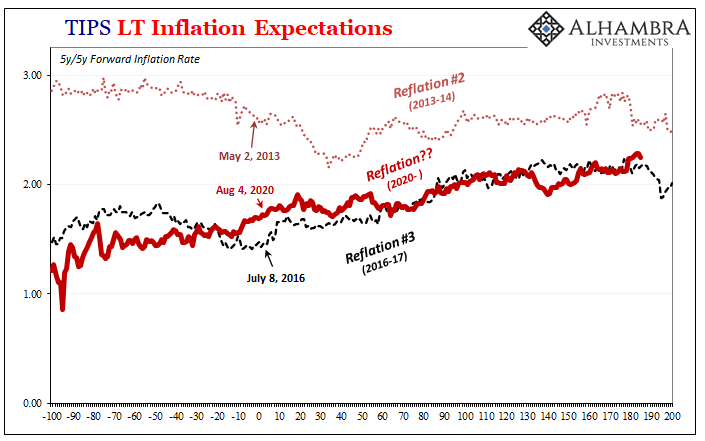 This does not mean the system is poised on the precipice of another disaster, but it does immediately propose limitations in the financial system therefore real economy which account for yet another developing episode of missing inflation (as well as its recovery momentum) globally. Beyond that, fragility which suggests the monetary system isn’t going to easily suffer any kind of shock – even if there isn’t one indicated right now.

It’s a complicated and tangled mess, yet in one sense it’s pretty simple. Bill yields pulled down by some kind of monetary gravity (collateral) defying the “flood” seems to be setting the mood and the tone for the bond market as a whole. And this began before Feb 24 and Fedwire, which may also account for why that particular little nothing apparently became a short-term nearing intermediate-term something. 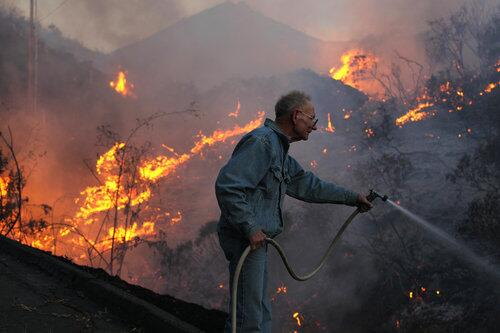